Binary TreesPage: 1 Treesby Nick ParlanteThis article introduces the basic concepts of Binary Trees , and then works through a series of practice problems withsolution code in C/C++ and Java. Binary Trees have an elegant recursive pointer structure, so they are a good way tolearn recursive pointer algorithms. ContentsSection 1. Binary Tree Structure -- a quick introduction to Binary Trees and the code that operates on them Section 2. Binary Tree Problems -- practice problems in increasing order of difficulty Section 3. C Solutions -- solution code to the problems for C and C++ programmers Section 4. Java versions -- how Binary Trees work in Java, with solution code Stanford CS Education Library -- #110 This is article #110 in the Stanford CS Education Library. This and other free CS materials are available at thelibrary ( ). That people seeking education should have the opportunity to find article may be used, reproduced, excerpted, or sold so long as this paragraph is clearly reproduced.

Binary Trees Page: 3 http://cslibrary.stanford.edu/110/ BinaryTrees.html Typical Binary Tree Code in C/C++ As an introduction, we'll look at the code for the two most ...

1 Binary TreesPage: 1 Treesby Nick ParlanteThis article introduces the basic concepts of Binary Trees , and then works through a series of practice problems withsolution code in C/C++ and Java. Binary Trees have an elegant recursive pointer structure, so they are a good way tolearn recursive pointer algorithms. ContentsSection 1. Binary Tree Structure -- a quick introduction to Binary Trees and the code that operates on them Section 2. Binary Tree Problems -- practice problems in increasing order of difficulty Section 3. C Solutions -- solution code to the problems for C and C++ programmers Section 4. Java versions -- how Binary Trees work in Java, with solution code Stanford CS Education Library -- #110 This is article #110 in the Stanford CS Education Library. This and other free CS materials are available at thelibrary ( ). That people seeking education should have the opportunity to find article may be used, reproduced, excerpted, or sold so long as this paragraph is clearly reproduced.

2 Copyright2000-2001, Nick Parlante, Related CSLibrary ArticlesLinked List Problems ( ) -- a large collection of linked list problemsusing various pointer techniques (while this Binary tree article concentrates on recursion) Pointer and Memory ( ) -- basic concepts of pointers and memory The Great Tree-List Problem ( ) -- a great pointer recursion problemthat uses both Trees and lists Section 1 -- Introduction To Binary TreesA Binary tree is made of nodes, where each node contains a "left" pointer, a "right" pointer, and a data "root" pointer points to the topmost node in the tree. The left and right pointers recursively point to smaller"subtrees" on either side. A null pointer represents a Binary tree with no elements -- the empty tree. The formalrecursive definition is: a Binary tree is either empty (represented by a null pointer), or is made of a single node,where the left and right pointers (recursive definition ahead) each point to a Binary tree.

3 Binary TreesPage: 2 A " Binary search tree" (BST) or "ordered Binary tree" is a type of Binary tree where the nodes are arranged in order:for each node, all elements in its left subtree are less-or-equal to the node (<=), and all the elements in its rightsubtree are greater than the node (>). The tree shown above is a Binary search tree -- the "root" node is a 5, and itsleft subtree nodes (1, 3, 4) are <= 5, and its right subtree nodes (6, 9) are > 5. Recursively, each of the subtrees mustalso obey the Binary search tree constraint: in the (1, 3, 4) subtree, the 3 is the root, the 1 <= 3 and 4 > 3. Watch outfor the exact wording in the problems -- a " Binary search tree" is different from a " Binary tree". The nodes at the bottom edge of the tree have empty subtrees and are called "leaf" nodes (1, 4, 6) while the othersare "internal" nodes (3, 5, 9). Binary Search Tree NicheBasically, Binary search Trees are fast at insert and lookup.

4 The next section presents the code for these twoalgorithms. On average, a Binary search tree algorithm can locate a node in an N node tree in order lg(N) time (logbase 2). Therefore, Binary search Trees are good for "dictionary" problems where the code inserts and looks upinformation indexed by some key. The lg(N) behavior is the average case -- it's possible for a particular tree to bemuch slower depending on its shape. StrategySome of the problems in this article use plain Binary Trees , and some use Binary search Trees . In any case, theproblems concentrate on the combination of pointers and recursion. (See the articles linked above for pointer articlesthat do not emphasize recursion.) For each problem, there are two things to The node/pointer structure that makes up the tree and the code that manipulates it The algorithm, typically recursive, that iterates over the tree When thinking about a Binary tree problem, it's often a good idea to draw a few little Trees to think about thevarious cases.

5 Binary TreesPage: 3 Binary Tree Code in C/C++As an introduction, we'll look at the code for the two most basic Binary search tree operations -- lookup() andinsert(). The code here works for C or C++. Java programers can read the discussion here, and then look at the Javaversions in Section 4. In C or C++, the Binary tree is built with a node type like struct node { int data; struct node* left; struct node* right; } Lookup()Given a Binary search tree and a "target" value, search the tree to see if it contains the target. The basic pattern ofthe lookup() code occurs in many recursive tree algorithms: deal with the base case where the tree is empty, dealwith the current node, and then use recursion to deal with the subtrees. If the tree is a Binary search tree, there isoften some sort of less-than test on the node to decide if the recursion should go left or right.

6 /* Given a Binary tree, return true if a node with the target data is found in the tree. Recurs down the tree, chooses the left or right branch by comparing the target to each node. */ static int lookup(struct node* node, int target) { // 1. Base case == empty tree // in that case, the target is not found so return false if (node == NULL) { return(false); } else { // 2. see if found here if (target == node->data) return(true); else { // 3. otherwise recur down the correct subtree if (target < node->data) return(lookup(node->left, target)); else return(lookup(node->right, target)); } } } The lookup() algorithm could be written as a while-loop that iterates down the tree. Our version uses recursion tohelp prepare you for the problems below that require recursion. Pointer Changing CodeThere is a common problem with pointer intensive code: what if a function needs to change one of the pointerparameters passed to it?

7 For example, the insert() function below may want to change the root pointer. In C andC++, one solution uses pointers-to-pointers (aka "reference parameters"). That's a fine technique, but here we willuse the simpler technique that a function that wishes to change a pointer passed to it will return the new value ofthe pointer to the caller. The caller is responsible for using the new value. Suppose we have a change() functionBinary TreesPage: 4 may change the the root, then a call to change() will look like // suppose the variable "root" points to the tree root = change(root); We take the value returned by change(), and use it as the new value for root. This construct is a little awkward, butit avoids using reference parameters which confuse some C and C++ programmers, and Java does not have referenceparameters at all. This allows us to focus on the recursion instead of the pointer mechanics.

8 (For lots of problemsthat use reference parameters, see CSLibrary #105, Linked List Problems, ). Insert()Insert() -- given a Binary search tree and a number, insert a new node with the given number into the tree in thecorrect place. The insert() code is similar to lookup(), but with the complication that it modifies the tree described above, insert() returns the new tree pointer to use to its caller. Calling insert() with the number 5 onthis 2 / \ 1 10 returns the 2 / \ 1 10 / 5 The solution shown here introduces a newNode() helper function that builds a single node. The base-case/recursionstructure is similar to the structure in lookup() -- each call checks for the NULL case, looks at the node at hand, andthen recurs down the left or right subtree if needed. /* Helper function that allocates a new node with the given data and NULL left and right pointers.

9 */ struct node* NewNode(int data) { struct node* node = new(struct node); // "new" is like "malloc" node->data = data; node->left = NULL; node->right = NULL; return(node); } /* Give a Binary search tree and a number, inserts a new node with the given number in the correct place in the tree. Returns the new root pointer which the caller should then use (the standard trick to avoid using reference parameters). */ struct node* insert(struct node* node, int data) { Binary TreesPage: 5 // 1. If the tree is empty, return a new, single node if (node == NULL) { return(newNode(data)); } else { // 2. Otherwise, recur down the tree if (data <= node->data) node->left = insert(node->left, data); else node->right = insert(node->right, data); return(node); // return the (unchanged) node pointer } } The shape of a Binary tree depends very much on the order that the nodes are inserted.

10 In particular, if the nodesare inserted in increasing order (1, 2, 3, 4), the tree nodes just grow to the right leading to a linked list shape whereall the left pointers are NULL. A similar thing happens if the nodes are inserted in decreasing order (4, 3, 2, 1). Thelinked list shape defeats the lg(N) performance. We will not address that issue here, instead focusing on pointersand recursion. Section 2 -- Binary Tree ProblemsHere are 14 Binary tree problems in increasing order of difficulty. Some of the problems operate on Binary searchtrees (aka "ordered Binary Trees ") while others work on plain Binary Trees with no special ordering. The nextsection, Section 3, shows the solution code in C/C++. Section 4 gives the background and solution code in Java. Thebasic structure and recursion of the solution code is the same in both languages -- the differences are superficial. Reading about a data structure is a fine introduction, but at some point the only way to learn is to actually try tosolve some problems starting with a blank sheet of paper. 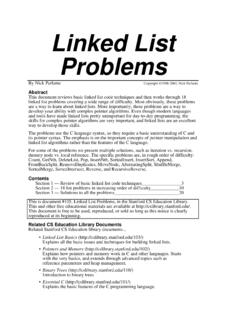 3 Section 1 — Linked List Review This section is a quick review of the concepts used in these linked list problems. For more detailed coverage, see Link List Basics (http://cslibrary.stanford.edu/103/) where all of

Essential Perl Page: 1 Essential Perl This document is a quick introduction to the Perl language. Perl has many features, but you can get pretty far with just the … 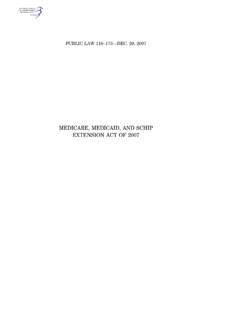 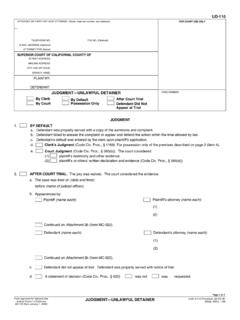 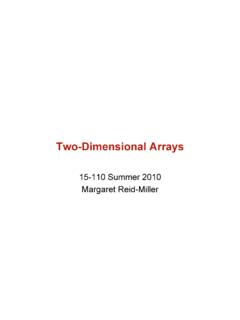 Summer 2010 15-110 (Reid-Miller) Similarity with 1D Arrays • Each element in the 2D array must by the same type, • either a primitive type or object type. • Subscripted variables can be use just like a variable: