5 – but also in terms of the environmental impact of the decomposition products (e.g. fragments). An example where the rate of biodegradation is important and highly limited is

2 polymer substance of high molar mass that is composed of repeating structural units. Plastic material composed mainly of polymers . Biodegradable plastics plastics that will fully decompose to carbon dioxide, methane, water, biomass and inorganic compounds under aerobic or anaerobic conditions and the action of living organisms. Biodegradation Biodegradation or biotic degradation is a specific property of certain plastic materials - that is, of the polymers these materials are made of. It is a process by which a polymer material decomposes under the influence of biotic components (living organisms). Microorganisms (bacteria, fungi, algae).

3 Recognize polymers as a source of organic compounds ( simple monosaccharides, amino acids, etc.) and energy that sustain them. In other words, Biodegradable polymers are their food. Under the influence of intracellular and extracellular enzymes (endo- and exoenzymes) the polymer undergoes chemical reactions and the polymer degrades by the process of scission of the polymer chain, oxidation, etc. The result of this process that can be affected by a great number of different enzymes are increasingly smaller molecules, which enter into cellular metabolic processes (such as the Krebs cycle), generating energy and turning into water, carbon dioxide, biomass and other basic products of biotic decomposition.

4 These products are non -toxic and occur normally in nature and in living organisms. This process turns artificial materials, such as plastics , into natural components. A process, in which an organic substance, such as a polymer , is converted to an inorganic substance, such as carbon dioxide, is called mineralization. There are many factors involved in the process of biodegradation different combinations of polymer structures, numerous enzymes produced by microorganisms, and variable reac- tion conditions which make it difficult to define biodegradation in general terms. At their 2. core, chemical reactions that take place during biodegradation can be classified into two groups: those based on oxidation and those based on hydrolysis.

5 These reactions can occur either simultaneously or successively. The decomposition of condensation polymers ( polyesters and polyamides) takes place through hydrolysis, while decomposition of polymers in which the main chain contains only carbon atoms Microorganisms recognize Biodegradable ( polyvinyl alcohol, lignin) includes polymers as food oxidation which can be followed by hydrolysis of the products of oxidation. At the macroscopic level, the degradation is revealed through changes and deterioration of key material properties (e. g. cranking, breakage, fragmentation,..). These changes are primarily the result of the shortening of polymer chains that most define the properties of the polymer and the plastic material.

6 Analytically, the changes can be seen at the molecular level by measuring the concentration of functional groups produced during degradation. Most commonly, infrared spectroscopy is used to determine the amount of the carbonyl groups (-(C=O)-) that are the result of the oxida- tion process. However, even though their occurrence and concentration is a clear indication of the unfolding of the process and the irreversible chemical changes of the polymer that is now becoming increasingly more susceptible to chain scission, the occurrence of carbonyl groups does not imply polymer chain scission, which substantially affects the mechanical properties of the material.

8 Users can observe the effects of degradation of mechanical properties as lessened bearing capacity and quick or simple decomposition of the material. This process can be affected by non-living ( ultraviolet light, heat, water) or living factors (enzymes, organisms). Decomposition generally begins with fragmentation, the FRAGMENTATION. material that is exposed to living or non-living factors +. undergoes a chemical decomposition of the polymer and therefore decomposes mechanically (fragments). In the next MINERALIZATION. phase, the products of this decomposition are mineralized by =. microorganisms. This second phase is a necessary step that BIODEGRADATION.

9 Characterizes this process as biodegradation, because the partially degraded polymers (fragments) are hereby metabolized into end products. There are other cases (oxo-degradable materials) where the material undergoes a quick fragmentation under the influence of heat and UV light but the mineralization stage is very slow, which means that the relatively inert micro particles of the plastic material remain that have a poor susceptibility to biodegradation. 3. The final stage of biodegradation is determined by the mineralization level. Because organic carbon is converted to carbon dioxide in the process of aerobic metabolism, the most widely used method of monitoring this stage is by measuring the amount of carbon dioxide formed in a closed system.

10 To ensure proper results, adequate conditions must be maintained in the closed system (humidity, temperature, pH, ab- sence of toxic substances) for the existence of the microorganism culture. The method consists of determining the share or amount of carbon in a polymer with a known structure and known mass. This is followed by precise measurements to establish the amount of carbon that was converted to carbon dioxide during biodegradation. At its core, this process is similar to human metabolism, where food is converted to energy and exhaled as carbon dioxide. Alternatively, biodegradation can also be monitored based on measuring the oxygen consumption (which is converted to carbon dioxide) within the closed system.

4 © Oxo-biodegradable Plastics Association. Registered office The Old Exchange 12 Compton Road, London SW19 7QD, England A far greater impact on landfill space would be made by diverting away from landfill 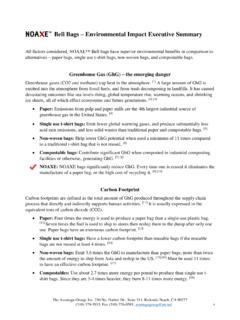 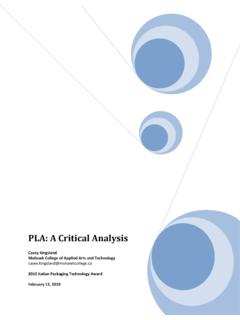 2 PLA: A Critical Analysis Introduction Today the world is quickly coming to realize the impact of packaging on human life. The world is beginning to see the effects of our existence on the planet.

Intrinsic value proposition for using PLA-based coatings Bio-based plastics, in which the fossil carbon is replaced by bio/renewable-based carbon, offer the intrinsic value 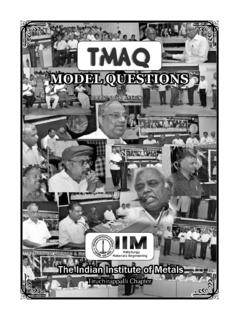 3 SCOPE OF THE QUIZ History and evolution of materials: Origin of names of minerals and metals, use of metals in the early ages, metal extraction, 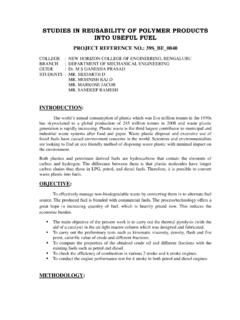 STUDIES IN REUSABILITY OF POLYMER PRODUCTS … 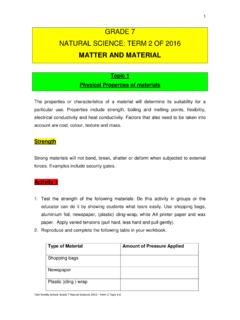