Breaking The Drama Triangle The Drama Triangle is a model of dysfunctional social interaction, created by psychotherapist Stephen Karpman. Each point on the Triangle represents a common and ineffective response to conflict, one more likely to prolong disharmony than to end it. Rescuer Persecutor Victim The Drama Triangle Participants in a Drama Triangle create misery for themselves and others. The goal is to transform this lose-lose situation and create a more positive outcome for everyone. Each player in this particular mind game begins by assuming one of three archetypical roles: Victim, Rescuer, or Persecutor.

1 Breaking The Drama Triangle The Drama Triangle is a model of dysfunctional social interaction, created by psychotherapist Stephen Karpman. Each point on the Triangle represents a common and ineffective response to conflict, one more likely to prolong disharmony than to end it. Rescuer Persecutor Victim The Drama Triangle Participants in a Drama Triangle create misery for themselves and others. The goal is to transform this lose-lose situation and create a more positive outcome for everyone. Each player in this particular mind game begins by assuming one of three archetypical roles: Victim, Rescuer, or Persecutor.

2 Victims are helpless and hopeless. They deny responsibility for their negative circumstances, and deny possession of the power to change them. They do less than 50%, won't take a stand, act super-sensitive , wanting kid glove treatment, and pretend impotence and incompetence. Rescuers are constantly applying short-term repairs to a Victim's problems, while neglecting their own needs. They are always working hard to help other people. They are harried, tired, and often have physical complaints. They are usually angry underneath and may be a loud or quiet martyr in style.

3 They use guilt to get their way. Persecutors blame the Victims and criticize the enabling behavior of Rescuers, without providing guidance, assistance or a solution to the underlying problem. They are critical and unpleasant and good at finding fault. They often feel inadequate underneath. They control with threats, order, and rigidity. They can be loud or quiet in style and sometimes be a bully. Players sometimes alternate or switch roles during the course of a game. For example, a Rescuer pushed too far by a Persecutor will switch to the role of Victim or counter-Persecutor.

4 Victims depend on a savior, Rescuers yearn for a basket case and Persecutors need a scapegoat. While a healthy person will perform in each of these roles occasionally, pathological role-players actively avoid leaving the familiar and comfortable environment of the game. Thus, if no recent misfortune has befallen them or their loved ones, they will often create one. In each case, the Drama Triangle is an instrument of destruction. The only way to escape the Drama Triangle is to function as an adult and not participate in the game.

5 HOW THE GAME IS PLAYED. A good example of the game could be this fictitious argument between John and Mary, a married couple. Sometimes the Rescuer's point seems calm and even reasonable. If the words placate, soothe, calm, explain or justify, it can be considered a Rescuer response--it is an attempt to move the other person from their position. In order to give a visual of the way the participants move from one point of the Triangle to another, the Persecutor position is shown in red, the Rescuer in blue and the Victim in green.

6 John: I can't believe you burnt dinner! That's the third time this month! (P). Mary: Well, little Johnny fell and skinned his knee, it burned while I was busy getting him a bandage. (R). John: You baby that boy too much! (P). Mary: You wouldn't want him to get an infection, would you? I'd end up having to take care of him while he was sick. (V). John: He's big enough to get his own bandage. (R). Mary: I just didn't want him bleeding all over the carpet. (R). John: You know, that's the problem with these kids! They expect you to do everything!

8 You always ignore the kids! (P). John: I do not, I just need time to sit and relax and unwind after working all day! You don't know what it's (V). Mary: Sure, as if taking care of the house and kids isn't WORK! (P). Anyone reading this article could undoubtedly continue this argument indefinitely. What is of perhaps more interest is how one can remove oneself from the Triangle , which, as the example makes clear, can be exhausting. The simplest method is the non-defensive response. This works at any point no matter what the role the other person is taking, as it doesn't give a cue as to the next response.

9 For instance: Mary: Well maybe if you could have hauled your ass out of your chair for a minute while I was busy, it wouldn't have gotten burned! (P). John: Yes, that's true. Although Mary may attempt to restart the cycle by continuing to scold, if John continues in the same vein, Mary will eventually run out of things to say. Unless Mary is actually abusive, in which case care should be used in employing this method, John's calm response invites discussion rather than continued wrangling. She might realize that she didn't ask him for help, and they might well be able to resolve the situation by planning on a course of action should something similar arise in the future.

10 It works just as well for the victim role: John: I do not, I just need time to sit and relax and unwind after working all day! You don't know what it's (V). Mary: I'm sorry you're feeling so tired. This acknowledges any real problem the other person might have without continuing the dance. Again, the other person may attempt to restart the cycle by continuing to complain, but again, with continued non-defensive responses, the other person will run out of things to say. While the "rescuer" role is seemingly the least problematic of the three points of the Triangle , it still is a part of a non-communicative cycle, and thus should be treated in the same manner. 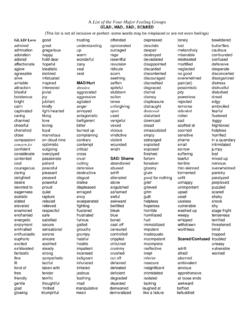 A List of the Four Major Feeling Groups - Goulet John

A List of the Four Major Feeling Groups GLAD,MAD,SAD,SCARED (This list is not all inclusive or perfect--some words may be misplaced or are not even feelings) GLAD/ Love good trusting offended depressed lonely bewildered 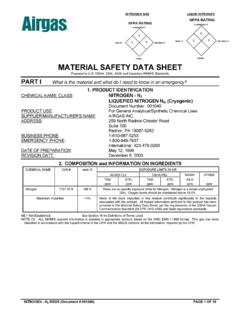 NITROGEN - N 2 MSDS (Document # 001040) PAGE 3 OF 10 .PART II What should I do if a hazardous situation occurs? 4. FIRST-AID MEASURES RESCUERS SHOULD NOT ATTEMPT TO RETRIEVE VICTIMS OF EXPOSURE TO NITROGEN WITHOUT 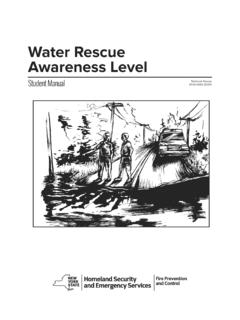 New York State Office of Fire Prevention and Control WATER RESCUE - AWARENESS LEVEL ACKNOWLEDGMENTS The preparation of this course was made possible through the assistance, cooperation and dedication of many people.

Welcome! Were excited that you [ve decided to take hild and Infant PR, and that youve chosen us to direct your learning experience. You never know when you may be called upon to … 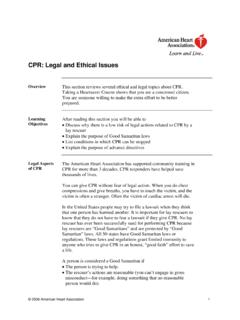 © 2006 American Heart Association 4 In some states the patient with a “no CPR” order wears “no-CPR” medical jewelry, such as a “no CPR” bracelet.

To obtain a free copy of the Injury and Illness Prevention Program or the confined space standard, or for more information on these requirements, please call the nearest Cal-

145 4 Terrorism Throughout human history, there have been many threats to the security of nations. These threats have brought about large-scale losses of life, the destruction of property, widespread illness and injury, the displacement of large numbers of