Accident of the MV “Derbyshire” • The MV DERBYSHIRE, British flagged, owned and crewed, disappeared virtually without trace when the vessel was in the Typhoon Orchid, south of Japan, or about 9 September 1980. • All on board – 42 crew members and two wives were lost. • The DERBYSHIRE was a modern (built 1976), fully equipped

2 Even in 1900 these ships attained lengths of about 150 m. The current configuration dates from the years Carriers4 Types of Bulk Carriers Bulk Carrier (Graneleiro) with/without equipment for self loading/unloading Ore Carrier (Mineraleiro) with stowage factors of about m3/t Cement Carrier (Cimenteiro) -with stowage factors of about m3/t Great Lakes ships that operate in the region of the Great Lakes, between the EUA and Canada, that are limited by the maximum width of the St. Lawrence Canal ( m); characterized by being self-unloaders (buckets/conveyors), having a large number of cargo holds and hatches and with a deadweight ranging about 26,000 38,000 Carriers5 Combined Carriers OBO Ships(ore/bulk/oil), for the carriage of solid and liquid bulk cargo ConBulkers(container/bulk), for the carriage of containers and bulk cargo, generally provided with wide hatches and lifting Carriers6 Distribution of the Types of Carriers7 Typical Sizes Small DW < 10,000 t Handysize 10,000 t < DW < 35,000 t Handymax 35,000 t < DW < 50,000 t Supramax 50,000 t DW < 60,000 t Panamax B m, 60,000 < DW < 80,000 t Capesize ships larger than Panamax or Suezmax (they can not cross the canals)

6 A pneumatic system, A system of conveyors and very often, a tower on the main deck Carriers20 Cement Carriers (3) Can be classified in deep seaand short sea(3,000 5,000 tdw) The ocean going ships have DW ~ 20,000 t, a size imposed By the cargo loading ports By the storage facilities available at the discharge Carriers21 Cement Carriers (4) The cargo, although reasonably inert, is quite demanding and require conditions of absolute dryness inside the holds, which are totally enclosed Stability must be taking into consideration because the cargo behaves almost as a liquid, sliding to one side with the heeling of the ship. The cement powder is a serious problem that requires a cautious handling to avoid the passage of the cement in the air.

7 The air exiting the cargo holds during loading is filtered and Carriers22 Cement Carriers (5) Mechanical systems are used to distribute the cargo inside the holds to guarantee that they can be completely filled Mechanical conveyors are one possible alternative to pneumatic blowers. Some systems have the capacity to load a ship at a rate of 1,500 t/h and of unloading it with a slightly lower rate. The ships are totally closed and capable of loading/unloading in any weather conditions Carriers23 Great Lakes and St. Lawrence Carriers24 Ships for the Great Lakes (1)B < m (St. Lawrence Seaway )Typical Characteristics: Generally Self-Unloaders High number of cargo holds (11 ~ 15) Carriers25 Ships for the Great Lakes (2)Typical characteristics: Second superstructure forward Very simplified hull forms Almost round bow, no Carriers26 Typical Geometry of the Midship SectionNotes: Breadth of the hatches 50% - 70% Breadth of the ship Angle of the wing-tankwith the horizontal 30 > angle of rest of the cargo Central or asymmetric tunnel, for the passage of pipingWhenever the vertical keel is replaced by 2 longitudinal girders to create a tunnel, these shall not be more than 3 meters apart (IACS) Carriers27 Cargo Zone - Typical Carriers28 Typical Sections of Ore Carriers Notes.

8 Increased height of double-bottom in comparison to bulk Carriers Section of the cargo hold Objective: Raise the position of the centre of gravity of the Carriers29 Hold/Ballast Tank for Emergency Ballast The central cargo hold of bulk Carriers can be used to carry additional ballast, in bad weather conditions This double functionality has implications at the level of the structural dimensioning of the: Double-bottom Bulkheads (AFT and FWD) Hatch Carriers30 Hatch Covers Side-Rolling Type Bulk Carriers and combined ships Hatch opening totally accessible Small interval between cargo hatches Hydraulic Carriers31 Loading/Unloading Carriers32 Accidents with Bulk Carriers (1) The question of the safety of bulk Carriers was raised after the recognition of an unacceptable number of losses of lives, ships and cargoes that attained a peak during the years 1990/91: during 1990, 20 ships and 94 lives were lost during 1991, 24 ships and 154 lives were lost.

9 The accident data base from IACS shows that: from 1983 until June 1997 inclusive, 73 bulk Carriers were lost due to known or probable structural failure. at least more than 40 ships suffered severe Carriers33 Accidents with Bulk Carriers (2) The investigation carried out by IACS shows that 70% of the total losses had 3 common factors: Ship with age > 18 years Carrying heavy ore cargoes Suffered water flooding of the cargo hold during bad weather Carriers34 Accidents with Bulk Carriers (3) The main factorsthat have contributed for the accidents were: Corrosion Existence of structural cracks in the cargo holds Other factorsthat may have contributed to the structural failure: Occurrence of tensions above the admissible value due to incorrect loading Physical damage of the shell structuresdue to unloading Carriers35 Accident of the MV Derbyshire The MV DERBYSHIRE, British flagged, owned and crewed, disappeared virtually without trace when the vessel was in the Typhoon Orchid, south of Japan, or about 9 September 1980.

10 All on board 42 crew members and two wives were lost. The DERBYSHIRE was a modern (built 1976), fully equipped and well managed ore-bulk-oil (OBO) combination carrier. At over 90,000 gross tons she was, and remains, the largest UK ship ever to have been lost at sea. Source: Carriers36 Bibliography ISO 15401:2000 - Ships and marine technology Bulk Carriers Construction quality of hull structure ISO 15402:2000 - Ships and marine technology Bulk Carriers Repair quality of hull structure. BIMCO/MARTECMA Bulk Carrier Newbuilding Specification Guide19 Annex A. IACS Common Structural Rules for Bulk Carriers38 Typical Midship SectionNotes: Additional thickness in the top of double-bottom plates for cargoes unloaded by mechanical grabs. 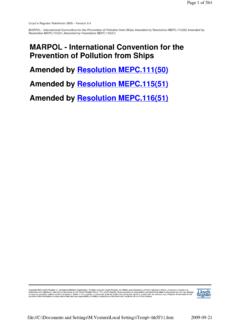 MARPOL - International Convention for the …

Lloyd’s Register Rulefinder 2005 – Version 9.4 MARPOL - International Convention for the Prevention of Pollution from Ships Amended by … 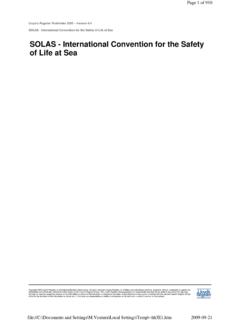 SOLAS - International Convention for the Safety of … 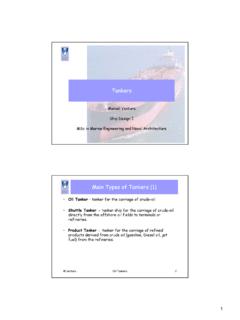 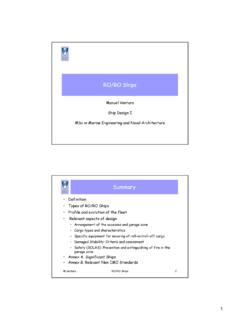 2 M.Ventura RO/RO Ships 3 RO/RO Ships (1) Roll-On/Roll-Off Ships - ships where the cargo is wheeled or is loaded/unloaded on board …