TIVITY TIVITY eyesonbullying.org 23 Bystander Quiz WHICH OF THESE STATEMENTS IS TRUE? 1. Bystanders are usually watching when kids get bullied. True False

2 23. ACTIVITY. Look Around The Bystander Bystander quiz Explanatory Statements Research provides evidence for each statement. 1 True Child bystanders were present in 85% or more of the Bullying incidents in observation studies of children in playgrounds and ,8,9,10. 2 True Between 80% and 90% of bystanders reported that watching Bullying was unpleasant and made them feel uncomfortable. Many children also felt they should step in to help a child who was being ,10,11. 3 True Bystanders stood up for the victim only 25% of the time. Instead, bystanders acted as silent witnesses 54% of the time and joined the Bullying with words or actions 21% of the ,10,11. 4 True Even when bystanders simply watched Bullying without trying to stop it, they made things worse by providing an audience for the bully.

3 Bullying lasted longer when more bystanders were present and when bystanders did nothing to stop 5 True When bystanders laughed at or cheered on Bullying , they encouraged the Bullying to 6 True When bystanders intervened to stand up for the victim, they were successful in stopping the Bullying more than 50% of the time usually within the first 10 7 True Adults are often not aware of Bullying because it usually happens in areas with little or no adult supervision, such as bathrooms, hallways, playgrounds, cafeterias. However, even when adults directly witness Bullying , they often overlook or minimize its harmful effects. In playground observations, adults intervened in only 4% of the Bullying incidents they 8 True When children and adults learn, practice, and use effective ways for bystanders to stop Bullying , incidents of Bullying can be significantly ,12,13,14. 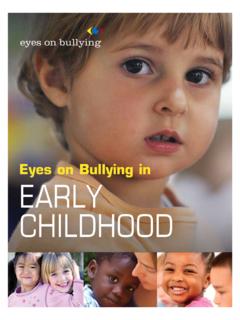 Eyes on Bullying in Early Childhood

in Early Childhood Developed and written by: Kim Storey, EdD and Ron Slaby, PhD. Kim Storey, EdD. is an educator, designer, and producer who creates innovative 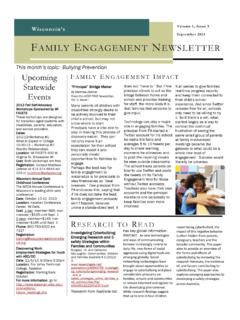 Family Engagement Newsletter Stop Bullying: This website is great for parents and students. It includes information on how to be more than a bystander… need to dominate others. -(Olweus, 1987) -Girls who bully tend to be physically weaker than other girls in their class. -(Roland, 1989) -Bullies have … The Ophelia Project has established a mission to create a socially healthy environment through awareness, education, advocacy, and systems change.