C++ and the Perils of Double-Checked Locking

C++ and the Perils of Double-Checked Locking . Scott Meyers and andrei Alexandrescu September 2004. Multithreading is just one damn thing after, before, or simultaneous with another. 1 Introduction Google the newsgroups or the web for the names of various design patterns, and you're sure to nd that one of the most commonly mentioned is Singleton. Try to put Singleton into practice, however, and you're all but certain to bump into a signi cant limitation: as traditionally implemented (and as we explain below), Singleton isn't thread-safe. Much e ort has been put into addressing this shortcoming. One of the most popular approaches is a design pattern in its own right, the Double-Checked Locking Pattern (DCLP) [13, 14]. DCLP is designed to add e cient thread- safety to initialization of a shared resource (such as a Singleton), but it has a problem: it's not reliable. Furthermore, there's virtually no portable way to make it reliable in C++ (or in C) without substantively modifying the conven- tional pattern implementation.

C++ and the Perils of Double-Checked Locking ∗ Scott Meyers and Andrei Alexandrescu September 2004 Multithreading is just one damn thing after, before, or …

1 C++ and the Perils of Double-Checked Locking . Scott Meyers and andrei Alexandrescu September 2004. Multithreading is just one damn thing after, before, or simultaneous with another. 1 Introduction Google the newsgroups or the web for the names of various design patterns, and you're sure to nd that one of the most commonly mentioned is Singleton. Try to put Singleton into practice, however, and you're all but certain to bump into a signi cant limitation: as traditionally implemented (and as we explain below), Singleton isn't thread-safe. Much e ort has been put into addressing this shortcoming. One of the most popular approaches is a design pattern in its own right, the Double-Checked Locking Pattern (DCLP) [13, 14]. DCLP is designed to add e cient thread- safety to initialization of a shared resource (such as a Singleton), but it has a problem: it's not reliable. Furthermore, there's virtually no portable way to make it reliable in C++ (or in C) without substantively modifying the conven- tional pattern implementation.

2 To make matters even more interesting, DCLP. can fail for di erent reasons on uniprocessor and multiprocessor architectures. This article explains why Singleton isn't thread safe, how DCLP attempts to address that problem, why DCLP may fail on both uni- and multiprocessor ar- chitectures, and why you can't (portably) do anything about it. Along the way, it clari es the relationships among statement ordering in source code, sequence points, compiler and hardware optimizations, and the actual order of statement execution. Finally, it concludes with some suggestions regarding how to add thread-safety to Singleton (and similar constructs) such that the resulting code is both reliable and e cient. 2 The Singleton Pattern and Multithreading The traditional implementation of the Singleton Pattern [7] is based on making a pointer point to a new object the rst time the object is requested: This is a slightly-modified version of an article that appeared in Dr.

3 Dobbs Journal in the July (Part I) and August (Part II), 2004, issues. 1. 1 // from the header file 2 class Singleton {. 3 public: 4 static Singleton* instance();. 5 .. 6 private: 7 static Singleton* pInstance;. 8 };. 9. 10 // from the implementation file 11 Singleton* Singleton::pInstance = 0;. 12. 13 Singleton* Singleton::instance() {. 14 if (pInstance == 0) {. 15 . 16 }. 17 return pInstance;. 18 }. In a single-threaded environment, this generally works ne, though inter- rupts can be problematic. If you are in Singleton::instance, receive an in- terrupt, and invoke Singleton::instance from the handler, you can see how you'd get into trouble. Interrupts aside, however, this implementation works ne in a single-threaded environment. Unfortunately, this implementation is not reliable in a multithreaded en- vironment. Suppose that Thread A enters the instance function, executes through Line 14, and is then suspended.

4 At the point where it is suspended, it has just determined that pInstance is null, , that no Singleton object has yet been created. Thread B now enters instance and executes Line 14. It sees that pInstance is null, so it proceeds to Line 15 and creates a Singleton for pInstance to point to. It then returns pInstance to instance's caller. At some point later, Thread A is allowed to continue running, and the rst thing it does is move to Line 15, where it conjures up another Singleton object and makes pInstance point to it. It should be clear that this violates the meaning of a singleton, as there are now two Singleton objects. Technically, Line 11 is where pInstance is initialized, but for practical pur- poses, it's Line 15 that makes it point where we want it to, so for the remainder of this article, we'll treat Line 15 as the point where pInstance is initialized. Making the classic Singleton implementation thread safe is easy.

5 Just acquire a lock before testing pInstance: Singleton* Singleton::instance() {. Lock lock; // acquire lock (params omitted for simplicity). if (pInstance == 0) {. pInstance = new Singleton;. }. 2. return pInstance;. } // release lock (via Lock destructor). The downside to this solution is that it may be expensive. Each access to the Singleton requires acquisition of a lock, but in reality, we need a lock only when initializing pInstance. That should occur only the rst time instance is called. If instance is called n times during the course of a program run, we need the lock only for the rst call. Why pay for n lock acquisitions when you know that n 1 of them are unnecessary? DCLP is designed to prevent you from having to. 3 The Double-Checked Locking Pattern The crux of DCLP is the observation that most calls to instance will see that pInstance is non-null, hence not even try to initialize it. Therefore, DCLP tests pInstance for nullness before trying to acquire a lock.

6 Only if the test succeeds ( , if pInstance has not yet been initialized) is the lock acquired, and after that the test is performed again to make sure pInstance is still null (hence the name Double-Checked Locking ). The second test is necessary, because, as we just saw, it is possible that another thread happened to initialize pInstance between the time pInstance was rst tested and the time the lock was acquired. Here's the classic DCLP implementation[13, 14]: Singleton* Singleton::instance() {. if (pInstance == 0) { // 1st test Lock lock;. if (pInstance == 0) { // 2nd test pInstance = new Singleton;. }. }. return pInstance;. }. The papers de ning DCLP discuss some implementation issues ( , the importance of volatile-qualifying the singleton pointer and the impact of sep- arate caches on multiprocessor systems, both of which we address below; as well as the need to ensure the atomicity of certain reads and writes, which we do not discuss in this article), but they fail to consider a much more fundamental problem, that of ensuring that the machine instructions executed during DCLP.

7 Are executed in an acceptable order. It is this fundamental problem we focus on here. 4 DCLP and Instruction Ordering Consider again the line that initializes pInstance: pInstance = new Singleton;. 3. This statement causes three things to happen: Step 1: Allocate memory to hold a Singleton object. Step 2: Construct a Singleton object in the allocated memory. Step 3: Make pInstance point to the allocated memory. Of critical importance is the observation that compilers are not constrained to perform these steps in this order! In particular, compilers are sometimes allowed to swap steps 2 and 3. Why they might want to do that is a question we'll address in a moment. For now, let's focus on what happens if they do. Consider the following code, where we've expanded pInstance's initializa- tion line into the three constituent tasks we mentioned above and where we've merged steps 1 (memory allocation) and 3 (pInstance assignment) into a single statement that precedes step 2 (Singleton construction).

8 The idea is not that a human would write this code. Rather, it's that a compiler might generate code equivalent to this in response to the conventional DCLP source code (shown earlier) that a human would write. Singleton* Singleton::instance() {. if (pInstance == 0) {. Lock lock;. if (pInstance == 0) {. pInstance = // Step 3. operator new(sizeof(Singleton)); // Step 1. new (pInstance) Singleton; // Step 2. }. }. return pInstance;. }. In general, this is not a valid translation of the original DCLP source code, because the Singleton constructor called in step 2 might throw an exception, and if an exception is thrown, it's important that pInstance not yet have been modi ed. That's why, in general, compilers cannot move step 3 above step 2. However, there are conditions under which this transformation is legitimate. Perhaps the simplest such condition is when a compiler can prove that the Singleton constructor cannot throw ( , via post-inlining ow analysis), but that is not the only condition.

9 Some constructors that throw can also have their instructions reordered such that this problem arises. Given the above translation, consider the following sequence of events: Thread A enters instance, performs the rst test of pInstance, acquires the lock, and executes the statement made up of steps 1 and 3. It is then suspended. At this point pInstance is non-null, but no Singleton object has yet been constructed in the memory pInstance points to. Thread B enters instance, determines that pInstance is non-null, and returns it to instance's caller. The caller then dereferences the pointer to access the Singleton that, oops, has not yet been constructed. 4. DCLP will work only if steps 1 and 2 are completed before step 3 is per- formed, but there is no way to express this constraint in C or C++. That's the dagger in the heart of DCLP: we need to de ne a constraint on relative instruc- tion ordering, but our languages give us no way to express the constraint.

10 Yes, the C and C++ standards [16, 15] do de ne sequence points, which de ne constraints on the order of evaluation. For example, paragraph 7 of Section of the C++ standard encouragingly states: At certain speci ed points in the execution sequence called sequence points, all side e ects of previous evaluations shall be complete and no side e ects of subsequent evaluations shall have taken place. Furthermore, both standards state that a sequence point occurs at the end of each statement. So it seems that if you're just careful with how you sequence your statements, everything falls into place. Oh, Odysseus, don't let thyself be lured by sirens' voices; for much trouble is waiting for thee and thy mates! Both standards de ne correct program behavior in terms of the observable behavior of an abstract machine. But not everything about this machine is observable. For example, consider this simple function: void Foo() {.} 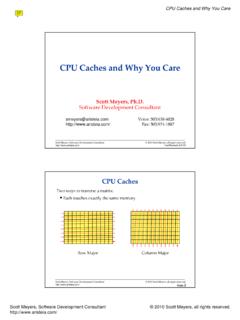 CPU Caches and Why You Care - Scott Meyers

Care, Scott, Cache, Cpu caches and why you care 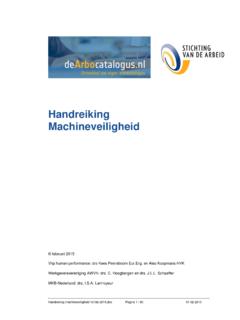 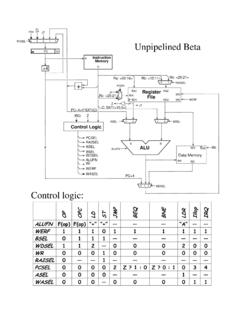 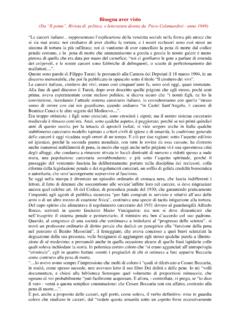