SEISMIC DESIGN GUIDE FOR MASONRY BUILDINGS. CHAPTER 1. Donald Anderson Svetlana Brzev Canadian Concrete Masonry Producers Association April 2009. DISCLAIMER. While the authors have tried to be as accurate as possible, they cannot be held responsible for the designs of others that might be based on the material presented in this document. The material included in this document is intended for the use of design professionals who are competent to evaluate the significance and limitations of its contents and recommendations and able to accept responsibility for its application. The authors, and the Canadian Concrete Masonry Producers Association, disclaim any and all responsibility for the applications of the stated principles and for the accuracy of any of the material included in the document. AUTHORS. Don Anderson, , Svetlana Brzev, , Department of Civil Engineering, Department of Civil Engineering University of British Columbia British Columbia Institute of Technology Vancouver, BC Burnaby, BC.

1 SEISMIC DESIGN GUIDE FOR MASONRY BUILDINGS. CHAPTER 1. Donald Anderson Svetlana Brzev Canadian Concrete Masonry Producers Association April 2009. DISCLAIMER. While the authors have tried to be as accurate as possible, they cannot be held responsible for the designs of others that might be based on the material presented in this document. The material included in this document is intended for the use of design professionals who are competent to evaluate the significance and limitations of its contents and recommendations and able to accept responsibility for its application. The authors, and the Canadian Concrete Masonry Producers Association, disclaim any and all responsibility for the applications of the stated principles and for the accuracy of any of the material included in the document. AUTHORS. Don Anderson, , Svetlana Brzev, , Department of Civil Engineering, Department of Civil Engineering University of British Columbia British Columbia Institute of Technology Vancouver, BC Burnaby, BC.

3 Contents Summary Chapter 1 NBCC 2005 Seismic Provisions Objective: to provide background on seismic response of structures DETAILED. and seismic analysis methods and explain key NBCC 2005 seismic NBCC SEISMIC. provisions of relevance for masonry design PROVISIONS. Chapter 2 Seismic Design of Masonry Walls to CSA Objective: to provide background and commentary for CSA DETAILED. seismic design provisions related to reinforced concrete masonry walls, MASONRY. and discuss the revisions in CSA seismic design DESIGN. requirements with regard to the 1994 edition PROVISIONS. Chapter 3 Summary of Changes in NBCC 2005 and CSA Seismic Design Requirements for Masonry Buildings Objective: to provide a summary of NBCC 2005 and CSA SUMMARY OF. changes with regard to previous editions (NBCC 1995 and CSA NBCC AND. 94) and to present the results of a design case study of a hypothetical low-rise masonry building to illustrate differences in seismic forces and CHANGES.

5 1-10. Seismic Analysis According to NBCC 2005 ..1-19. Seismic Hazard ..1-19. Effect of Site Soil Methods of Analysis ..1-23. Base Shear Calculations- Equivalent Static Analysis Procedure ..1-24. Force Reduction Factors Rd and Ro ..1-27. Higher Mode Effects ( M v factor) ..1-28. Vertical Distribution of Seismic Forces ..1-30. Overturning Moments ( J factor) ..1-31. Torsion ..1-32. Configuration Issues: Irregularities and Deflections and Drift Limits ..1-44. Dynamic Analysis Soil-Structure 4/1/2009 1-1. 1 Seismic Design Provisions of the National Building Code of Canada 2005. Introduction This chapter provides a review of the seismic design provisions in the 2005 National Building Code of Canada (NBCC 2005). Additionally, there is an introduction to the dynamic analysis of structures to assist in understanding the NBCC provisions. Since there are major changes to the seismic provisions reflected in NBCC 2005, some comparisons will be made to the previous edition of the building code, NBCC 1995, and this is covered in more detail in Appendix A.

6 In the past, building structures in many areas of Canada did not have to be designed for earthquakes. However, after the NBCC 2005 was issued and adopted by the Provinces, structures in some additional areas must now be designed for earthquakes, especially if the structure is an important or post-disaster building, or if it is located on a soft soil site. Since many engineers in these regions have not had experience in seismic design and now may have to include such design in their practice, this guideline has been prepared to explain the seismic provisions included in the NBCC 2005 and CSA , and to point out the recent changes in these two documents as they pertain to masonry design. Background Seismic design of masonry structures became an issue following the 1933 Long Beach, California earthquake in which school buildings suffered damage that would have been fatal to students had the earthquake occurred during school hours.

7 At that time, a seismic lateral load equal to the product of a seismic coefficient and the structure weight had to be considered in those areas of California known to be seismically active. Strong motion instruments that could measure the peak ground acceleration or displacement were developed around that time, and in fact, the first strong motion accelerogram was recorded during the 1933 Long Beach earthquake. However, in this era the most widely used strong ground motion acceleration record was measured at El Centro during the 1940 Imperial Valley earthquake in southern California. The 1940 El Centro record became famous and is still used by many researchers studying the effect of earthquakes on structures. With the availability of ground motion acceleration records (also known as acceleration time history records), it was possible to determine the response of simple structures modelled as single degree of freedom systems.

8 After computers became available in the 1960s it was possible to develop more complex models for analyzing the response of larger structures. The advent of computers has also had a huge impact on the ability to predict the ground motion hazard at a site, and in particular, on probabilistic predictions of hazard on which the NBCC. seismic hazard model is based. 4/1/2009 1-2. Design and Performance Objectives For many years, seismic design philosophy has been founded on the understanding that it would be too expensive to design most structures to remain elastic under the forces that the earthquake ground motion creates. Accordingly, most modern building codes allow structures to be designed for forces lower than the elastic forces with the result that such structures may be damaged in an earthquake, but they should not collapse, and the occupants should be able to safely evacuate the building.

9 The past and present NBCC editions follow this philosophy and allow for lateral design forces smaller than the elastic forces, but impose detailing requirements so that the inelastic response remains ductile and a brittle failure is prevented. Research studies have shown that for most structures, the lateral displacements or drifts are about the same irrespective of whether the structure remains elastic or it is allowed to yield and experience inelastic (plastic) deformations. This is known as the equal displacement rule and will be discussed later in this chapter, as it forms the basis for many of the code provisions. The seismic response of a building structure depends on several factors, such as the structural system and its dynamic characteristics, the building materials and design details, but probably the most important is the expected earthquake ground motion at the site.

10 The expected ground motion, termed the seismic hazard, can be estimated using probabilistic methods, or be based on deterministic means if there is an adequate history of large earthquakes on identifiable faults in the immediate vicinity of the site. Canada generally uses a probabilistic method to assess the seismic hazard, and over the years, the probability has been decreasing, from roughly a 40% chance (probability) of being exceeded in 50 years in the 1970s (corresponding to 1/100 per annum probability, also termed the 100. year earthquake), to a 10% in 50 year probability in the 1980s (the 475 year earthquake), to finally a 2% in 50 year probability (the 2475 year earthquake) used for NBCC 2005. The latest change was made so that the risk of building failure in eastern and western Canada would be roughly the same (Adams and Atkinson, 2003), as well as to recognize that an acceptable probability of severe building damage in North America from seismic activity is about 2% in 50. 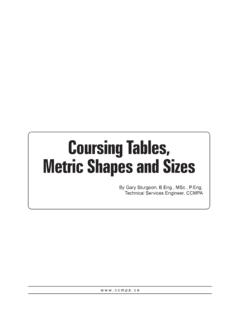 3-2 . c c a . c a. Coursing Tables, Metric Shapes and Sizes. The actual dimensions of width, height and length are 10 mm less than the … 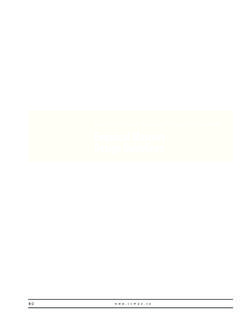 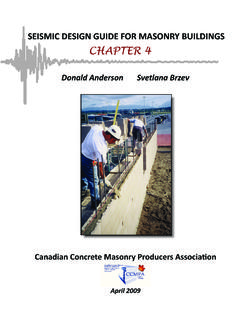 AS 1170.4 Earthquake actions in AustraliaŠWorked …

calculating the base shear and then distributing the lateral force onto the various levels of the structure. The base shear may be understood to …

Base, Shares, Earthquake, Base shear

The application of ABAQUS in seismic analysis of …

4 2010 SIMULIA Customer Conference 2.3 Calculation model S4R element is selected for the shear walls, considering the reinforcement in size and distribution

NGMA Structural Design Manual Chapter 2 - 5 2.4 Loads 2.4.1 General Buildings and other structures shall be designed to resist the load combinations specified in the 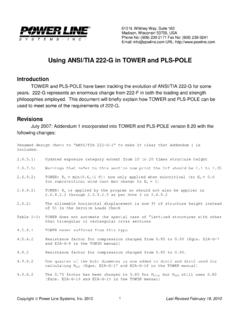 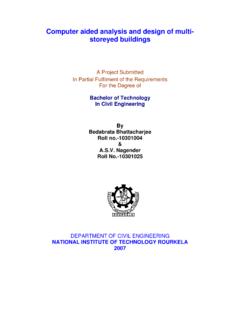 Computer aided analysis and design of multi-storeyed buildings . A Project Submitted . In Partial Fulfilment of the Requirements . For the Degree of 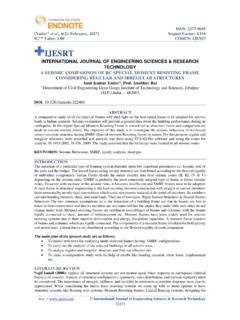