Case laws relating to Employees Provident fund & miscellaneous provisions ACT. SEC 1 Separate balance sheets can't be pressed as proof of functi9onal independence more so when there were common supervisory and management controls. Hotel Mahaveer and other Vs. Regional Provident fund Commissioner 2002 flr (92) (Karnataka High Court). SEC 1 & 7(A) When five partners were drawing wages and the same was shown in Balance sheet in addition to 16 Employees , the establishment was covered under the EPF & MP Act. Tin Printers Pvt. Ltd. Vs Reg Provident fund Comm. West Bengal and others 2001 FLR (88) P. 187 (Calcutta High Court). SECTION 1 (3) AND 7-A- When the PF Authority withdrew the exemption granted to an establishments, the withdrawal orders cannot be challenged after a lapse of more than 4 years. Venkatesh Co. Ltd. V/s Union of India and others (Rajasthan High Court).

1 Case laws relating to Employees Provident fund & miscellaneous provisions ACT. SEC 1 Separate balance sheets can't be pressed as proof of functi9onal independence more so when there were common supervisory and management controls. Hotel Mahaveer and other Vs. Regional Provident fund Commissioner 2002 flr (92) (Karnataka High Court). SEC 1 & 7(A) When five partners were drawing wages and the same was shown in Balance sheet in addition to 16 Employees , the establishment was covered under the EPF & MP Act. Tin Printers Pvt. Ltd. Vs Reg Provident fund Comm. West Bengal and others 2001 FLR (88) P. 187 (Calcutta High Court). SECTION 1 (3) AND 7-A- When the PF Authority withdrew the exemption granted to an establishments, the withdrawal orders cannot be challenged after a lapse of more than 4 years. Venkatesh Co. Ltd. V/s Union of India and others (Rajasthan High Court).

2 SECTION 1(a), 1(b) AND 16 (1) (b)- When a textile unit was purchased to run there a unit manufacturing of stainless steel utensils, it cannot be said to be continuily of business. Some of licences which were used as common for the purpose of factories will not make any effect. Pragati Metal Works Vs. Regional Provident fund Commissioner. 2001-III LLN P. 985 (Bombay High Court). SECTIONS 2(1) (0) AND 2 (1) (d)- A member of the EPF & MP Act is a consumer under the Consumer Protection Act and can invoke the provisions against the Provident fund Commissioner. Regional Provident fund Commissioner Vs. Shiv Kumar Joshi 2000 FLR (84) P. 183 (Supreme Court of India). SECTIONS 2(3), 2(f) AND 7A)- a) Any person employed in connection with the work of an establishment is employee ' under EPF & MP Act. A person having control over the affairs of an establishment is an employer.

3 It is immaterial whether he has control or supervision over the functioning of the Employees . Gujarat Civil Supplies Corporation Ltd. Vs. Regional PF Commissioner and Others 1999 FLR(83) P. 875 (Gujarat High Court). Trainees are not Employees under the EPF & MP Act, so contribution is not payable in respect of them. Sri Ram Vilas Service Ltd. Vs. Reg Provident fund Commr. 2000 FLR (86) P. 325 (Madras High Court). SECTION 2A Two schools run by the same Management catering to nursery classes and the other to secondary classes, constitute one single establishment under the EPF & MP Act. Noor Niwas Nursery Public School Vs. Reg Provident fund Comm and others 2001 FLR (88) P. 533 (Supreme Court of India). SECTION 2 (b) Section 529(A)(i) of Companies Act would prevail over Section 11 of the EPF & MP Act. Thus PF dues can be considered only in pari passu alongwith claim of secured creditors under Section 529-A.

4 Joseph Vs Official Liquidator 2001 llr p. 1143 (Kerala High Court). SECTIONS 2(e), 8B and 14A - When the names of directors have not been furnished to the PF authorities as per the EPF & MP Act. It is open to proceed with any one of the directors. Premchand Jute Mills Ltd. and other Vs. Regl. PF Commr. 2002 FLR(93) (Calcutta High Court). SECTIONS 2(e), 2A & 8F (3) (x) A subsidiary company will not be a branch or department of a holding Company, thus it is not liable for default of subsidiary Company for PF dues. Indl. Development Corpn. And another Vs. Reg PF Commr. II and another 2002 LLR P. 275 (Orissa High Court). PF Contribution is required to be deposited along with interest thereon when an employee has been reinstated with back wages. Surendra Mishra Vs. State Bank of India and others 1999-II LLN P. 554 (Patna High Court).

5 SECTIONS 2(f) (ii)- the Employees who have been appointed as learners' cannot be said other than apprentices in view of the Standing Orders so they are apprentices under the Apprentices Act and not covered by the EPF & MP Act. TV Sundaram Iyengar & Sons Ltd., Trichy Vs Reg Prov fund Commr, Trichy 1999-III LLN P. 285 (Madras High Court). There are prohibiting provisions to appropriate or adjust any amount against the am PF. Payable to an employee . Punjab & Sindh Bank Vs Ashok K. Aggarwal and others. 1999-IV LLN P. 261 (Delhi High Court). SECTIONS 2(f), 6 and 7A An employee drawing wages above Rs. 5000/- is an excluded employee under the EPF & MP Act. The question of there being any compulsion under law to pay contribution of 12% over and above the monthly salary of Rs. 5000/- cannot arise. Contribution of 12% upto salary of Rs.

6 5000/- and 10% above Rs. 5000/- as paid by the employer, was perfectly in accordance with law. Motor Industries Co Ltd. Vs Reg Provident fund Commissioner and other 2000 LLR P. 1309 (Karnataka High Court). When trainees are recruited as per Standing Orders and imparted training as per the scheme framed by the employer, they are not Employees ' as per the EPF & MP Act. Sri Rama Vilas Service Ltd Vs Reg PF Commissioner 2000-I LLN P. 834 (Madras High Court). SECTIONS 2(g)(1),(61) AND 70 An employer is under a legal obligation to pay the PF. amount to nominee nominated as per Para 61 of EPF Scheme. He cannot give the amount on the strength of succession certificate produced by other member of family. However, the nominee cannot claim absolute right to that amount excluding the right of heirs. So both have equal right to share.

7 Pushpa, widow of Virendra Kumar Yadav Vs Jiyabai, widow of Babulal Yadav 1998-IV LLN P. 361 (Madhya Pradesh High Court). SECTIONS 7(A)- When both the units have common partners, common retire of business unit of finance & management and union of international integrity it is considered as one establishment. Kaka's Restaurant Vs Sehgal, RPFC, Delhi 2003-III-LLN-P. 582 (Delhi High Court). SECTIONS 7-A & When the Management has paid the entire PF dues, the Magistrate before whom the complaints for non-payment was pending, has to consider the same to dispose off the criminal proceedings. Jasoda Glass and Silicate and others Vs Regional PF Commr and others 2002-III LLJ P. 1047 (Calcutta High Court). SECTIONS 7A AND 16 When two units had two different lines of business and one was not dependent on the other and could exist even if the other closed down and admittedly they had separate tax registration, income-tax registration and registration under the Labour laws , they should be treated as two separate entity under the EPF & MP Act.

8 PBM Polytex Ltd., Boregaon, Madhya Pradesh Vs Regional Provident fund Commissioner, Jabalpur 1999-I LLN P. 610 (EPF Appellate Tribunal, New Delhi). Sections 7-A and 71 Partners receiving remuneration are not Employees as per EPF & MP. Act.. Om Roller Flour Mills Vs Union of India 2002 FLR (94) P. 908 (Calcutta High Court). SECTIONS 8B- An employer cannot take shelter of Section 22 of SIC Act for non submission of PF contributions. Universal Paper Mills and other Vs Reg Provident fund Commr and Others 2002-LLR P. 41 (Calcutta high Court). The units cannot be clubbed together based on common ownership unless there is financial or functional integrity. Regl. PF Commissioner, Mangalore Vs B. Ganapathy Bhandarkar 2003-FLR (98) P. 987 (Karnataka High Court). SECTIONS 11 (2) - Dues under EPF & MP Act would always remain first charge and shall be paid first our of assets of establishment as per Section 11(2) EPF & MP Act.

9 Recovery Officer, Asstt PF Commr Vs Kerala Financial Corpn. 2002 FLR(95) P. 1024 (Kerala High Court). SECTIONS 14 (1-A) & 38-Non payment of PF dues is a continuing offence so complaint cannot be rejected on the plea that it is time barred. Shivarama K M Vs KC Purushothama 1999-II (Karnataka High Court. The payments towards PF Contributions is required to be made before the close of 15th of every month. If the employer fails to remit the same, it would attract damages u/s 14-B, EPF &. MP Act. The failure of EPF Authority in initiating the proceedings within a year will not render the order of liability non-est in law. However, delay in initiating the proceedings from 4-1/2. years to 8 years cannot be said reasonable. Presidency Kid Leather (P) Ltd. Vs Regional Provident fund commissioner 1998 FLR (78) P. 342 (Madras High Court).)

10 SECTION !4 B Delayed payment of PF contribution will attract damages as well as interest even though there is sufficient reason for delay in making payment. Gen Man. Emakulam Distt. Co-Op. Bank Ltd. Vs Reg Provident fund Comm and another 2000 FLR (86) P. 984 (Kerala High Court). SECTIONS 16 (1) & 2A A new factory established by a company cannot be its Branch as per Sec 2-A EPF & MP Act merely on the ground that Board of Directors are the same. Supervisory, financial and managerial control are the relevant factors. Regional Provident fund Commissioner and another Vs. Dharamsl. Morarji Chemical Co. Ltd. 1998-III LLN P. 932 (Supreme Court of India). SECTIONS 17 The employer is required to satisfy the PF Authorities that the Trust is recognized by the IT Deptt and benefits are more beneficial, in order to get the exemption in 17. 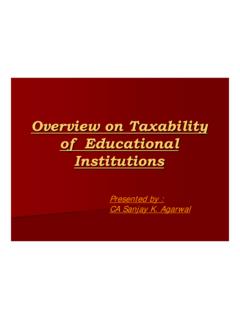 Overview on Taxability of Educational Institutions

SAMPLE DEED of Trust for Charitable Purposes “THIS INDENTURE made at Delhi this _____ day of _____ between Shri Ravinder Kumar Gupta hereinafter called “THE SETTLER” (which expression shall, unless it be repugnant to the context or meaning thereof, include his heirs, executors and administrators) of the One part and

National Commission for Religious and Linguistic …

Annexures to the Report of the National Commission for Religious and Linguistic Minorities ii Designed and Layout by New Concept Information Systems Pvt. Ltd., Tel.: … 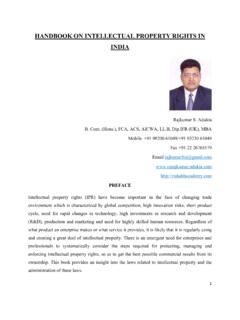 LAND USE AND Notes AGRICULTURE

MODULE - 8 Notes Land use and Agriculture Economic activities and infrastructural development in India 126 GEOGRAPHY 22.1 GENERAL LAND USE Land is the most vital resource of a country.

The Culture and Civilisation of Ancient India in ...

The Culture and Civilisation of Ancient India in Historical Outline D. D. Kosambi Preface 1. THE HISTORICAL PERSPECTIVE 1.1. The Indian Scene 1.2.

Ownership in Orissa, In Orissa, Ownership, Commission for Religious and Linguistic, Commission for Religious and Linguistic Minorities, ROAD USER TAXES IN INDIA, HANDBOOK ON INTELLECTUAL PROPERTY, HANDBOOK ON INTELLECTUAL PROPERTY RIGHTS IN INDIA, PROJECT PROPOSAL FOR COMMUNITY RADIO, LAND USE AND, AGRICULTURE, Land use and Agriculture, Culture and Civilisation of Ancient India, Lecture Notes