Challenges and Problems Faced By Women …

2 In some cases Women can find employment as nurses, doctors, teachers the caring and nurturing sectors. But even if well qualified Women engineers or managers or geologists are available, preference will be given to a male of equal qualification. The present study investigated to identify the factors preventing Women employees from aspiring for higher post and Challenges & Problems Faced by Women workers. Further the study try to explain the real condition of Indian working Women and also make an effort to clear main Problems of working Women . Keywords: Challenges , Problems , traditional, Women workers INTRODUCTION.

3 In the history of human development, Women have been as vital in the history making as men have been. In fact higher status for Women vis- -vis employment and work performed by them in a society is a significant indicator of a nation's overall progress. There are many reasons and Problems that forced Indian's Women to work. The financial demands on the Indian families are increasing day by day. Cost of living, expenses on education of children, and cost of housing properties in India raised and these reason force every family in India to look for ways and means of increasing the household income.

4 As a result, Women in India who were mostly known as homemakers are forced to go for jobs and take up even careers that were considered only suitable for men such as working in night shifts. Working Women , those who are in paid employment, face Problems at the workplace just by virtue of their being Women . Social attitude to the role of Women lags much behind the law. The attitude which considers Women fit for certain jobs and not others, causes prejudice in those who recruit employees. Thus Women find employment easily as nurses, doctors, teachers, secretaries or on the assembly line.

5 Even when well qualified Women are available, preference is given to a male candidate of equal qualifications. A gender bias creates an obstacle at the recruitment stage itself. When it comes to remuneration, though the law proclaims equality, it is not always practiced. The inbuilt conviction that Women are incapable of handling arduous jobs and are less efficient than men influences the payment of unequal salaries and wages for the same job. But in most families her salary is handed over to the father, husband or in-laws. So the basic motive for seeking employment in order to gain economic independence is nullified in many Women 's case.

6 Problems of gender bias beset Women in the industrial sector when technological advancement results in retrenchment of employees. Women workers in India are Faced with lot more Challenges than their counterparts in the other countries. Besides of so many efforts from past years, female section of society is deprived in compared to male section. They are not given first priority in social and economic decisions in her own family. According to United Nations Development Programmer (UNDP) report, Women are ISSN : 2230-9667 Chronicle of the Neville Wadia Institute of Management Studies & Research 76.

7 Human Resource Management involved in doing 67% work of world; still they are socially and economically deprived. They are receiving only 10% of the universal income and have 1% part in global assets. This discrimination also persists in their work place in unorganized sector. In informal sector, Women workers don't get same wages for same nature of work for same hours done by men. They are exploited at workplace. They are some acts The Unorganized Workers Social Security Act, 2008, Domestic Workers Welfare and Social Security Act, 2010 etc. but due to their improper implementation, Women workers are forced to work and live in miserable conditions in unorganized sector.

8 In India mostly it is Women who have to do household as cook, clean the house, do the dishes, wash clothes, care of children and men do not share on most of the household works. Men do that work that is to be dealt outside the house. Now a day there is increasing need for getting some income for the family then Women have to work harder. Women workers have to handle Persecution's at their work place, sometimes just over look things to ensure that their job is not jeopardized in anyway. Many Indian families are still living as joint families along with the parents and in-laws.

9 This adds to their stress further because they have to please all the family members of her husband. Listen to their complaints that they make against her and turn deaf ears towards them and so on. Overall, majority of Women in India look towards or live in the hope that things will change. Employment Trends for Women in India The increase in the number of Women in the labor market signifies an important trend regarding Women 's employment. This has been occurring alongside increases in labor force and workforce, especially for urban Women , although rural Women workers predominate in terms of participation rates and overall magnitude.

10 The increasing share of Women 's participation in the labor force and its significant contribution to household income as well as GDP require some policy attention be paid to the gender dimensions of employment. The eleventh Five Year Plan document for the first time in the history of Indian planning recognizes Women not only as equal citizens but as 'agents of sustained socio-economic growth and change' (GOI, 2008, p. 5). A multi-pronged approach is emphasized to address issues concerning Women workers, such as provision of basic entitlements and strengthening of institutional mechanisms. 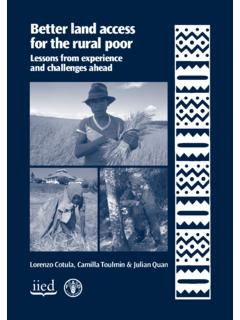 Better land access for the rural poor Lessons from experience and challenges ahead This paper was prepared under contract with the Food and Agriculture Organization of the United Nations (FAO).

STATE OF THE WORLD’S FORESTS - Food and … 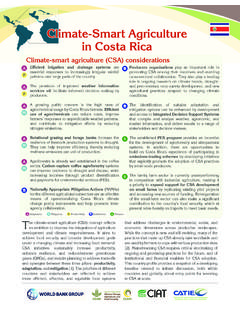 Sustainable Management of Water Resources in …