Water Quality Monitoring - A Practical Guide to the Design and Implementation of freshwater Quality Studies and Monitoring Programmes Edited by Jamie Bartram and Richard Ballance Published on behalf of United Nations Environment Programme and the World Health Organization 1996 UNEP/WHO. ISBN 0 419 22320 7 (Hbk) 0 419 21730 4 (Pbk). Chapter 13 - SEDIMENT MEASUREMENTS . This Chapter was prepared by E. Ongley. Sediments play an important role in elemental cycling in the aquatic environment. As noted in Chapter 2 they are responsible for transporting a significant proportion of many nutrients and contaminants. They also mediate their uptake, storage, release and transfer between environmental compartments.

1 Water Quality Monitoring - A Practical Guide to the Design and Implementation of freshwater Quality Studies and Monitoring Programmes Edited by Jamie Bartram and Richard Ballance Published on behalf of United Nations Environment Programme and the World Health Organization 1996 UNEP/WHO. ISBN 0 419 22320 7 (Hbk) 0 419 21730 4 (Pbk). Chapter 13 - SEDIMENT MEASUREMENTS . This Chapter was prepared by E. Ongley. Sediments play an important role in elemental cycling in the aquatic environment. As noted in Chapter 2 they are responsible for transporting a significant proportion of many nutrients and contaminants. They also mediate their uptake, storage, release and transfer between environmental compartments.

2 Most SEDIMENT in surface waters derives from surface erosion and comprises a mineral component, arising from the erosion of bedrock, and an organic component arising during soil-forming processes (including biological and microbiological production and decomposition). An additional organic component may be added by biological activity within the water body. For the purposes of aquatic monitoring, SEDIMENT can be classified as deposited or suspended. Deposited SEDIMENT is that found on the bed of a river or lake. Suspended SEDIMENT is that found in the water column where it is being transported by water movements. Suspended SEDIMENT is also referred to as suspended matter, particulate matter or suspended solids.

3 Generally, the term suspended solids refers to mineral + organic solids, whereas suspended SEDIMENT should be restricted to the mineral fraction of the suspended solids load. SEDIMENT transport in rivers is associated with a wide variety of environmental and engineering issues which are outlined in Table The study of river suspended sediments is becoming more important, nationally and internationally, as the need to assess fluxes of nutrients and contaminants to lakes and oceans, or across international boundaries, increases. One of the most serious environmental problems is erosion and the consequent loss of topsoil. Although erosion is a natural phenomenon, the rate of soil loss is greatly increased by poor agricultural practices which result, in turn, in increased suspended SEDIMENT loads in freshwaters.

4 Loss of topsoil results in an economic loss to farmers, equivalent to hundreds of millions of US dollars annually, through a reduction in soil productivity. Good environmental practice in agriculture, which may include contour ploughing and terracing, helps to protect against soil loss and against contamination of surface waters. Table Issues associated with SEDIMENT transport in rivers SEDIMENT Environmental issues Associated engineering issues size Silts and Erosion, especially loss of topsoil in agricultural clays areas; gullying High SEDIMENT loads to reservoirs Reservoir siltation Chemical transport of nutrients, metals, and Drinking-water supply chlorinated organic compounds Accumulation of contaminants in organisms at the bottom of the food chain (particulate feeders).

5 Silting of fish spawning beds and disturbance of habitats (by erosion or siltation) for benthic organisms Sand River bed and bank erosion River channel deposition: navigation problems Instability of river cross-sections River bed and bank erosion Sedimentation in reservoirs Habitat disturbance Gravel Channel instability when dredged for aggregate Instability of river channel leads to problems of navigation and flood- control Habitat disturbance Water users downstream of areas of heavy soil run-off may have to remove suspended SEDIMENT from their water supplies or may suffer a reduction in the quantity of water available because of reservoir siltation. The rapid reduction in the storage capacity of reservoirs due to siltation is a major SEDIMENT - related problem world-wide.

6 Moreover, the availability of water for irrigation from the reservoir leads to more intensive land use and increased soil erosion. These effects may also be exacerbated by desertification (impoverishment of vegetative cover and loss of soil structure and fertility), whether anthropogenic or climatic in origin. In addition, gradual enrichment of reservoir waters with nutrients (some of which also arise from agricultural practices) leads to enhanced production and increased sedimentation of organic material originating from the water column (from decaying plankton) or littoral zones (from decaying macrophytes). Consequently, the rate of reservoir siltation often greatly exceeds that predicted during design.

7 Monitoring data for SEDIMENT transport to, and productivity within, reservoirs are therefore required for accurate calculations of SEDIMENT transport and deposition and for the management of major reservoirs. Further information on monitoring and assessment approaches for reservoirs is given in the companion guidebook Water Quality Assessments. In order to protect surface water resources and optimise their use, soil loss must be controlled and minimised. This requires changes in land use and land management, which may also have an impact on water quality. Control of the siltation rate in reservoirs requires that adequate data are available at the design stage.

8 This, in turn, demands an understanding of SEDIMENT transport and appropriate methods for measuring SEDIMENT load and movement. Recognition of the importance of sediments and their use in monitoring and assessment programmes is increasing and methods are constantly being refined. For the purposes of water quality monitoring a distinction can be made between measuring SEDIMENT quantity and SEDIMENT quality. Some of the techniques available for studying SEDIMENT quality (as a component of water quality studies) are not yet widely accepted or used and have not been standardised. Although they may be suitable for special surveys, some methods are too complex and costly for routine monitoring programmes.

9 A full discussion of the role of sediments and particulate material in water quality monitoring and assessment is available in the companion guidebook Water Quality Assessments. This present Chapter concentrates on some of the fundamental procedures required for the more common SEDIMENT MEASUREMENTS necessary for water quality monitoring programmes. Types of SEDIMENT transport SEDIMENT transport is a direct function of water movement. During transport in a water body, SEDIMENT particles become separated into three categories: suspended material which includes silt + clay + sand; the coarser, relatively inactive bedload and the saltation load. Suspended load comprises sand + silt + clay-sized particles that are held in suspension because of the turbulence of the water.

10 The suspended load is further divided into the wash load which is generally considered to be the silt + clay-sized material (< 62 m in particle diameter) and is often referred to as fine-grained SEDIMENT . The wash load is mainly controlled by the supply of this material (usually by means of erosion) to the river. The amount of sand (>62 m in particle size) in the suspended load is directly proportional to the turbulence and mainly originates from erosion of the bed and banks of the river. In many rivers, suspended SEDIMENT ( the mineral fraction) forms most of the transported load. Bedload is stony material, such as gravel and cobbles, that moves by rolling along the bed of a river because it is too heavy to be lifted into suspension by the current of the river.

abstract THE ORIGINAL MANUALon freshwater prawn farming was published in English, French and Spanish by FAO and translated by others into Farsi, Hindi, and Vietnamese. In the 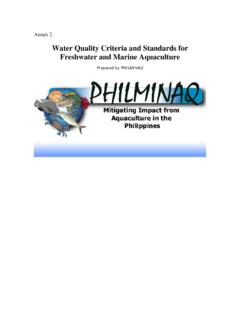 Water Quality Criteria and Standards for …