Online Chemistry HMDScience.com (c) ©Zee/Alamy (br) ©Corbis Online labs include: Is It an Acid or a Base? Effects of Acid Rain on Plants Acids an Bases CHAPTER 14 Why it Matters Video HMDScience.com

2 Foods you thought of, like those in Figure , owe their sour taste to an acid . Sour milk contains lactic acid . Vinegar, which can be produced by fermenting juices, contains acetic acid . Phosphoric acid gives a tart flavor to many carbonated > Virginia standards beverages. Most fruits contain some kind of acid . Lemons, oranges, grapefruits, The student will investigate and and other citrus fruits contain citric acid . Apples contain malic acid , and grape juice understand that experiments in which variables contains tartaric acid . are measured, analyzed, and evaluated Many substances known as Bases are commonly found in household products, produce observations and verifiable data.

3 Key concepts include: such as those in Figure Household ammonia is an ammonia-water solution designated laboratory techniques. that is useful for all types of general cleaning. Sodium hydroxide, Na OH, known by safe use of chemicals and equipment. the common name lye, is present in some commercial cleaners. Milk of magnesia The student will investigate and is a suspension in water of magnesium hydroxide, Mg(OH)2, which is not very understand that chemical quantities are based on molar relationships. Key concepts include: water-soluble. It is used as an antacid to relieve discomfort caused by excess acid / base theory; strong electrolytes, weak hydrochloric acid in the stomach.

5 Such as aluminum hydroxide. Acids and Bases 441. Figure Main Idea acid Indicator A strip of pH Acids are identified by their properties. paper dipped into vinegar turns red, Acids were first recognized as a distinct class of compounds because of showing that vinegar is an acid . the common properties of their aqueous solutions. These properties are listed below. 1. A. queous solutions of Acids have a sour taste. Taste, however, should NEVER be used as a test to evaluate any chemical substance. Many Acids , especially in concentrated solutions, are corrosive; that is, they destroy body tissue and clothing. Many are also poisons. 2. A. cids change the color of acid - base indicators.

6 When pH paper is used as an indicator, the paper turns certain colors in acidic solu- tion. This reaction is demonstrated in Figure 3. S. ome Acids react with active metals and release hydrogen gas, H2. Recall that metals can be ordered in terms of an activity series. Metals above hydrogen in the series undergo single-displacement reactions with certain Acids . Hydrogen gas is formed as a product, as shown by the reaction of barium with sulfuric acid . Ba(s) + H2SO4(aq) BaSO4(s) + H2(g). 4. A. cids react with Bases to produce salts and water. When chemically equivalent amounts of Acids and Bases react, the three properties just described disappear because the acid is neutralized.

8 In pure form, each compound listed in the table is a gas. Aqueous solu- Figure tions of these compounds are known by the acid names. Specific rules for naming binary compounds are listed below. Oxyacid Structure Although the chemical formula shows hydrogen Binary acid Nomenclature atoms and a polyatomic ion, notice that the hydrogens are bonded to the 1. The name of a binary acid begins with the prefix hydro-. oxygen in an oxyacid. 2. The root of the name of the second element follows this prefix. H.. 3. The name then ends with the suffix -ic. O.. : .. : .. H : O.. : P.. : O.. : H. An oxyacid is an acid that is a compound of hydrogen, oxygen, and a third : O.

9 : . element, usually a nonmetal. Nitric acid , HNO3, is an oxyacid. The structures of two other oxyacids are shown in Figure Oxyacids are one class of ternary Acids , which are Acids that contain three different elements. Usually, the elements in an oxyacid formula are written as one or more hydrogen atoms followed by a polyatomic anion. But as you can see from the structures, the H atoms are bonded to O atoms. The names of oxyacids (a) Structure of H3PO4. follow a pattern, and the names of their anions are based on the names of .. the Acids . Some common oxyacids and their anions are given in : O.. : .. Figure Many of these names should be familiar to you. 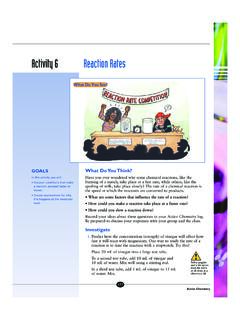 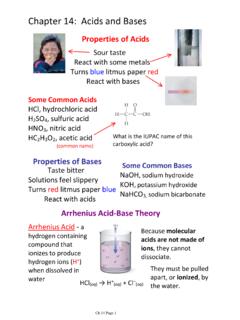 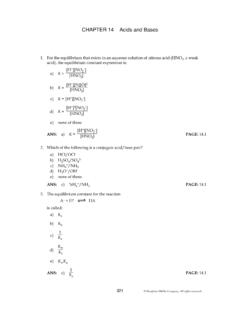 CHAPTER 14 Acids and Bases 321 © Houghton Mifflin Company.All rights reserved. 1. For the equilibrium that exists in an aqueous solution of nitrous acid (HNO2, a ... 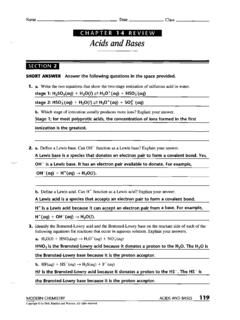 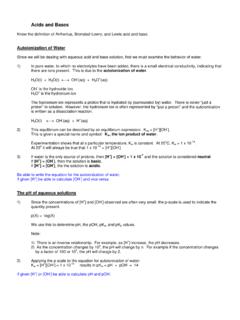 Acids and Bases Know the definition of Arrhenius, Bronsted-Lowry, and Lewis acid and base. Autoionization of Water Since we will be dealing with aqueous acid and base solution, first we must examine the behavior of water. 1) In pure water, to which no electrolytes have been added, there is a small electrical conductivity, indicating that 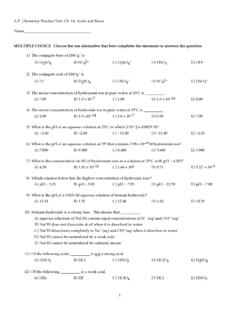 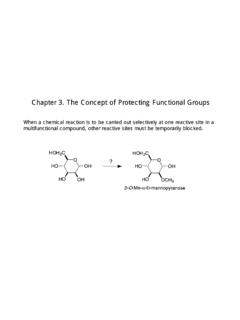 Chapter 3. The Concept of Protecting Functional Groups When a chemical reaction is to be carried out selectively at onereactive site in a multifunctional compound, other reactive sites …