+. Chapter 19: Michigan Oil & Gas Title By: Jeffrey A Smetzer, CPL. Presented by: Luanne Johnson, CDOA . +. Spacing Order 40-Acre spacing for all wells in Michigan . They do allow numerous exceptions to this rule For these exceptions you check the Department of Environmental Quality Website. ( ). They can be found by the township & formations. You should get all of the orders covering your area There are numerous spacing orders for various formations (and depths). +. Spacing Order Antrim Shale was originally spaced at one well per 40. acres. But then they started to make changes. 1983 - T30N R3W one well per 160 acres 1994 Antrim one well per 80 acres. Also set up the Uniform Spacing Pattern (USP). This allowed pooling of 100s of acres into a single production unit Permitted drilling of one well per 80 acres No closer than 1320' or closer than 330' to the boundary of USP.

1 +. Chapter 19: Michigan Oil & Gas Title By: Jeffrey A Smetzer, CPL. Presented by: Luanne Johnson, CDOA . +. Spacing Order 40-Acre spacing for all wells in Michigan . They do allow numerous exceptions to this rule For these exceptions you check the Department of Environmental Quality Website. ( ). They can be found by the township & formations. You should get all of the orders covering your area There are numerous spacing orders for various formations (and depths). +. Spacing Order Antrim Shale was originally spaced at one well per 40. acres. But then they started to make changes. 1983 - T30N R3W one well per 160 acres 1994 Antrim one well per 80 acres. Also set up the Uniform Spacing Pattern (USP). This allowed pooling of 100s of acres into a single production unit Permitted drilling of one well per 80 acres No closer than 1320' or closer than 330' to the boundary of USP.

2 +. State Leases Performance Bond the lessee needs this based on the number of acres under the lease. Minimum amount $2, (subject to change). Certificate of Deposit done in the name of the State of Michigan Allows the company the option of being paid the interest. D/O Analyst lets the state know the interest should be paid to the company Bank with the CD pays the state State pays the lessee +. State Leases Form Assignment required Fee charged for approval of state assignments The change these forms frequently so make sure you always check to make sure you have the most current version Assignee has the obligation for performance under the lease. Need a lease bond for approval of assignment +. Pooling & Unitization State Lease form is found online. ( ). It allows operator to pool into a spaced unit but not larger Operator must ratify or sign the pooling agreement if the production unit is larger than a spaced unit.

3 The state lease form has been changed many times so make sure you read each of them. If you are unclear with any provisions you should contact the state for them to clarify. They are very particular as to how they should be interpreted. They also require certain language in any pooling or unitization agreement they are involved in. +. Pooling & Unitization Private Leases Leases are pooled not lands Leases describe the lands Pooling or unitization agreement describes the area being pooled Unitization agreement maps show lands that parties with interest are bound, by agreement, to share investment cost &. revenues within the defined boundary. Units can be created by convention or by order of the State's Supervisor of Wells. Compulsory pooled unit unit formed by order +. Shut in wells Oil wells older private leases almost never have shut in provision.

4 No shut in payment can be made to extend lease. Gas wells can shut in and make payments to extend lease. You should always go and check the lease form to see what the state classified it as. (oil well, gas well, or gas well that produces oil). Must be confirmed by: Michigan Public Service Commission (MPSC). Michigan Department of Environmental Quality. +. Shut in wells If classified as an oil well remember most old lease forms don't allow for shut in. But usually allows for 60 to 120 days of rework or redrill but then needs to be put back in production. Force Majeure can be used a short term possibitlity Check with your legal department for options to avoid losing the lease and maybe well. +. Compulsory Pooling Unleased interest within the spaced unit is subject to compulsory pooling Done upon request to MDEQ. Wells can't be drilled on unleased interest even if the request for compulsory pooling is approved State has specific provisions You should have a Michigan Title attorney review +.

5 Compulsory Pooling Division Order Analyst documents the attempts to lease. Always be nice to land owner as they attend hearing and can complain. Must file an affidavit regarding contacts with the holdout party when requesting a hearing. Affidavit of enumerating the parties are notified of the hearing +. Compulsory Pooling Final Order Takes 6 to 12 months to receive 30-day time period runs for party being pooled to respond to the election Choices Join the unit by signing a lease Do nothing and be considered pooled If they don't want to join the unit the state gives them 1/8. royalty (to be paid immediately with other owners). Operator gets a contribution for costs for drilling, completion, and operational cost until recovers cost. +. Division Orders & Revenue State of Michigan will NOT sign division orders You can send a division order to them for their records If they agree with your calculations you will receive a letter.

6 If you would rather you can send a letter including Well name Unit description Owner number Calculation Interest +. Michigan Dormant Mineral Act Passed in 1963. Parties would reserve oil, gas & mineral rights but couldn't be found Which caused producers issues since they couldn't drill if they couldn't lease the entire interest within the production unit. Only covers oil and gas Not hard minerals (coal, sand & gravel). +. Michigan Dormant Mineral Act Provision No activity on a severed mineral tract in a 20-year period Oil & Gas went dormant Reverts to the surface owner. Ways the owner can have the time start over Recorded: Leasing the property Competing a sale Mortgage or transfer of interest of record Reserving or claiming the interest Unrecorded: Drilling permit Withdrawing oil & gas Storing gas underground +. Michigan Dormant Mineral Act Claim of Interest Describe land Act was amended 2006 & 2007.

7 New provisions on severed interest Can toll his or her interest every 20 years Prevents tax foreclosure Claim of Interest required every 20 years Even if there is an active tract and is held by production and receiving royalty payments. +. Tax Foreclosures on Severed Minerals If owner fails to pay real estate taxes and state forecloses on them. State takes oil, gas and mineral rights Extinguishes the existing oil & gas lease (even if it is being paid royalties). State demands lessee/operator to buy a lease from them (usually at a higher royalty rate). State gets paid +. Tax Foreclosures on Severed Minerals State felt the owner should be responsible and pay tax payments. Severed mineral owners should have seen the notice in the newspaper (this can be an issue when they could live in another state). They could have paid the surface owners taxes for them.

8 +. Tax Foreclosures on Severed Minerals Comben v. State . Brought by Antrim County Treasurer Sherrie Comben Circuit ruled . State had stolen the oil, gas & mineral interests through this bogus notice concept and had to give those rights back along with any royalty they were paid Supreme Court vacated (reversed)the decision for technical reasons Blackstone v State . Class-action Sought damages for theft of private property without the opportunity for a hearing. Settled State now: For any tax foreclosures that took place after 1976. They would reassign the oil, gas and minerals to the severed owner Few caveats Making sure the minerals weren't domant Before 1976. Won't hear anything on this because of statute of limitations +. Tax Foreclosures on Severed Minerals State changed the Dormant Mineral Act to try to protect them Attorneys . Unclear if filing a notice ever 20 years protects losing the lease because of tax foreclose sale Need to look at Title when leases are bough at state lease sale Title needs to clarify whether the leased tract was pre or post 1976 foreclosure property or a fee purchase Fee state will issue the lease Questioned lease might not be issued.

10 Married Men Need to have their wives execute a sale or transfer because the wife has a dower interest Unless she is a voluntary non-resident of the state Is marital status must be indicated If lessee He can sell without wife because looked as personal and not real property. But wife should sign D/O, deed or royalty conveyance to release potential downer interest. +. Titles Title can be held as: Joint Tenants full right of survivorship Tenants by entireties like Joint Tenants used for married couples Tenants in common assumed automatically if it is not indicated Parties have an undivided interest If one dies it goes to their heirs +. Post-production costs State lease forms: Always review as the change Private lease forms: Will include a definition of post-production cost. Statutorily required Ensures the lessor understands post-production cost deductions from royalty check Cost Used for natural gas Gas not purchased at wellhead Have to calculate or deduct transportation and treating rates between well head and point of sale. 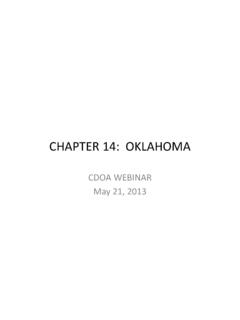 CHAPTER 14: OKLAHOMA CDOA WEBINAR May 21, 2013. ... Sarah Evans shows “John Randolph and Jane Randolph, husband and wife.” Sarah should have an affidavit recorded stating that Jane Mosley ... – Any defect in the execution, acknowledgment, recording or certificate of recording the same ... 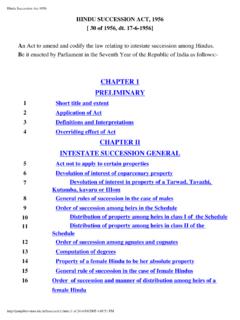 Hindu Succession Act 1956 HINDU SUCCESSION ACT, 1956 [ 30 of 1956, dt. 17-6-1956] An Act to amend and codify the law relating to intestate succession among Hindus. Be it enacted by Parliament in the Seventh Year of the Republic of India as follows:- CHAPTER 1 PRELIMINARY 1 Short title and extent 2 Application of Act

Intestate Succession Chapter 18 - 3 [February 2011] [Issue 21] In a polygamous customary union, if the deceased is survived by wives but not survived by any descendant, the estate is divided equally between the wives. 4 2.2 Descendant(s) as sole heir(s)

REPORT ON THE CUSTOMARY LAW OF SUCCESSION 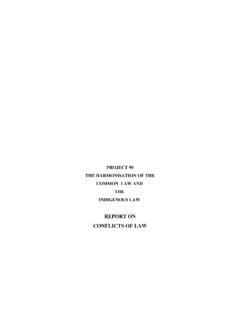 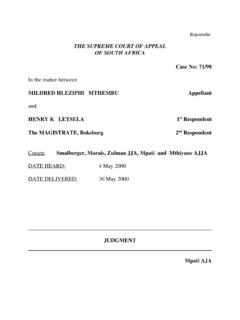