24 County. Somehow he had accumulated 350 acres, while we have found a purchase for only 135 acres. By 1780, Francis II had removed to Wake County, North Carolina.

3 The assumed son of Francis I, whom we will call Francis II, was probably born about 1735 in Virginia, moved to Halifax county , North Carolina, with his father about 1758, moved to wake county , North Carolina, about 1780, and died in wake county in 1804. Our proven line of Reddings goes to Francis II who made a will wake county in 1801, probated in 1804, in which he named his wife, Mary, and eight children, including James (our ancestor, born about 1760). Mary may have been Francis II's second wife, as some of the children were much younger than others.

7 About 60 miles long and twenty wide, it is roughly triangular in shape and contains 681 square miles. Starting at its uppermost point and continuing clockwise, it is bounded on the North and east by the Roanoke River, by a diagonal line running NE-SW it shares with Martin county , then by Fishing Creek on the south, and finally by a roughly North -south line shared with Warren county on the west. Halifax county , created in 1758 from Edgecombe county , was named for George Montagu, second Earl of Halifax, president of the Board of Trade and Plantations.

8 Edgecombe had earlier been formed from Bertie county , which in turn had once been the western extension of Chowan Precinct (west of the Chowan River), and even earlier an undefined part of the original Albemarle county (which no longer exists). The county seat, also named Halifax (town) had been established in 1757 on the Roanoke River. Located on the fall line of the Piedmont and Coastal Plain, the county has an interesting mixture of flat and hilly terrain. The earliest settlers in this area are found in the records of Albemarle county .

9 In 1722 the Bertie precinct was formed, and ten years later efforts began to create Edgecombe county out of it. Two Episcopal Church parishes existed: St. Mary's south of Fishing Creek, and Edgecombe Parish North of it. The latter is the geographic area which came to be known as Halifax county , North Carolina. Modern-day cities and towns include Roanoke Rapids, Weldon, Littleton, Enfield, Halifax (the present county seat), and Scotland Neck. Enfield was the seat of the judicial district including Northampton, Granville, and Edgecombe county , before Halifax was carved out of it.

10 Southward from Virginia, and westward from the coastal region, migration patterns aided in the early settlement of Halifax county , North Carolina. Many families established themselves and remained there, while multitudes passed through on their way to other counties and states. Toward the latter part of the 17th century, the unsettled lands of North Carolina had been opened for homesteaders. After the Tuscarora Rebellion was crushed in 1712, there was a rush to secure choice plantation sites, especially by younger sons of wealthy families, who by the law of primogeniture inherited no share in their fathers' estates. 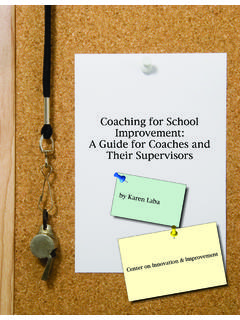 Coaching for School Improvement: A Guide for …

Coaching for School Improvement 4. Discussion of the approaches used by sponsors to monitor coaches for school improvement teams are presented in Section 4.

Communicating with Parents: Strategies for Teachers

Facilitating Family Involvement and Support for …

The School Community Journal, 2008, Vol. 18, No. 2 53 Facilitating Family Involvement and Support for Inclusive Education Yaoying Xu and John Filler Abstract The advantages to a family-centered approach to services have been em- 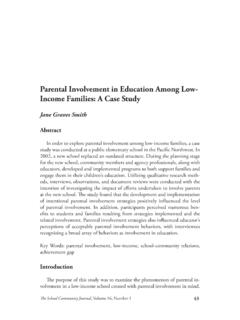 Parental Involvement in Education Among Low- … An Action Guide for Instructional Planning and …

Page 1 of 67 An Action Guide for Instructional Planning and Collegial Learning: Effective Practices and the Common Core State Standards November 2012 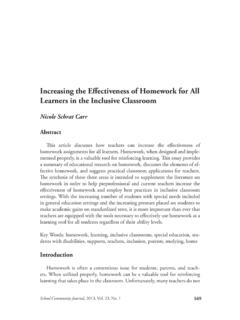 Increasing the Effectiveness of Homework for All …

School Community Journal, 2013, Vol. 23, No. 1 169 Increasing the Effectiveness of Homework for All Learners in the Inclusive Classroom Nicole Schrat Carr Abstract This article discusses how teachers can increase the effectiveness of

PART–TACR CFLICT 239 Review of the Literature For the purpose of this study, family–school partnerships are defined as ongoing, collaborative, and equitable relationships between parents and the

Having Their Say: Parents Describe Why and How …

the school community journal 34 35 Having Their Say: Parents Describe Why and How They are Engaged in Their Children’s Learning Karen L. Mapp

Their, Parents, Having, Describe, Having their say, Parents describe why 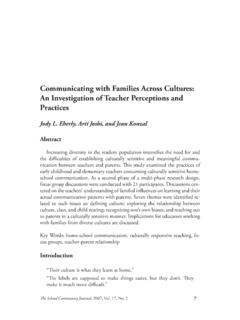 Communicating with Families Across Cultures: An ...

COMMUNICATING ACROSS CULTURES 11 teachers to help them develop skills necessary for cross-cultural communica-tion with parents. The current study is the second of a … 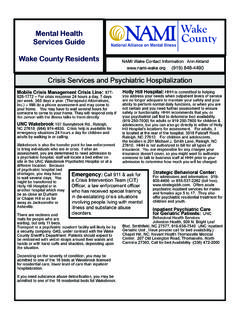 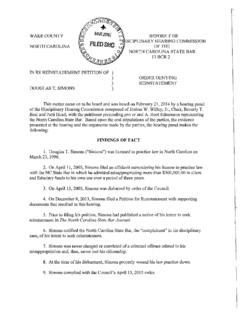 WAKE COUNTY MAR21Jt{.] NORTH CAROLINA IN RE REINSTATEMENT PETITION OF ) ) ) DOUGLAS T. SIMONS ) ORDER DENYING REINSTATEMENT This matter came on to be heard and was heard on February 21, 2014 by a hearing panel 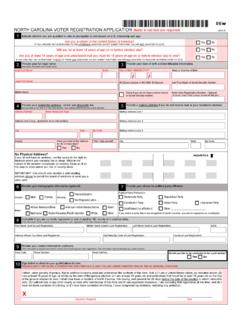 *VR-06-NCVRA0418* 06w NORTH CAROLINA VOTER REGISTRATION APPLICATION (fields in red text are required) v2018.05 1 Indicate whether you are qualified to vote or preregister to vote based on U.S. citizenship and age. Are you a citizen of the United States of America? IF YOU CHECKED “NO” IN RESPONSE TO THIS CITIZENSHIP … 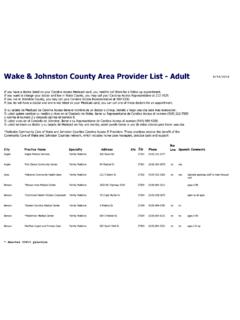 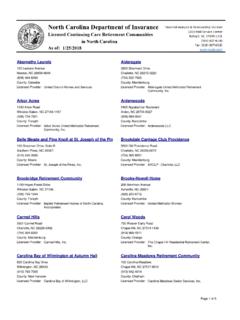 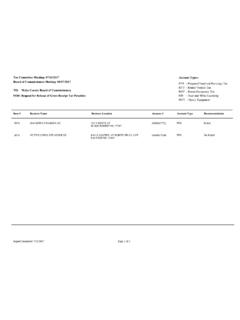