THE COEFFICIENT OF LINEAR thermalexpansion (CTE, , or 1) is a material propertythat is indicative of the extent to which a mate-rial expands upon heating. Different substancesexpand by different amounts. Over small tem-perature ranges, the Thermal Expansion of uni-form linear objects is proportional to tempera-ture change. Thermal Expansion finds usefulapplication in bimetallic strips for the construc-tion of thermometers but can generate detrimen-tal internal stress when a structural part is heatedand kept at constant a more detailed discussion of thermalexpansion including theory and the effect ofcrystal symmetry, the reader is referred to theCINDAS Data Series on Material Properties,Volumes 1 to 4, Thermal Expansion of Solids(Ref 1).

THE COEFFICIENT OF LINEAR thermal expansion (CTE, α, or α 1) is a material property that is indicative of the extent to which a mate-rial expands upon heating.

1 THE COEFFICIENT OF LINEAR thermalexpansion (CTE, , or 1) is a material propertythat is indicative of the extent to which a mate-rial expands upon heating. Different substancesexpand by different amounts. Over small tem-perature ranges, the Thermal Expansion of uni-form linear objects is proportional to tempera-ture change. Thermal Expansion finds usefulapplication in bimetallic strips for the construc-tion of thermometers but can generate detrimen-tal internal stress when a structural part is heatedand kept at constant a more detailed discussion of thermalexpansion including theory and the effect ofcrystal symmetry, the reader is referred to theCINDAS Data Series on Material Properties,Volumes 1 to 4, Thermal Expansion of Solids(Ref 1).

4 Heating or cooling affects all the dimensionsof a body of material, with a resultant change involume. Volume changes may be determinedfrom: V/V0= V Twhere Vand V0are the volume change andoriginal volume, respectively, and Vrepresentsthe volume coefficient of Thermal Expansion . Inmany materials, the value of Vis anisotropic;that is, it depends on the crystallographic direc-tion along which it is measured. For materials inwhich the Thermal Expansion is isotropic, Visapproximately 3 determine the Thermal Expansion coeffi-cient, two physical quantities (displacement andtemperature) must be measured on a sample thatis undergoing a Thermal cycle.

5 Three of the maintechniques used for CTE measurement aredilatometry, interferometry, and thermomechani-cal analysis. Optical imaging can also be used atextreme temperatures. X-ray diffraction can beused to study changes in the lattice parameter butmay not correspond to bulk Thermal dilatometry tech-niques are widely used. With this technique, aspecimen is heated in a furnace and displace-ment of the ends of the specimen are transmittedto a sensor by means of push rods. The precisionof the test is lower than that of interferometry,and the test is generally applicable to materialswith CTE above 5 10 6/K ( 10 6/ F) overthe temperature range of 180 to 900 C ( 290to 1650 F).

6 Push rods may be of the vitreous sil-ica type, the high-purity alumina type, or theisotropic graphite type. Alumina systems can ex-tend the temperature range up to 1600 C(2900 F) and graphite systems up to 2500 C(4500 F). ASTM Test Method E 228 (Ref 2)cove the determination of linear Thermal expan-sion of rigid solid materials using vitreous silicapush rod or tube optical interferencetechniques, displacement of the specimen endsis measured in terms of the number of wave-lengths of monochromatic light. Precision is sig-nificantly greater than with dilatometry, but be-cause the technique relies on the opticalreflectance of the specimen surface, interferom-etry is not used much above 700 C (1290 F).

7 ASTM Test Method E 289 (Ref 3) provides astandard method for linear Thermal Expansion ofrigid solids with interferometry that is applicablefrom 150 to 700 C ( 240 to 1290 F) and ismore applicable to materials having low or neg-ative CTE in the range of <5 10 6/K ( 10 6/ F) or where only limited lengths of thick-ness of other higher Expansion coefficient mate-rials are analysismeasurementsare made with a thermomechanical analyzerconsisting of a specimen holder and a probe thattransmits changes in length to a transducer thattranslates movements of the probe into an elec-trical signal.

8 The apparatus also consists of afurnace for uniform heating, a temperature-sens-ing element, calipers, and a means of recordingresults. ASTM Test Method E 831 (Ref 4)describes the standard test method for linearthermal Expansion of solid materials by thermo-mechanical analysis. The lower limit for CTEwith this method is 5 10 6/K ( 10 6/ F),but it may be used at lower or negative expan-sion levels with decreased accuracy and preci-sion. The applicable temperature range is 120 Chapter 2 Thermal Expansionto 600 C ( 185 to 1110 F), but the temperaturerange may be extended depending on instrumen-tation and calibration ConsiderationsWith respect to temperature, the magnitude ofthe CTE increases with rising Expansion of pure metals has been wellcharacterized up to their melting points, but datafor engineering alloys at very high temperaturesmay be limited.

9 In general, CTE values for met-als fall between those of ceramics (lower values)and polymers (higher values). Common valuesfor metals and alloys are in the range of 10 to 30 10 6/K ( to 10 6/ F). The lowestexpansion is found in the iron-nickel alloys suchas Invar. Increasing Expansion occurs with sili-con, tungsten, titanium, silver, iron, nickel, steel,gold, copper, tin, magnesium, aluminum, zinc,lead, potassium, sodium, and alloysare materials with di-mensions that do not change appreciably withtemperature. Alloys included in this category arevarious binary iron-nickel alloys and several ter-nary alloys of iron combined with nickel-chromium, nickel-cobalt, or cobalt-chromiumalloying.

10 Low- Expansion alloys are used in ap-plications such as rods and tapes for geodeticsurveying, compensating pendulums and bal-ance wheels for clocks and watches, movingparts that require control of Expansion (such aspistons for some internal-combustion engines),bimetal strip, glass-to-metal seals, thermostaticstrip, vessels and piping for storage and trans-portation of liquefied natural gas, superconduct-ing systems in power transmissions, integrated-circuit lead frames, components for radios andother electronic devices, and structural compo-nents in optical and laser measuring and Aluminum di-mensional change of aluminum and its alloyswith a change of temperature is roughly twicethat of the ferrous metals. 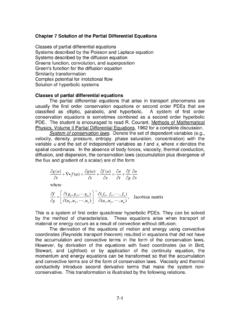 Chapter 7 Solution of the Partial Differential …

1 PHYS 331: Junior Physics Laboratory I Notes on Analog Circuits Digital circuits deal, in principle, with only two values of voltage, whereas analog circuits 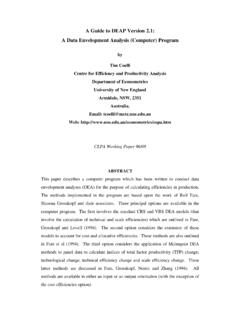 A Guide to DEAP Version 2.1: A Data Envelopment Analysis (Computer) Program by Tim Coelli Centre for Efficiency and Productivity Analysis Department of Econometrics 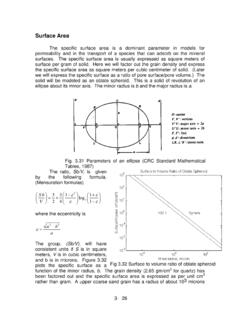 Finally, the founding result of Game Theory, known as the minimax theorem, says that optimal strategies exist when our players can randomize over a ﬁnite set of deterministic strategies. 1.2 Two-person zero-sum games in strategic form A two-person zero …

Physics 231 Reflection and Refraction 3 the prism table so that the laser beam strikes the prism face at a modest angle, and locate the refracted beam emerging from the other face.

Plotting Data with Microsoft Excel Here is an example of an attempt to plot parametric data in a scientifically meaningful way, using Microsoft Excel. This example describes an experience using the Office X version for Macintosh. The details may change with different versions, but the principle

PHYS 112 The Oscilloscope 3 The vertical system accepts input signals and develops appropriate deflection voltages for the CRT. Because this is a two-channel scope there are two identical sets of vertical controls, one 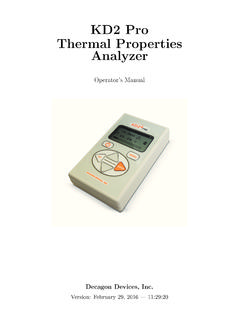 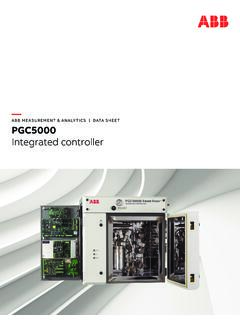 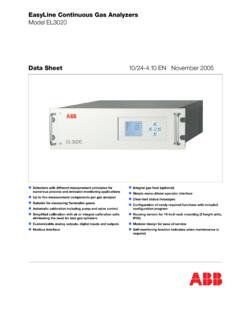 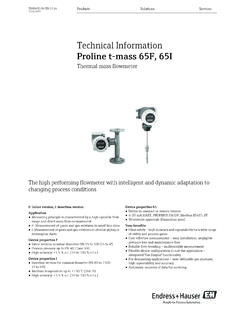 Proline t-mass 65F, 65I 4 Endress+Hauser Function and system design Measuring principle The thermal principle operates by monitoring the cooling effect of a gas stream as it passes over a 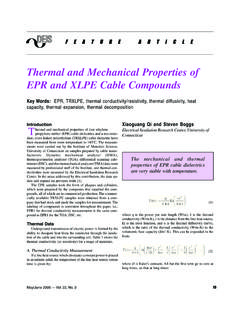 Thermal and Mechanical Properties of EPR and XLPE Cable ... 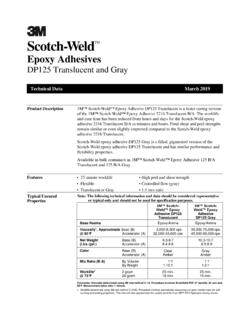 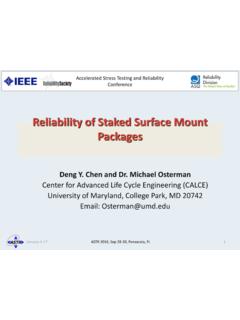