46 Community-Based RESEARCH : A Handbook for Native AmericansPage you have any suggestions for improvement of the following areas?Instruction;Counseling:Services:Te xtbooks:Facilities:Students:Administrato rs:Teachers:Other Personnel:Cultural Activities:Extra-curricular Activities:Policies:Funding:4. Do you have any other comments?Respondent iChapter 3 SURVEYRESEARCHA SURVEY is a method of collecting data in aconsistent way. SURVEY RESEARCH is useful for doc-umenting existing community conditions,characteristics of a population, and communityopinion. In this Chapter , you will find an outlineof the steps needed to conduct surveys using boththe questionnaire and interview methods.

Jan 02, 1981 · planned. The appropriate survey design will vary according to the goals of the project, the time limits that may exist, and the resources available to the project. For example, if documentation is needed on the socio-economic conditions of an area for the purpose of immediate development work, then a cross-sectional survey might provide the ...

1 46 Community-Based RESEARCH : A Handbook for Native AmericansPage you have any suggestions for improvement of the following areas?Instruction;Counseling:Services:Te xtbooks:Facilities:Students:Administrato rs:Teachers:Other Personnel:Cultural Activities:Extra-curricular Activities:Policies:Funding:4. Do you have any other comments?Respondent iChapter 3 SURVEYRESEARCHA SURVEY is a method of collecting data in aconsistent way. SURVEY RESEARCH is useful for doc-umenting existing community conditions,characteristics of a population, and communityopinion. In this Chapter , you will find an outlineof the steps needed to conduct surveys using boththe questionnaire and interview methods.

2 Detailson preparing questionnaires and interviewschedules are presented,alongwith acomparison of both methods for different com-munity-based situations. SURVEY data is not onlyuseful for immediate community developmentpurposes, but it can also serve the future of acommunity efforts by providing the baseline dataneeded later to demonstrate Community-Based RESEARCH : A Handbook for Native AmericansSurveys are one of the most common forms of RESEARCH to reach nativecommunities, to the point that the common community reaction is "Notanother SURVEY !" Such a reaction is usually due to the hundreds of surveysconducted by academic researchers and federal agencies, where the re-sults rarely came back to the community directly.

3 In these times ofchange, many community groups are conducting their own surveys andparticipating in the definition of the questions asked by the surveys ofother researchers. This type of cooperative SURVEY effort can be a strongtool for community specifically, surveys can be useful for:Determining the characteristics of a population or a community Defining existing conditions in a community or region Documenting community opinion Comparing groups of communitiesAll of the above purposes for conducting surveys can be directly applied tothe development and management of community specifically, a SURVEY is a method of collecting data in aconsistent, or systematic, way.

4 This usually involves constructing a set ofquestions that are either asked by means of a questionnaire or through aninterview. In relation to the methods presented in the previous Chapter ,needs assessments often use SURVEY techniques. This Chapter will present abroader view of the uses and techniques of the OF SURVEYST here are several different approaches to conducting a SURVEY . One verycommon approach is the cross-sectional SURVEY , where a set of infor-mation is collected for a sample at one point in time. Data may becollected from a sample of the population or from the entire population orcommunity. When the data can be collected from an entire population, asmay be the case in the small community or tribe, then the SURVEY is some-times called a census.

5 When the data are analyzed from a cross-sectionalsurvey, the results can vary from tabulations of answers on singlequestions to a more complex analysis exploring the relationships betweenvariables. Even though the data are collected at one point in time withthe cross-sectional SURVEY there are methods of comparing items or lookingfor change. For example,.the questions asked may be time-ordered,referring to events in the past, present, or the future. The responses onsuch questions can provide a basis for looking at change, but with the dis-advantage that the person answering the questions may distortimpressions of an event over longitudinal SURVEY provides another means of looking at changesSurvey Researchover time.

6 With this type of SURVEY , the data are actually collected at dif-ferent points in time. This can be accomplished by either sampling from apopulation at different points in time, or by following-up on a group ofindividuals at different points in time. The main problem seen withfollow-up on a group of individuals is loss of participants (also known asdrop-out or attrition). With the small community, it may be possible tofollow-up with nearly the entire population and tracking those who mayhave moved through the community network. Sometimes it may bepossible to use the results of a previous study for a past perspective,followed up with the same questions in a current study.

7 Although thismethod carries the advantage of reduced time and funds, it also requirescaution in seeing that the questions are asked in the same way for thedifferent points in time. An example of a longitudinal SURVEY would be astudy of native language use within the community, where questions onlanguage use are asked five years apart to see if there had been any'changein the amount of language use. Such a study might look at reasons fordecreased or increased language use and relate these changes to culturalchange. The data obtained from such a study could be useful indocumenting the structure of a bilingual education distinctions are sometimes made within the longitudinal surveydesign.

8 With the trend study, a general population is sampled at morethan one point over time. While the same individuals are not surveyedeach time, the assumption is made that each sample represents the samepopulation. During the cohort study, a specific population is followedover a period of time. For example, high school graduates at differentyears might be surveyed to note changes in this group over the years. For apanel study, a specific sample of individuals is followed at different pointsin time. Attrition tends to affect this last type of longitudinal many researchers are in favor of the more complex surveydesign, it cannot be overemphasized that even the most descriptivetabulations of simple responses on culturally appropriate questions aremore valuable than complex, statistically sophisticated analyses on ques-tions that may be inappropriate to the community.

9 A basic, descriptivedesign is also often a good first step toward finding direction for a morecomplex design later on. The most important factors in choosing a designare the needs and the resources of the FORCONDUCTING A SURVEYThe following steps are intended as a general outline of the methodsgenerally used in conducting a SURVEY . Consideration of these steps is use-ful in completing the SURVEY design before the actual RESEARCH begins. Anoverview of the steps involved in the SURVEY process is given in thefollowing RESEARCH : A Handbook for Native AmericansDefine Purposeof StudytDetermineGoals &ObeectivesLocate OtherSurveys forExamples &DataiPlan theSurvey Design& SamplingMethodsIDesign theInstrumentfor DataCollectionConduct aPretestNeedto ReviseInstrument?

10 NoTrain Staff& Collectthe DataIsResponseRate 100%of SampleyesAnalyze theDataesnoMakeRevisions inInstrumentConductFollow-upto IncreaseResponseReport orApply theResultsFigure FOR CONDUCTING A SURVEYS urvey RESEARCH 51 Step 1: Defining the purpose of the SURVEY is an important first step indeveloping the RESEARCH design. The more tightly focused the study, themore useful the results are likely to be for community development. Onecommon mistake made in a community SURVEY is to collect a wide range ofdata that does not relate to a specific purpose. This is different fromconducting a multi-purpose SURVEY , where several different goals aredecided upon and the questions are designed to address the differentgoals. 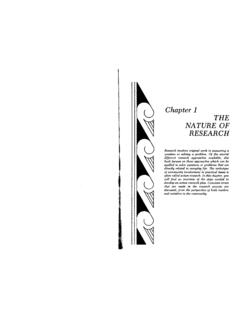 Chapter I THE NATURE OF RESEARCH - UCLA

Chapter I THE NATURE OF RESEARCH Research involves original work in answering a question or solving a problem. Of the several different research approaches available, this

Research, Chapter, Nature, Chapter i the nature of research 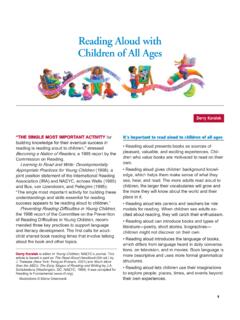 Reading Aloud with Children of All Ages

Appropriate Practices for Young Children (1998), a joint position statement of the International Reading ... books with brief, simple plots and only a few words per page. • Toddlers are curious. Read books about special interests and books about new people, places, and events. 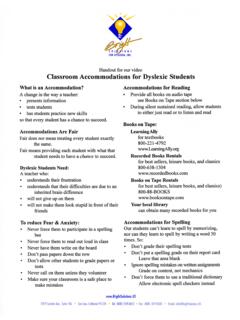 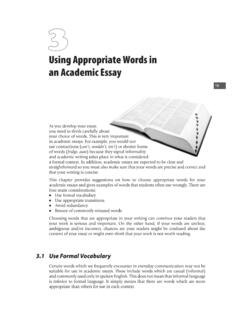 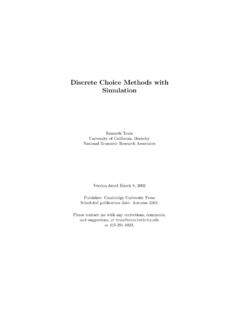 important when choosing the appropriate method in any particular application and for developing new methods when none of the existing models seems right. The purpose of this book is to assist readers along this path. Second, toimplementanewmethod, oravariantonanoldmethod, the researcher needs to be able to program the procedure into com-puter ... 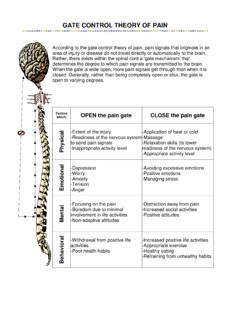 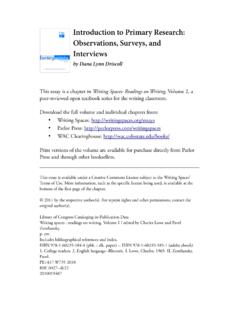 Introduction to Primary Research: Observations, Surveys, and Interviews by Dana Lynn Driscoll This essay is a chapter in Writing Spaces: Readings on Writing, Volume 2, a peer-reviewed open textbook series for the writing classroom. 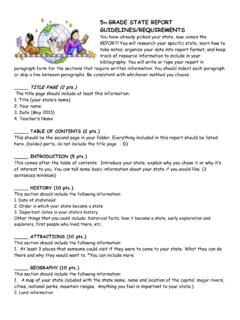 3. Area (size) of the state 4. Rivers, lakes, mountains, etc. Other things that you could include: famous land forms, national parks, important elevations, etc.