Chapter 4 British Mercantilism and the Cost of Empire T

Page 14 Chapter 4 British Mercantilism and the Cost of Empire hree hundred years ago, nations wanted colonies in order to increase their power. According to the economic thinkers of those days, colonies would help the mother country become self-sufficient and wealthy. No great nation could exist without colonies. This was the idea behind Mercantilism , a forerunner of the present day idea of imperialism. T England, Spain, France, and other nations competed with each other to own colonies in North America, South America, Asia, and Africa. Their competition often led to wars.

England, Spain, France, and other nations competed with each other to own colonies in North America, South America, Asia, and Africa. Their competition often led to wars. The mercantilists reasoned that even wars were worth the price, because each colony would be a help to its conqueror. England needed raw materials that her colonies could supply.

1 Page 14 Chapter 4 British Mercantilism and the Cost of Empire hree hundred years ago, nations wanted colonies in order to increase their power. According to the economic thinkers of those days, colonies would help the mother country become self-sufficient and wealthy. No great nation could exist without colonies. This was the idea behind Mercantilism , a forerunner of the present day idea of imperialism. T England, Spain, France, and other nations competed with each other to own colonies in North America, South America, Asia, and Africa. Their competition often led to wars.

2 The mercantilists reasoned that even wars were worth the price, because each colony would be a help to its conqueror. England needed raw materials that her colonies could supply. Lumber, wool, iron, cotton, tobacco, rice, and indigo were among the products needed in England. British manufacturers in the meantime needed markets for the goods they produced. The American colonies bought their cloth, furniture, knives, guns, and kitchen utensils from England. In addition, England s survival as a nation depended on her navy, and the colonies were a constant source of both the timber for her ships and the men who could sail them.

3 Since each nation's wealth in those days was measured in the amounts of gold and silver it possessed, England had yet a another reason for establishing and ruling a vast colonial Empire : the colonists would supply their British masters with gold and silver simply by selling their raw materials and buying England s manufactured products. The difference between what the colonists could pay through their sales of raw materials, and what they owed because of the purchase of manufactured goods, is called the balance of trade. Since the colonists bought more than they sold, their balance of trade was said to be unfavorable.

4 The difference would have to be made up in such precious metals as gold and silver. By thus supplying Britain with this gold and silver, to make up for their unfavorable balance of trade, the American colonists were fulfilling the British mercantilists fondest dreams. England was not content with allowing trade to develop in whatever manner their colonies found convenient or best for their own interests. Instead, England passed special laws to govern the flow of goods across the Atlantic. England placed restrictions on colonial exports, imports, and manufacturing.

5 At the same time, she encouraged the production of certain naval products in the colonies, and permitted American as well as British ships to transport goods between mother England and colonial America. These laws, of course, irritated the colonists who were adversely affected by them. But, whether the colonists were seriously hurt by these laws is an open question which the reader is invited to explore. The question is important because, in this economic relation between crown and colony , one may find the real causes of the American Revolution. Enumerated Goods Restrictions on Exports When the first Englishmen settled in Jamestown, Virginia, and in Plymouth, Massachusetts, England did little to direct their trade.

6 As the colonies grew more prosperous, however, England began to enforce her mercantile ideas. A series of laws were passed in the 1660s known as the Navigation Acts. They were designed to make the American colonies dependent on the manufactured products of England. The colonists, of course, were expected to buy more from England than they sold to her and pay the difference in gold and silver. Therefore, the British forbade all non-English ships from trading with the colonies. Because ships made in the colonies were considered British , they too were restricted to trade between homeland and mother country.

7 Thomas Ladenburg, copyright, 1974, 1998, 2001, 2007 Page 15 In addition to these regulations, England also enumerated, or listed, special products that could be sold only to British merchants. Included in this list of enumerated goods were products most generally considered essential to England s wealth and power: sugar, tobacco, cotton, indigo, and later rice, molasses, naval stores (tar, pitch, etc.), furs and iron. English merchants were allowed to sell these goods to whomever they chose as long as they were first taken to England or Scotland where a tariff would be charged.

8 Thus, if a Virginian planter wished to sell his tobacco, he could only sell it to an English merchant. The Englishman then had to take it to England, pay taxes on it there, and only then could he sell the tobacco in France or any other country. Staples Act: Restrictions on Imports In 1663 Parliament passed the Staples Act, which forbade the colonists from buying any products grown or manufactured in Africa, Europe, or Asia. Unlike the enumerated list of export restrictions, the Staples Act prohibited the importing of almost every article that was either not produced in England or was not shipped there first.

9 Thus, if a colonist wished to buy French silks, Dutch linens, or Indian tea, he would buy these goods from an English importer. The Englishman in this example would have bought these goods from France, India, or Holland. Neither the Englishman nor the colonial merchant was allowed to bring these products directly to the colonies. Instead, all had to pay for the added expense and inconvenience of all non-English products taking a far longer route to the colonies which included the loading and unloading, storing, and taxing of all the goods involved.

10 The exceptions to the provisions of this bothersome Staples Act, like wine from the Madeira Islands, were few and relatively unimportant. Restrictions on Manufacturing According to mercantile theory, colonies were to supply their mother nation with raw materials and buy their manufactured goods. Therefore, colonies should not have been encouraged to develop their own industries. England, however, made few attempts to restrict colonial manufacturing. She merely prevented the colonists from shipping certain products from one colony to another. For example, colonists were not permitted to sell either wooden goods or beaver hats to other colonies. 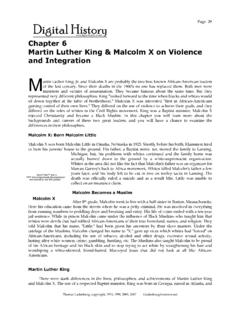 Martin Luther King & Malcolm X on Violence and Integration artin Luther King, Jr. and Malcolm X are probably the two best known African-American leaders of the last century. Since their deaths in the 1960's no one has replaced them. Both men were ministers and victims of assassination. They became famous about the same time. 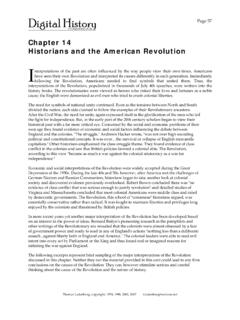 The Causes of the American Revolution - Digital History

war against the colonial aristocracy as a war for independence. The American Revolution thus marks the ascendancy of the radicals of the colonies, for the first time effectively united. 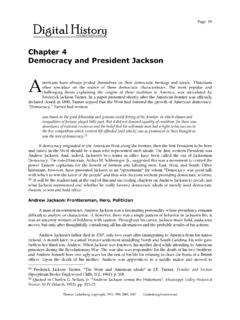 Chapter 4 Democracy and President Jackson A

A man of inconsistencies, Andrew Jackson was a fascinating personality whose presidency remains difficult to analyze or characterize. If, however, there was a single pattern of behavior in Jackson's life, it 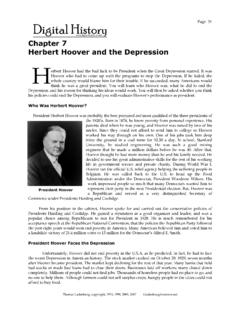 Page 31 Thomas Ladenburg, copyright, 1974, 1998, 2001, 2007 t.ladenburg@verizon.net Chapter 7 Herbert Hoover and the Depression erbert Hoover had the bad luck to be President when the Great Depression started. 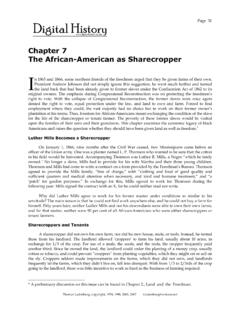 Chapter 7 The African-American as Sharecropper I

African-Americans often meant continuing to work the white man’s land or to work in his house. Seventy Years Later: The Slave’s Grandson The real meaning of the sharecropping and crop lien system some seventy years after slavery is 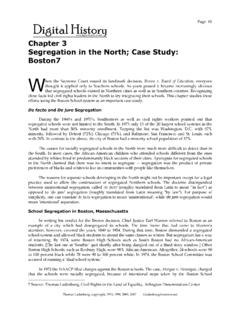 were not responsible for creating these conditions, they could not be required to correct them. Facts in the Case The case brought against the Boston School Committee was tried by Judge Arthur Garrity. 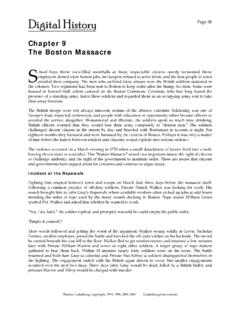 This "Boston Massacre" raised two important issues: the right of citizens to challenge authority and the right of the government to maintain order. These are issues that citizens 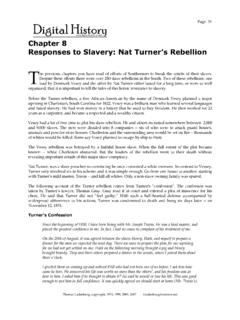 Nat Turner, was a slave preacher so convincing he once converted a white overseer. In contrast to Vessey, Turner only involved six in his scheme and it was simple enough.

Chapter 4 How the US Obtained the Panama Canal

Canal Chapter 4 How the US Obtained the Panama Canal T his is the story of how the United States obtained the right to build a canal through what was once ... Oregon was stationed in San Francisco when the war broke out and its progress toward the war zone was duly reported in the newspapers as it sailed around the Straits of Magellan and north ...

Zones, Panama, Canal, Obtained, The us obtained the panama canal

Methods of Controlling Slaves frican-Americans were not naturally born slaves In their native land, they had been proud, free, and independent people. As slaves, many rebelled, more ran away, and most often slowed down on the job, avoided work, deliberately broke tools, or pretended not to understand commands. 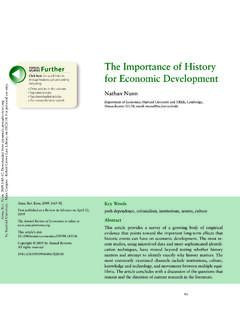 The Importance of History for Economic Development

which secure property rights were established in the colony, and through their persistence, ... European countries with a legal system based on Roman civil law—namely Spain, France, and Portugal—transplanted civil law legal systems. La Porta et al. (1997, 1998) used this