1. Chapter 6, Harris CRYSTAL SETS TO SIDEBAND Frank W. Harris 2010, REV 12 Chapter 6 BUILDING A HOMEBREW QRP Among the guys I work, QRPs seem to be the most common HOMEBREW project, second only to BUILDING antennas. Therefore this Chapter describes a simple QRP design I have settled on. I use my QRPs as stand-alone transmitters or I use them to drive a final amplifier to produce higher power, 25 to 100 watts. It s true that before you build a transmitter you ll need a receiver. Unfortunately, a good selective, all-band ham receiver is complicated to build and most guys don t have the time and enthusiasm to do it. (See Chapter 13.) On the other hand, Chapter 7 describes BUILDING a simple, 5-transistor 40 meter receiver that I have used with the QRP below to talk to other hams.

2. Chapter 6, Harris Unfortunately crystal control means you must order $18 custom crystals for your favorite frequencies in each band.

1 1. Chapter 6, Harris CRYSTAL SETS TO SIDEBAND Frank W. Harris 2010, REV 12 Chapter 6 BUILDING A HOMEBREW QRP Among the guys I work, QRPs seem to be the most common HOMEBREW project, second only to BUILDING antennas. Therefore this Chapter describes a simple QRP design I have settled on. I use my QRPs as stand-alone transmitters or I use them to drive a final amplifier to produce higher power, 25 to 100 watts. It s true that before you build a transmitter you ll need a receiver. Unfortunately, a good selective, all-band ham receiver is complicated to build and most guys don t have the time and enthusiasm to do it. (See Chapter 13.) On the other hand, Chapter 7 describes BUILDING a simple, 5-transistor 40 meter receiver that I have used with the QRP below to talk to other hams.

2 This simple receiver will work best during off hours when 40 meters isn t crowded. It can also be used to receive Morse code for code practice. A 40 meter QRP module. The transmitting frequency of the QRP module is controlled by a quartz crystal. That s the silver rectangular can plugged into the box on the right front. The knob on the far right is a variable capacitor for adjusting or pulling the crystal frequency over a range of about 3 KHz. As we shall explain in Chapter 10, a variable frequency VFO that can cover the entire band is hard to build. I don t recommend starting out with a VFO. You need success, not frustration. Start simple The easiest QRP is just a crystal-controlled oscillator. It usually has one to three amplifier stages to raise the power to between 1/2 to 5 watts.

3 This will get you on the air quickly. The QRP transmitter shown on the left is designed exclusively for 40 meters, ( to MHz.) The twelve volt power supply comes in through the pig-tail wire on the right. The telegraph key plugs into the blue- marked phono-plug socket on the right of the aluminum heat sink. The antenna output is the red-colored socket on the left end of the heat sink. 2. Chapter 6, Harris Unfortunately crystal control means you must order $18 custom crystals for your favorite frequencies in each band. Because the oscillator only has a very narrow tuning range, you can usually only call CQ (calling any station). As luck would have it, it always seems as though the other fellow calling CQ is just out of your crystal range.

4 The transmitter mainframe You could use this bare-board little transmitter just as shown above. However, it will be more convenient to mount it in a larger chassis equipped with an ON/OFF switch, pilot lights, an antenna relay, and other niceties. My whole transmitter assembly is shown below. Transmitter mainframe really big plans. By the time you add multi-band capability, a VFO, power supplies, and single-sideband capability, even a large box may be too small. My previous mainframe was too small so I made this one extra large to eliminate crowding. HF construction methods BUILDING your own circuit boards Back in the vacuum tube days we built hand-wired HF transmitters. Inside they had long skinny wires running every which way. However, transistors generate high power with low voltage and big currents.

5 As a result, the inductance of the wiring must be kept as low as possible. This means you must build with printed circuit boards or the transmitter simply won t work. For example, once I connected an output lead from a 21 MHz (15 meter band) transistor power amplifier to the base of the next stage with a bare wire 4 inches long. If this had been a vacuum tube circuit, this wire coupling would have worked well. But with high current transistors, the wire acted like an RF choke. That is, the wire blocked current flow as if it were The transmitter mainframe is a box to contain your transmitter modules. The large meter at the upper right indicates the current drawn by the final amplifier. It's helpful to know how much power the transmitter is consuming.

6 The switches and lights on the lower left are the main power switch and the transmit/ receive switches. There are also LED lights to indicate which switches are active. The large red button is a spot switch. With the spot switch engaged, the QRP oscillator may be tuned to another station without actually transmitting. How big you make your mainframe depends on your plans and ambitions. As you can see, I had 3. Chapter 6, Harris an inductor. Sliding an oscilloscope probe along the wire, I could see an 80% drop in drive voltage from the output of the first amplifier to the input of the next stage. In contrast, a wide circuit trace printed on a circuit board acts like a coaxial cable and has very low inductance.

7 With a PC board the same drive to the next stage can be nearly 100%, not 20%. If you have already developed your own method of making printed circuit boards, you may skip ahead. But if you have never done this before, read on. MAKING PROTOTYPE RF CIRCUIT BOARDS PC board tools and materials I usually use double-sided printed circuit (PC) board material such as Radio Shack part # 276-1499A. This board has layers of thin copper bonded to both sides of a 1/16th inch fiberglass sheet. I only solder components onto the surface of one side. The solid surface of grounded copper on the opposite side provides distributed capacitance over the whole circuit. I believe this gives extra stability and works as a grounded shield to prevent radiating signals to whatever circuits might be adjacent to the bottom of the board.

8 Traces on a PC board act like transmission lines A transmission line, such as the coaxial cable that delivers your TV signals, is remarkably efficient. As explained in Chapter 4, the wire in the center of the coax acts like a distributed inductance that rings with the distributed capacitance between the center wire and the outside insulation. In other words, a coaxial cable is a distributed LC circuit and does not dissipate voltage and energy as you would otherwise expect. In fact, the energy losses that do occur are only the heating losses in the insulation and the simple resistance losses that happen in copper wire. A two-sided circuit board can be designed to act like a circuit wired with pieces of coax. The circuitry is mounted on one side of the board while the other side is ground.

9 Each trace has a small amount of inductance and each trace has a proportional amount of capacitance with the grounded copper sheet on the far side of the board. The result is that signals are almost unchanged as they travel along the traces of a circuit board. It would be interesting to build the exact same RF power amplifier on single-sided and double-sided boards and compare the difference in performance at HF frequencies. I m convinced double-sided is far better, but I've never done a controlled experiment. In microwave printed circuit boards the traces are deliberately designed to act like transmission lines for the particular frequency that is being used. The precise, optimum dimensions for these microstrip traces can be calculated for maximum performance.

10 Fortunately for us, high frequency circuit boards like ours don t have to be designed with so much care. Etched circuit boards There are at least four ways to make HOMEBREW RF boards. Originally I tried etching real printed circuit boards with ferric-chloride solution. It s slow, messy, and lots of work. Etching boards is an art that isn't easy to master. You may under-etch or you may over-etch, often on the same board! If you succeed, you ll have a result close to a commercial product. 4. Chapter 6, Harris Unfortunately, when you use a circuit layout from an ARRL handbook or QEX magazine, you are making the assumption that you can buy all the exact parts the author used. Good luck! The parts you can actually buy may not fit on the board. 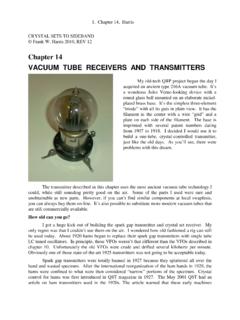 4. Chapter 14, Harris described here needs at least 250 volts to deliver 5 watts output. And because of its low energy conversion inefficiency, plan on supplying 15 watts DC power instead of just 5 watts.

4. Chapter 10, Harris minimal and unchanging. While we’re on the subject, you might experiment with substituting an LM336-2.5 volt precision Zener diode for the 5 volt diode.

3. Chapter 2, Harris vehicle, you don’t even need a power supply, you just run it directly off the battery using the cigarette lighter outlet. 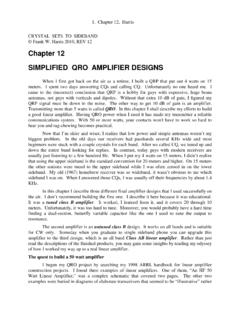 4. Chapter 12, Harris RF input drive, the transistors immediately ran away and drew huge currents. Gee, something must be wrong with the bias circuit! 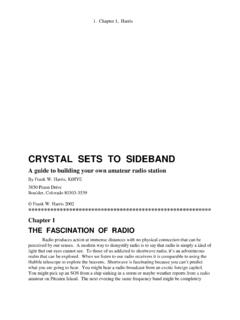 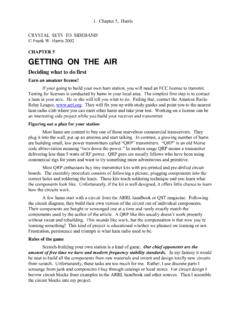 CHAPTER 5 GETTING ON THE AIR - QRP ARCI

3. Chapter 5, Harris certain kinds of integrated circuit. My rules have taught me how the circuits work. I’ve learned plenty. And by golly, when

Rules, Chapter, Getting, Chapter 5 getting on the 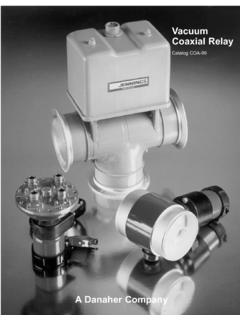 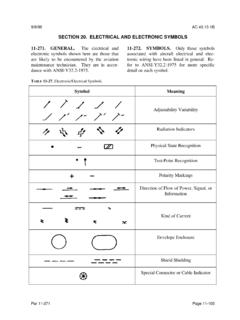 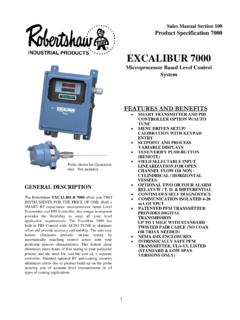 1 GENERAL DESCRIPTION The Robertshaw EXCALIBUR 7000 offers you TWO INSTRUMENTS FOR THE PRICE OF ONE. Both a SMART RF capacitance microprocessor based Level ...