2 Styles which are central to today's paradigm of effective School Leadership . However, the prevalence of such practices varies greatly by country and they are much more in evidence in some countries such as Brazil, Poland and Slovenia than they are in others, such as Estonia and Spain. Across TALIS countries, a significant number of principals employ both instructional and administrative Leadership styles. Greater autonomy for the School principal in decision making about schools is not related to either management style. In more than half of the TALIS countries, schools with more pronounced instructional Leadership tend to link teacher appraisals with teachers' participation in professional development.

4 OECD 2009 Creating Effective Teaching and Learning Environments: First Results from TALIS ISBN 978-92-64-05605-3. Leading TO learn : School Leadership AND MANAGEMENT STYLES CHAPTER 6. 191. INTRODUCTION. Teachers teach and work in schools that are usually administered by managers, often known as principals or headmasters. School administration is itself often part of larger administration units. The conditions of teachers'. working life are influenced by the administration and Leadership provided by principals, and it is widely assumed that School Leadership directly influences the effectiveness of teachers and the achievement outcomes of students ( Hallinger and Murphy, 1986; OECD, 2001; Pont, Nusche and Moorman, 2008).

5 In OECD countries as elsewhere in the world, School leaders face challenges due to rising expectations for schools and schooling in a century characterised by technological innovation, migration and globalisation. As countries aim to transform their educational systems to prepare all young people with the knowledge and skills needed in this changing world, the roles of School leaders and related expectations have changed radically. They are no longer expected merely to be good managers; effective School Leadership is increasingly viewed as key to large-scale education reform and to improved educational outcomes. Since at least 2001, with its series of reports, What Works in Innovation in Education, produced by the Centre for Educational Research and Innovation, the OECD has recognised the significant challenges faced by principals and School managers in member countries (OECD, 2001).

6 As countries increasingly turn to improving education to address an ever more complex world, many governments give School Leadership more responsibility for implementing and managing significantly more demanding education programmes. Globalisation and widespread immigration mean that children, youth and their families represent an increasingly challenging clientele for schools in many countries. Also, the standards to which schools must perform and the accountability required of management raise expectations regarding School Leadership to an unprecedented level. A recent OECD report, Improving School Leadership , summarises the changing landscape of schools and their management over recent decades (Pont, Nusche and Moorman, 2008, p.)

7 6): In this new environment, schools and schooling are being given an ever bigger job to do. Greater decentralisation in many countries is being coupled with more School autonomy, more accountability for School and student results, and a better use of the knowledge base of education and pedagogical processes. It is also being coupled with broader responsibility for contributing to and supporting the schools' local communities, other schools and other public services. This report argues that to meet the educational needs of the 21st century the principals in primary and secondary schools must play a more dynamic role and become far more than an administrator of top-down rules and regulations.

8 Schools and their governing structures must let School leaders lead in a systematic fashion and focus on the instructional and learning processes and outcomes of their schools. These recommendations flow from a field of education that has recently experienced a fundamental change in its philosophy of administration and even in its conception of schools as organisations. A significant research literature also indicates that what the public and other stakeholders of schools want as learning outcomes for students can only be achieved if School Leadership is adapted to a new model (Pont, Nusche and Moorman, 2008). These changes are directly relevant to the working lives, professional development, instructional practices, pedagogical beliefs and attitudes and the appraisal and feedback of secondary School teachers, all of which were measured in the TALIS survey.

9 From bureaucratic administrator to leader for learning Changes in School administration over recent decades are part of a larger trend in the management of public service organisations that can be characterised as the decline of older public administrative models and the rise of a new public management (NPM) model. The ideas and research findings behind the NPM model in public Creating Effective Teaching and Learning Environments: First Results from TALIS ISBN 978-92-64-05605-3 OECD 2009. 192. CHAPTER 6 Leading TO learn : School Leadership AND MANAGEMENT STYLES. services flatter management structures, market-like mechanisms, decentralisation, customer orientation and evidence-based improvement of services have significantly changed the approach to organisational management ( Barzelay, 2001; Jones, Schedler and Wade 1997; Sahlin-Andersson, 2000; Schedler and Proeller, 2000).

10 The effectiveness of these changes is still debated in education research and policy circles, but it is clear that these ideas, and the debate surrounding them, have changed the terms of management. Perhaps the most salient change in attitudes about School management created by the NPM trend is the centring of the principal's activity and behaviour on what is referred to as instructional Leadership (Wiseman, 2002, 2004a). The term instructional leader has been explicitly promoted for principals since the beginning of the effective schools movement around 1980 in the United States (Blumberg and Greenfield, 1980; Bossert et al.) 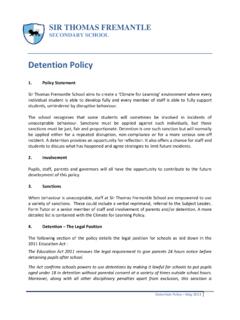 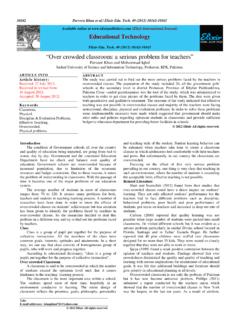 Parent involvement in education: models, strategies and contexts Shawn Moore, Sue Lasky In this paper, we explore the conceptual, empirical and …