CHAPTER POWER. Power is one of the prime movers of of the ongoing, sanctioned and new projects in the economic development. The level of availability and pipeline, the Planning Commission assessed that accessibility of affordable and quality power is also a capacity addition target of the order of 41,110 MW. one of the main determinants of the qualify of life. (comprising 18,659 MW from on-going, 9,193 MW. The Government has, since Independence, been from projects cleared by the Central Electricity giving priority to this sector while fixing the Plan Authority (CEA) and 13,258 MW from new outlays. As a result, the installed generation capacity schemes) would be more realistic. has risen from a mere 1,300 megawatt (MW) at the time of Independence to more than 1,00,000 MW The Government proposes to enhance today.

1 CHAPTER POWER. Power is one of the prime movers of of the ongoing, sanctioned and new projects in the economic development. The level of availability and pipeline, the Planning Commission assessed that accessibility of affordable and quality power is also a capacity addition target of the order of 41,110 MW. one of the main determinants of the qualify of life. (comprising 18,659 MW from on-going, 9,193 MW. The Government has, since Independence, been from projects cleared by the Central Electricity giving priority to this sector while fixing the Plan Authority (CEA) and 13,258 MW from new outlays. As a result, the installed generation capacity schemes) would be more realistic. has risen from a mere 1,300 megawatt (MW) at the time of Independence to more than 1,00,000 MW The Government proposes to enhance today.

2 Along with the growth in installed generation public funding for the sector as well as encourage capacity, there has also been a phenomenal the public sector undertakings (PSUs) to take up increase in the transmission and distribution (T&D) projects in joint ventures with private investors and capacity. However, despite these achievements, state governments during the Tenth Plan period. the power sector has not kept pace with the growth As part of these efforts, the Accelerated Generation in demand with the result that the country has and Supply Programme (AG&SP) is proposed to always faced energy and peaking shortages. be extended during the Tenth Plan to provide funds to critical on-going schemes at subsidised interest The state electricity boards (SEBs), have, rates.

3 There is also a focus on initiating suitable in the past, played a significant role in the generation policy measures to accelerate the pace of hydro and supply of power. But the present financial health power development as well as to make nuclear of the SEBs is not sound, to say the least. This is power generation as competitive as power mainly due to un-economic tariffs for agriculture, generation from other fuels. The Government is lower slabs of domestic consumption and high T&D making concerted efforts to channelise adequate losses, which often disguise large-scale theft, and investment to ensure the completion of the National low billing and collection efficiency. This is the main Grid by the end of the Eleventh Plan.

4 This would roadblock to attracting the much-needed private enhance the inter-regional transfer of power and investment and, in fact, has been one of the main facilitate the optimum utilisation of existing assets. reasons for the shortfall in capacity addition from private sector projects during the Ninth Plan. The Power sector reforms were initiated in 1991. actual capacity addition during the Ninth Plan was to encourage competition in each sub element of 19,015 MW against a target of 40,245 MW. The the sector, namely, generation, transmission and other major reasons for shortfall in the capacity distribution under an independent and transparent addition were delay in land acquisition and regulatory regime.

5 With this objective in mind a environmental clearances, unresolved issues in fuel Central Electricity Regulatory Commission (CERC). linkages, contractual problems, resettlement and has already been set up at the national level and rehabilitation (R&R) problems and law and order State Electricity Regulatory Commissions (SERCs). problems. set up in 19 states, 11 of which have issued tariff orders. Private sector participation has also been As far as the Tenth Plan is concerned, the set in motion with the enactment of the Electricity Working Group Report on Power has envisaged a Laws (Amendment) Act in 1998. The draft Electricity capacity addition requirement of 46,939 MW during Bill, 2001 has been introduced in Parliament which the Plan period.

6 However, keeping in view the status will replace the existing three laws relating to 897. TENTH FIVE YEAR PLAN 2002-07. electricity: the Indian Electricity Act, 1910 as by 2011-12 through the use of decentralised non- amended from time to time; the Electricity (Supply) conventional sources of energy. In order to facilitate Act, 1948 as amended from time to time; and the the flow of funds, the rural electrification programme Electricity Regulatory Commission Act, 1998. has been included as a component of the Pradhan Mantri Gramodaya Yojana (PMGY) and the states The Electricity Bill recognises trading of are being encouraged to pool resources from other power as a distinct activity and permits SERCs to schemes under the Minimum Need Programme allow open access in distribution of electricity in (MNP) and Rural Infrastructure Development Fund phases that would ultimately encourage efficiency (RIDF) to meet the objective of 100 per cent and competition.

7 Electrification. A new scheme called Accelerated Rural Electrification Programme (AREP), with These reforms have to be carried forward provision for interest subsidy, is being launched. aggressively to improve the financial health of the The participation of decentralised power producers SEBs. The issue of one-time settlement of dues will be encouraged, especially for electrification of payable by SEBs to central power utilities (CPUs) remote villages. Village-level organisations like has been addressed by securitising the dues. It is panchayat raj institutions (PRIs), rural cooperatives likely to facilitate further reforms in the sector. and non-government organisations (NGOs) will play Reforms in the distribution sector have been a crucial role in the rural electrification programme.

8 Identified as the key area of reform. The Accelerated Community participation is essential for success of Power Development Programme (APDP) was the programme. initiated in 2000-01 in order to give a fillip to the reform process in the power sector. One of the main The restructuring of the existing renewable strategies identified in this regard is the energy programmes towards gradual development of distribution plans/projects for all commercialisation as initiated during the Ninth Plan distribution circles as centres of excellence that would be continued during the Tenth Plan period. can be replicated by the states in the later phase In this context, a draft Renewable Energy Policy of distribution reforms.

9 Sixty-three such circles have formulated by the Ministry of Non-Conventional been taken up initially under APDP funding, which Sources of Energy is under the consideration of envisages metering of 11 KiloVolt (KV) feeders, the Cabinet. improvement/strengthening of sub-transmission and distribution network, 100 per cent metering, Private sector investments in renewable establishment of a management information system energy sources are to be encouraged by promoting (MIS) to improve billing, collection etc. a bidding process for available subsidies. The contracts should be awarded to private To ensure better utilisation of funds for entrepreneurs who provide the maximum benefit reforms, an Accelerated Power Development and with the lowest amount of subsidies.

10 Reforms Programme (APDRP) has been formulated by making certain modifications in the POWER SECTOR REFORMS. APDP scheme. It is aimed at promoting investment for distribution reforms. The funding under APDRP. is proposed to be 50 per cent on investment stream Apart from envisaging the setting up of and 50 per cent on incentive stream. The focus is the CERC, the Common Minimum Plan to ensure that investment must result in quantifiable formulated at the Chief Minister's conference in physical and financial benefits in the selected December 1996 also accepted the need for circles. rationalisation of tariffs so that subsidised sectors like agriculture would pay at least 50 per Out of the estimated 80,000 villages yet to cent of the average cost of supply within three be electrified, the Tenth Plan proposes to electrify years.

ON OCCUPATIONAL SAFETY AND HEALTH 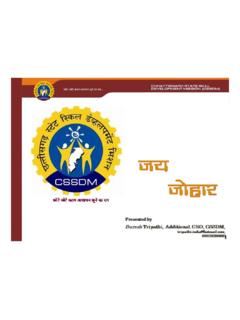 CHHATTISGARH STATE SKILL DEVELOPMENT MISSION Collectors have given responsibilities for implementation & monitoring of CSSDM activities at the districts.

A Study on Child Labour with Special reference to … Important Issues on Ageing in India …

By 2020, it is projected that three-quarters of all deaths in developing countries could be ageing-related . 16 % of the world’s elderly population will be in India. 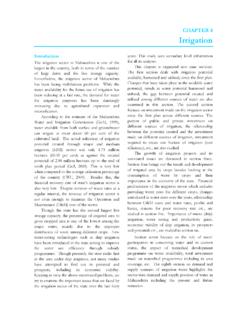 CHAPTER 4 Irrigation Introduction The irrigation sector in Maharashtra is one of the largest in the country, both in terms of the number of large dams and the live storage capacity. 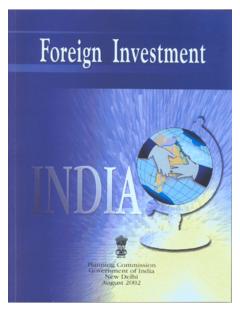 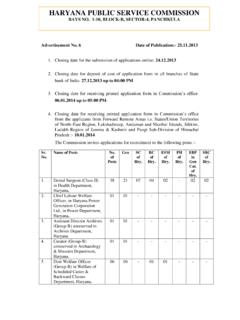 © BRIDGE TO INDIA, 2017 14 Policy update Renewable purchase obligation (RPO) In line with the 8% solar RPO target for the country for March 2022, MNRE has At Techno, our emphasis on niche business opportunities and fostering relationships with industry bellwethers will pave the way for our level-next