pain 94 (2001) 149 158. Clinical importance of changes in chronic pain intensity measured on an 11-point numerical pain rating scale John T. Farrar a,*, James P. Young Jr. b, Linda LaMoreaux b, John L. Werth b, R. Michael Poole b a Department of Biostatistics and Epidemiology, University of Pennsylvania School of Medicine, Blockley Hall, Room 816, 423 Guardian Drive, Philadelphia, PA 19104, USA. b Pfizer Global Research and Development, Ann Arbor Laboratories, Ann Arbor, MI, USA. Received 26 January 2001; received in revised form 16 April 2001; accepted 18 May 2001. Abstract pain intensity is frequently measured on an 11-point pain intensity numerical rating scale (PI-NRS), where 0 no pain and 10 worst possible pain . However, it is difficult to interpret the Clinical importance of changes from baseline on this scale (such as a 1- or 2-point change). To date, there are no data driven estimates for clinically important differences in pain intensity scales used for chronic pain studies.

1 pain 94 (2001) 149 158. Clinical importance of changes in chronic pain intensity measured on an 11-point numerical pain rating scale John T. Farrar a,*, James P. Young Jr. b, Linda LaMoreaux b, John L. Werth b, R. Michael Poole b a Department of Biostatistics and Epidemiology, University of Pennsylvania School of Medicine, Blockley Hall, Room 816, 423 Guardian Drive, Philadelphia, PA 19104, USA. b Pfizer Global Research and Development, Ann Arbor Laboratories, Ann Arbor, MI, USA. Received 26 January 2001; received in revised form 16 April 2001; accepted 18 May 2001. Abstract pain intensity is frequently measured on an 11-point pain intensity numerical rating scale (PI-NRS), where 0 no pain and 10 worst possible pain . However, it is difficult to interpret the Clinical importance of changes from baseline on this scale (such as a 1- or 2-point change). To date, there are no data driven estimates for clinically important differences in pain intensity scales used for chronic pain studies.

2 We have estimated a clinically important difference on this scale by relating it to global assessments of change in multiple studies of chronic pain . Data on 2724 subjects from 10 recently completed placebo-controlled Clinical trials of pregabalin in diabetic neuropathy, postherpetic neuralgia, chronic low back pain , fibromyalgia, and osteoarthritis were used. The studies had similar designs and measurement instruments, including the PI-NRS, collected in a daily diary, and the standard seven-point patient global impression of change (PGIC), collected at the endpoint. The changes in the PI-NRS from baseline to the endpoint were compared to the PGIC for each subject. Categories of much improved' and very much improved' were used as determinants of a clinically important difference and the relationship to the PI-NRS was explored using graphs, box plots, and sensitivity/specificity analyses. A consistent relationship between the change in PI-NRS and the PGIC.

3 Was demonstrated regardless of study, disease type, age, sex, study result, or treatment group. On average, a reduction of approximately two points or a reduction of approximately 30% in the PI-NRS represented a clinically important difference. The relationship between percent change and the PGIC was also consistent regardless of baseline pain , while higher baseline scores required larger raw changes to represent a clinically important difference. The application of these results to future studies may provide a standard definition of clinically important improvement in Clinical trials of chronic pain therapies. Use of a standard outcome across chronic pain studies would greatly enhance the comparability, validity, and Clinical applicability of these studies. q 2001 International Association for the Study of pain . Published by Elsevier Science All rights reserved. Keywords: Analgesics; Human; Numeric rating scale ; pain measurement; Clinical trials; Treatment outcome 1.

4 Introduction (Turk et al., 1993). To compensate for this variability, measures of improvement usually adjust for the individual's The primary goal of any Clinical trial is to evaluate the baseline by calculating raw change or percent change. Even potential beneficial effect of a therapy. Statistically signifi- so, without additional data it is difficult to evaluate the cant results are necessary but not sufficient to show a differ- Clinical importance of a numeric change, such as a 1- or ence in effect between the two study groups. The Clinical 2-point decrease on a 0 10-point scale . importance of the effect must also be demonstrated to make Since the NRS is a standard instrument in chronic pain the results of the trial relevant to patient care. However, studies, it has become important to define the level of because of the subjective nature of pain , Clinical importance change that best represents a clinically important improve- is not always easy to determine (Farrar et al.)

6 Medication. At the endpoint of each study, patients A series of ten recently completed studies of pregabalin completed the PGIC. In addition, the physician completed treatment for chronic pain provided an appropriate set of a Clinical global impression of change (CGIC). The relation- data for such an analysis. The studies used a common design ship between the PGIC and CGIC was examined using the with identical pain measures and covered a wide range of Spearman rank correlation coefficient. indications in both neuropathic and non-neuropathic chronic For each patient, we computed the raw change in the PI- pain , with a total enrollment of 2879 patients. In this paper, NRS score by subtracting the baseline from the endpoint. we present an analysis to determine the change in a pain Patients were stratified by the PGIC categories, and the intensity numeric rating scale (PI-NRS) that is most closely mean raw change and percent change (raw change/.)

7 Associated with improvement on the commonly used and baseline 100) were calculated within each stratum by validated measure of the patient's global impression of study. Since few patients chose very much worse' or change (PGIC). This value should be useful in designing much worse' on the PGIC, these categories were combined future studies and the determination of appropriate sample for our analysis. The same analyses were repeated sepa- sizes. Such information also will facilitate the comparison rately comparing patients who received placebo to those of results across studies and help in determining the value of who received active drug, males and females, patients in a therapy in Clinical practice. different age groups (18 49, 50 59, 60 69, 70 1 ), and patients with different baseline pain scores. In addition, descriptive statistics were calculated within each stratum 2. Methods for all patients combined. To better characterize the association between specific We examined the data for all patients enrolled in 10 PI-NRS change scores and clinically important improve- double-blind, placebo-controlled, parallel, multi-center ment, the sensitivity and specificity were calculated and chronic pain studies that utilized the same study design receiver operating characteristic (ROC) curves were derived and procedures.

8 Outcome measures included a 0 10 PI- using logistic regression analyses (Hanley, 1989). For each NRS as in Fig. 1A, and a PGIC scale , a 7-point categorical analysis, Clinical importance served as the dependent vari- scale , as in Fig. 1B. Throughout each study, patients kept a able and either the raw or percent change scores served as daily diary in which they circled the number from 0 no the independent variable. Our a priori definition of Clinical pain ' to 10 worst possible pain ' that best described their importance was the PGIC category of much improved' or pain over the preceding 24 h. The baseline score was better. However, since this definition is arbitrary, we also computed as the mean of the seven diary entries prior to calculated the PI-NRS changes best associated with mini- taking study medication and the endpoint score was the mally improved' or better, and very much improved' alone. Fig. 1. (A) PI-NRS; Daily pain Diary. (B) PGIC which was completed at study end.

9 Farrar et al. / pain 94 (2001) 149 158 151. ROC curves simultaneously describe the sensitivity and Patients from all treatment groups, including placebo, specificity of a predictive measure as different cutoff values were combined for each of the 10 studies presented in are applied. In this case, the ROC curve describes the sensi- Figs. 2 and 3. For all 10 studies, a similar relationship was tivity and specificity of particular change (raw or percent observed between the change in PI-NRS and each PGIC. change) values in predicting each definition of Clinical category. Fig. 2 shows that, on average, decreases from importance . Values for the PI-NRS changes that were best baseline of two or more units were associated with the associated with each of the categories were generated from PGIC category of much improved', while decreases of at the ROC curves, assuming equal importance of sensitivity least four units generally corresponded to very much and specificity.

10 The value is defined by the intersection of a improved'. Fig. 3 shows the same relationship for the 458 tangent line with each ROC curve, which is mathema- percent change in PI-NRS, with an association of changes tically equivalent to choosing the point at which sensitivity of 30 and 50%, respectively. These associations, as and specificity are the closest to being equal. The area under measured by either raw or percent change, held across all the ROC curve, reported as the c-statistic from the logistic ten studies regardless of differences in disease model, trial regression, represents the total overall association between duration, and patient demographic characteristics. In addi- the PI-NRS and PGIC category used to construct the specific tion, the relationship was consistent whether or not the drug curve. was shown to be effective in a particular trial. Active vs. placebo treatment 3. Results Fig. 4 displays the same data comparing active vs. 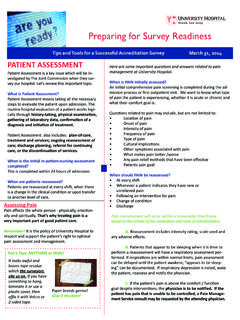 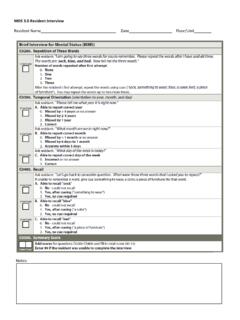 Pain Assessment Interview J0300. Pain Presence Ask resident 'Have you had pain or hurtlng at any time in the last S days?" O. No—ySkipto JI 100, Shoness of Breath