Clip Chart A Simple Discipline Strategy for Promoting Positive Behavior I got from my son’s third grade teacher, a truly gifted man by the name of Jonathan McDade.

3 It's a wonderfully simple strategy that I was able to use in my own classroom with great success. And now that I'm no longer in the classroom I resigned from my school district this past June after thirty-one years of teaching and three years of a leave of absence I've been sharing this same strategy as a part of the discipline seminar I present at schools and districts. Lately, though, I've received a number of email requests about the idea from teachers who had heard about it from another teacher and were looking for a bit more information about how it all works. Thus, this eBook. By the way: If you find yourself working with a tough group of students, , lots of negative behavior and aggressive limit testers , you shouldn't start out using the Clip Chart .

4 What you're going to need is a strategy that enables you to easily identify and document problem behavior so that you can begin to deal with it. For those TIP situations, I suggest you try the Behavior CODES strategy. It's contained in my book, Eight Great Ideas. Then, after you've been able to steer them all in a better direction, you could easily switch over to the Clip Chart . To this day, I can still remember the morning I walked into Mr. McDade's classroom to hang out for a while and spend a bit of one-on-one time with some of his students. As I wandered around the room, I came upon a multi-colored Chart .

5 About a foot wide and maybe four feet long, it was hanging on the wall at the front of the room. The whole thing was made from construction paper that had then been laminated. Attached to the Chart were wooden clothespins. Each clothespin had the name of a student written on it. In his must-read book, Setting Limits in the Classroom, Robert MacKenzie states that most misbehavior in the class- room is just limit testing. He also points out that some students are more aggressive testers than others. Clip Chart : A Simple Discipline Strategy for Promoting Positive Behavior 2. It took me all of five seconds to realize the bril- liance of his idea.

6 The clothespins started out the day clipped to the middle of the Chart . Yes, of course. Now that I see it, it makes so much more sense. (I'll expand on this thought in just a bit.). The Big Picture Clip Chart the name I've come to call it; you can call it whatever you wish consists of just two items. 1. A laminated strip of paper that has been divided into seven levels. As you can see, each level has been labeled. Outstanding is at the top of the Chart and Parent Contact resides at the bottom. 2. A set of clothespins with the name of a student written on each one. The clothespins are clipped to the left and right edges of the Ready to Learn level of the Chart .

7 During the course of the day, the clothespins move up and down the Chart based upon the behavioral choices each student makes. Good behavior causes the clothespin to move up one level. Conversely, inappropriate behavior will cause the clothespin to move down one level. What could be easier? Clip Chart : A Simple Discipline Strategy for Promoting Positive Behavior 3. Teacher Somewhat mystified by my stance: Well, Rick. Since you asked, I'm going to say that the color-coded Pocket Chart we have in my room is pretty easy to use. Every student begins the day with a set of colored squares in his pocket.

8 We use the rainbow as our color guide so everyone's pocket starts off with the violet card on top. Whenever a child is not following one of our rules, I merely ask him to remove a card from his pocket. The first removal results in the blue card being visible. Subsequent removals go from green to yellow to orange, and finally, to red. At the end of the day, I have a student re- place all of the colored cards that had been tely, removed so that everyone once again starts n f o rtuna n the day with the violet card showing. U. c r e ated a ch this hi n m e n t in w ed enviro ers focus ir Hey, you're right.

9 That does sound easy. e teach rity of th ajo e the m tion on th So why the heck am I taking the time to produce atten of ation r. an eBook on the Clip Chart ? There's got to be a t i f i c iden avio reason. After all, it's not as if I'm sitting around g a t i v e beh ne Starbucks sipping a latte trying to think of some- thing to do with my day. The Clip Chart versus the Pocket Chart Inspired by the aforementioned Pocket Chart , the Clip Chart is a clever adaptation that has some real advantages over its predecessor. Advantage One As was just stated on the previous page, a student's clothespin travels up and down the Chart based upon his behavior.

10 If he's making good choices, it's going to be moving up. If not, it's going down. This up-and-down movement is a significant departure from the down-only style of the Pocket Chart . For the most part, the use of the Pocket Chart was limited to those times when the teacher asked that a student's card be removed for misbehavior. Unfortunately, this created an envi- ronment in which teachers focused the majority of their attention on the identification of negative behavior. Make a mistake, lose a card. Conversely, do a good job of being a respon- sible, hard-working student and I'm not going to do a thing.

FACT SHEET: A summary of the rights under the Convention on the Rights of the Child Article 1 (Definition of the child): The Convention … 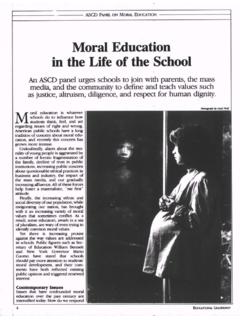 Moral Education in the Life of the School - ASCD

ASCD PANEL ON MORAL EDUCATION Moral Education in the Life of the School An ASCD panel urges schools to join with parents, the mass media, and the community to define and teach values such

Article 17 Article 24 Children have the right to good ...

Student discipline rights and procedures, GUIDE, Convention on the Rights of the Child, Training, Moral Education in the Life of, ASCD, SCHOOLS, Peel District School Board, Right