cocoa barometer 2018. Index 1 Introduction - 3. 2 Developments - 5. 3 Certification - 36. 4 Ensuring a Living Income - 43. 5 Transparency & Accountability - 55. 6 Conclusions & Key Recommendations - 60. cocoa barometer 2018. Antonie Fountain Friedel Huetz-Adams 2. Supply chain smallholder trader / grinder manufacturer retail consumer beans powder liquor butter chocolate products Scope and intentions of the cocoa barometer 2018. The cocoa barometer 2018 provides an overview of the current sustainability developments in the cocoa sector, and highlights critical issues that are not receiving sufficient attention at present. It is an endeavour to stimulate and enable stakeholders to communicate and discuss these critical issues. The authors have chosen to focus on West Africa, because of its dominance in cocoa production and the significant challenges it faces.

The world market price for cocoa saw a steep decline between September 2016 and February 2017. Smallholder cocoa farmers, already struggling with poverty, saw their cocoa income decline by as much as 30%-40%

1 cocoa barometer 2018. Index 1 Introduction - 3. 2 Developments - 5. 3 Certification - 36. 4 Ensuring a Living Income - 43. 5 Transparency & Accountability - 55. 6 Conclusions & Key Recommendations - 60. cocoa barometer 2018. Antonie Fountain Friedel Huetz-Adams 2. Supply chain smallholder trader / grinder manufacturer retail consumer beans powder liquor butter chocolate products Scope and intentions of the cocoa barometer 2018. The cocoa barometer 2018 provides an overview of the current sustainability developments in the cocoa sector, and highlights critical issues that are not receiving sufficient attention at present. It is an endeavour to stimulate and enable stakeholders to communicate and discuss these critical issues. The authors have chosen to focus on West Africa, because of its dominance in cocoa production and the significant challenges it faces.

2 The two special thematic focus points of this barometer are Ensuring a Living Income and Transparency and Accountability . 1. Introduction The world market price for cocoa saw a steep decline between September 3. 2016 and February 2017. Smallholder cocoa farmers, already struggling with poverty, saw their cocoa income decline by as much as 30%-40%. within a couple of months, with the exception of Ghana, where the government is subsidising the cocoa price indirectly. Though prices are presently climbing again, farmers bear the risks of a volatile price, and there is no concerted effort by industry or governments to alleviate even a part of the burden of this income shock. The price collapse is directly linked to a strong increase of cocoa production in the past years, partly driven by new production areas set up at the expense of native forests.

3 This can be equally attributed to corporate disinterest in the environmental effects of the supply of cheap cocoa , and to an almost completely absent government enforcement of environmentally protected areas. More than ninety per cent of West Africa's original forests are gone. Child labour remains at very high levels in the cocoa sector, with an estimated million children working in cocoa fields in the Ivory Coast and Ghana alone. Child labour is due to a combination of root causes, including structural poverty, increased cocoa production, and a lack of schools and other infrastructure. Not a single company or government is anywhere near reaching the sector-wide objective of the elimination of child labour, and not even near their commitments of a 70% reduction of child labour by 2020. Sector-wide efforts to improve the lives of farmers, communities and the environment are having little impact; the scope of proposed solutions is not even in the ballpark of addressing the scope of the problem.

4 While many of the current programs in cocoa focus on technical solutions around improving farming practices, the underlying problems at the root of the issues deal with power and political economy; how the market defines price, the lack of bargaining power farmers, market concentration of multinationals, and a lack of transparency and accountability of both governments and companies. The previous two Barometers were instrumental in kick-starting the conversation on farmer livelihoods. Now that a living income is seen as a keystone for the cocoa sector, this barometer goes in depth into how this could be achieved, in the focus area Ensuring a Living Income . 4. In addition, cocoa farming needs to see a viable local infrastructure, including schools, health care, and access to markets. There is a key role for both companies and specifically governments to play on that level.

5 The second focus area on Transparency and Accountability takes a deeper look into the prerequisites for this. Production / Consumption cocoa Production in 1,000 tonnes 2017/18. Domestic consumption in 1,000 tonnes 2015/16. Source: ICCO 2018, Table 2, 40. 351. 732 176. Rest of Europe Asia 82 Japan US Africa 154 46 China 333. India Brasil Rest of 189. Americas 900 618. C te Ghana Rest of 88. d'Ivoire Africa 280 Rest of Asia Indonesia 317 165 270. Rest Brasil Ecuador 76. Australia 2. Developments 5. Developments 6 Scale of efforts vs. scale of problem One of the painful questions the cocoa sector has to ask itself is whether the sustainability efforts made in the past decade have led to actual impact. An even more painful question is, whether the scope of solutions is even in the ballpark of the scope of the problem. All indicators point to a lack of sector-wide ambition, and therefore a lack of urgency.

6 If the cocoa sector continues with business as usual, it will be decades if ever before human rights are respected and the environment is protected. Scale of solutions vs. problem Number of children Number of children in 18%. in cocoa in West Africa: ICI CLMRS ambition for 2020: 400,000. (Source ICI). 15%. Number of farmers in Number of farmers in C te d'Iv ire and Ghana: cocoa Action ambition for 2020: 300,000. (Source cocoa Action). Living income: Current farmer income: 31%. $ (Source Fairtrade). Price Decline The world market price for cocoa saw a steep fall between September 2016 and February 2017. More than a third of its value was wiped out, with a tonne of cocoa going from above US$3,000 to below US$1,900. in a matter of months. Despite various voices warning that a focus on production increase policies would lead to a price collapse*, most 7.

7 Companies and governments were not prepared when it happened. World Market Price and Farm Gate Price The World Market Price for cocoa is published daily as a calculated average of the price for cocoa futures at the London and New York commodity exchanges. The prices at these exchanges are affected by different variables: the relationship between demand, stocks, and current and future supply. Traders pay slightly different prices for cocoa from different countries due to requirements concerning quality and delivery date. The Farm Gate Price is the price the farmer receives for his/her cocoa . In most cocoa producing countries, fluctuations in the world market price have an immediate influence on the farm gate price. However, the situation in C te d'Iv ire and Ghana is different. Both countries have national cocoa marketing boards that pre-sell part of their harvest in the year before the harvest season starts.

8 The marketing boards (the Conseil du Caf -Cacao or CCC, in C te d'Iv ire, and the COCOBOD in Ghana) then determine a fixed price around the 1st of October of each year, the beginning of the annual main-crop season. In C te d'Iv ire, the farm gate price is fixed at around 60% of the value at which the CCC has been able to make these pre-sales. After last year's price decline, the CCC slashed farm gate prices by 36% at the mid-crop pricing in April 2017. In Ghana, the price is also more or less a percentage of the world market price (according to the COCOBOD, around 70%; in reality usually significantly lower). However, after the price collapse, COCOBOD has maintained the pre-collapse prices. It is still not clear * As we wrote in the 2015 cocoa barometer , the present [industry] focus on increasing farm productivity [could] lead to an oversupply of cocoa and to decreasing prices.

9 At the 2014 World cocoa Conference in Amsterdam, the Executive Director of the ICCO claimed that if governments were to stick to their production increase policies, the global cocoa price would collapse. how long the COCOBOD will be able to maintain this higher level. Due to high inflation in Ghana, though, the real price paid for cocoa at the farm gate has decreased significantly since the price decline. 8. Oversupply Drives Prices Down At the beginning of the 2016/17 season, reports of a good harvest caused market participants to expect a world market price decrease, from just over US$3,000 to at worst $2,600 per tonne. But the cocoa price went down much further within months, to below US$2,000. The 2015/16 season had led to a global supply deficit, reducing global stocks to the lowest levels since 1985. After the 2016/17 season, the situation changed; now there is a structural oversupply that could last for years to At the beginning of the crisis, it can be argued that problems were aggravated by mistakes of the cocoa authorities in the world's largest cocoa producer, C te d'Iv ire (see box below).

10 The speed of the price decline can be partially explained through some speculators panicking and selling their cocoa investments, further destabilising the market. The increasing use of algorithms being used by speculators at the stock market2 has also caused a significant increase of the speed of speculation, which is likely to have contributed to the speed of the decline. Since the collapse, cocoa has been steadily trading around the US$2,000. mark, with an upturn starting in February 2018 based on revised forecasts; the oversupply in the ongoing harvesting season might be less high than expected. Possible Causes of Increased Production Global production of cocoa has risen significantly in the previous years. Ivorian cocoa production alone in 2016/2017 was 600,000 tonnes higher than just three years before (a 40% increase at the country level, amounting to 15% of total global production)3. 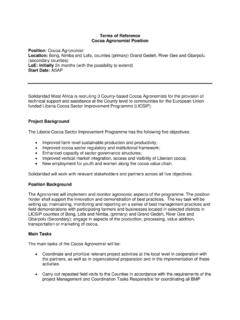 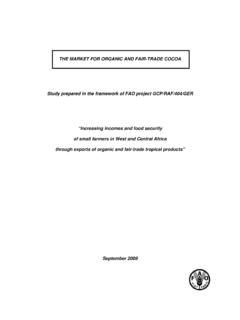 THE MARKET FOR ORGANIC AND FAIR-TRADE …

3 1. THE WORLD MARKET FOR COCOA 1.1. OVERVIEW According to FAO, worldwide imports of cocoa beans, processed cocoa products and products containing 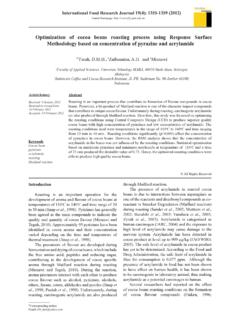 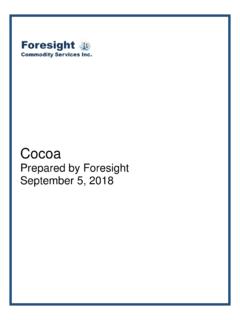 • Cocoa arrivals at ports in Ivory Coast were seen at around 1,821 thousand tonnes between October 1 and July 29, down 6.5 percent from 1,951 thousand in the same

The State of Sustainable Markets 2017 - ITC

THE STATE OF SUSTAINABLE MARKETS 2017 ii Foreword from ITC A growing world population, with its accompanying increase in the demand for food, is only heightened by 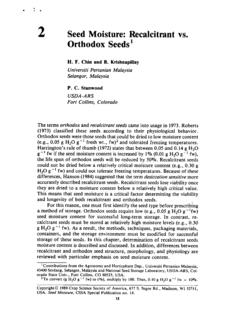 RECALCITRANT AND ORTHODOX SEEDS 17 shape and size of cotyledons and the embryonic attachment compared to bean (Phaseolus vulgaris L.), a typical example of an orthodox seed. Moisture Content of Recalcitrant and Orthodox Seeds