Benefits / erisa . Compensation & Benefits Review Selecting Benchmarking Services to 42(6) 470 476. 2010 SAGE Publications Reprints and permission: http://www. Help Meet Fiduciary Requirements DOI: Marcia S. Wagner, Esq., Managing Director, The Wagner Law Group Abstract Under the Employee Retirement Income Security Act ( erisa ) of 1974, employers and other plan fiduciaries have a duty to ensure that all fees paid by the plan to its service providers are reasonable. Unfortunately, many plan sponsors are not equipped with the necessary expertise and resources to determine the reasonableness of the plan's fees .

472 Compensation & Benefits Review 42(6) also confirm that any and all fees paid with plan assets are reasonable, and the employer must make this determina-tion with the same standard that would be required of a

1 Benefits / erisa . Compensation & Benefits Review Selecting Benchmarking Services to 42(6) 470 476. 2010 SAGE Publications Reprints and permission: http://www. Help Meet Fiduciary Requirements DOI: Marcia S. Wagner, Esq., Managing Director, The Wagner Law Group Abstract Under the Employee Retirement Income Security Act ( erisa ) of 1974, employers and other plan fiduciaries have a duty to ensure that all fees paid by the plan to its service providers are reasonable. Unfortunately, many plan sponsors are not equipped with the necessary expertise and resources to determine the reasonableness of the plan's fees .

2 This creates a serious problem for plan fiduciaries. A mounting number of lawsuits have been filed against employers on the grounds that plan fees are excessive. Although the current legal climate surrounding the 401(k) plan industry is litigious, plan fiduciaries must follow three primary rules to ensure fees paid to service providers are reasonable. Through benchmarking fees , plan fiduciaries can meet critical requirements under erisa ; however, fiduciaries need to select a reliable benchmarking service. Financial advisors can play a pivotal role in helping the plan sponsor incorporate these services into a prudent plan Review process that is intended to satisfy the requirements of erisa .

3 Keywords benchmarking, prudent Review process, prudent expert, hidden fees , fiduciaries 401(k) Plan Legal Climate received by the plan in return, whereas other services strictly assess fees . In addition to varying considerably in Many employers who sponsor 401(k) plans and other scope, cost and quality, other factors such as timeliness of defined contribution plans are increasingly aware that they data, size of the database, method of data verification and face a daunting challenge under the Employee Retirement construction of benchmark groups can also vary from one Income Security Act ( erisa ) of 1974.

4 Service fees in the service provider to another. 401(k) plan industry are undergoing constant scrutiny by regulators, Congress, the plaintiffs' bar and the Depart- ment of Labor (DOL). The 401(k) plan industry has experi- erisa Requirements enced a recent explosion in fee litigation, involving Employers and other plan fiduciaries have a responsibility complaints that plan sponsors breached their fiduciary duties under erisa to ensure that all fees paid by the plan to its by authorizing the use of plan assets to pay excessive fees . service providers are reasonable.

5 However, employers and Furthermore, the DOL has launched a regulatory initia- other plan fiduciaries may lack the specialized knowledge tive to improve fee-related disclosures in defined contribu- of the 401(k) plan industry necessary to satisfy the require- tion plans. Meanwhile, Congress is proposing legislation ments under erisa . Benchmarking services are on the to uncover hidden plan fees , which is included the 401(k) rise and are proving to be an important tool in helping plan Fair Disclosure for Retirement Security Act and the fiduciaries mitigate legal liability risks.

6 Defined Contribution Fee Disclosure Act. To gain a full understanding of the value of bench- In hopes of resolving these issues, several firms are marking services, it is important to understand a plan now offering side-by-side comparisons of fees paid by fiduciary's responsibilities with respect to plan fees . erisa . individual plans against the fees paid by a representative imposes three sets of rules requiring plan fiduciaries to benchmark group of plans. Benchmarking services ulti- mately serve to benefit plan participants and minimizes Corresponding Author: fiduciary liability risk for the plan sponsor.

7 Benchmark- Marcia S. Wagner, The Wagner Law Group, 13th Floor, 99 Summer ing services run the gamut of being highly ambitious and Street, Boston, MA 02110, USA. attempting to gauge not only plan fees but also the value Email: Wagner 471. ensure that any fees paid by the plan to its service pro- for plan operation and only if no more than reasonable viders are reasonable: Compensation is paid for them. The applicable DOL reg- ulations simply state that the determination of whether 1. Establishment of Trust rules under erisa Compensation is reasonable depends on the particular Section 403 facts and circumstances of each case.

8 2. Prudent Man standard of care under erisa The DOL proposed new regulations under erisa . Section 404 Section 408(b)(2) in 2007, which would require service 3. The Prohibited Transaction (PT) exemption providers to disclose indirect Compensation and any con- under erisa Section 408(b)(2) flicts of interest to plan fiduciaries when contracting for services. These regulations are scheduled to become final- ized later this year. The DOL released an interim final Establishment of Trust Rules regulation in July 2010. However, these rules would not Under erisa Section 403, the Establishment of Trust affect a fiduciary's substantive duty to limit the plan fees rules specifically require plan assets to be held in a quali- paid to no more than reasonable Compensation .

9 Fying trust for the exclusive purposes of providing ben- efits and defraying reasonable expenses of administering the plan. Penalties for Breaching Duties Under erisa , the employer could face substantial penal- ties for breaching any of its fiduciary A growing Prudent Man Standard of Care number of lawsuits have already been filed against some of Plan fiduciaries are required to exhibit the same level of the nation's largest employers and investment providers, expertise a prudent expert would in assessing the reason- alleging, in part, that they breached their fiduciary duties ableness of plan fees .

10 Similar to erisa Section 403, the under erisa by failing to monitor the direct and indirect Prudent Man standard of care similarly permits reason- Compensation paid to the plan's service able expenses to be defrayed with plan assets. To make One notable fact is that trial courts have generally things even more challenging, the Prudent Man standard been cautious in dismissing these lawsuits at an early stage, of care presents a twist. erisa Section 404 is also known which seems to have resulted in encouraging the plain- as the prudent expert standard because it requires fidu- tiffs' bar to file additional lawsuits over Further- ciaries to discharge their duties to the plan with the care, more, erisa Section 502(a) gives the plan participants skill, prudence and diligence that a prudent man acting the power to file legal claims against a plan fiduciary for in a like capacity and familiar with such matters would breaching its duties. 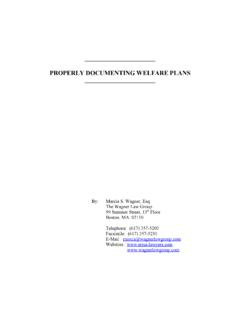 Properly Documenting Welfare Plans Since the passage of the Employee Retirement Income Security Act of 1974 (“ERISA”), most of the attention has been focused on compliance issues related to 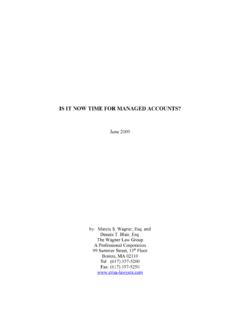 IS IT NOW TIME FOR MANAGED ACCOUNTS? - erisa …

Section 2 TAXATION OF DEFERRED COMPENSATION: OVERVIEW OF 409A AND 457 Marcia S. Wagner, Esq. The Wagner Law Group, Boston I. SCOPE NOTE This article provides an overview of the treatment of nonqualified

WHO IS A FIDUCIARY? - Wagner Law Group

e.g., the plan’s recordkeeper or other third party administrator, for performing services that the mutual fund might otherwise be required to perform.

Mutual, Fiduciary, Who is a fiduciary

FINAL REGULATIONS UNDER SECTION 403(b) OF THE INTERNAL REVENUE CODE On July 26, 2007, the Internal Revenue Service published its long-awaited final