Comprehensive Experimental Analyses of Automotive Attack Surfaces Stephen Checkoway, Damon McCoy, Brian Kantor, Danny Anderson, Hovav Shacham, and Stefan Savage University of California, San Diego Karl Koscher, Alexei Czeskis, Franziska Roesner, and Tadayoshi Kohno University of Washington Abstract This situation suggests a significant gap in knowledge, Modern automobiles are pervasively computerized, and and one with considerable practical import. To what ex- hence potentially vulnerable to attack. However, while tent are external attacks possible, to what extent are they previous research has shown that the internal networks practical, and what vectors represent the greatest risks? within some modern cars are insecure, the associated Is the etiology of such vulnerabilities the same as for threat model requiring prior physical access has desktop software and can we think of defense in the same justifiably been viewed as unrealistic.

1 Comprehensive Experimental Analyses of Automotive Attack Surfaces Stephen Checkoway, Damon McCoy, Brian Kantor, Danny Anderson, Hovav Shacham, and Stefan Savage University of California, San Diego Karl Koscher, Alexei Czeskis, Franziska Roesner, and Tadayoshi Kohno University of Washington Abstract This situation suggests a significant gap in knowledge, Modern automobiles are pervasively computerized, and and one with considerable practical import. To what ex- hence potentially vulnerable to attack. However, while tent are external attacks possible, to what extent are they previous research has shown that the internal networks practical, and what vectors represent the greatest risks? within some modern cars are insecure, the associated Is the etiology of such vulnerabilities the same as for threat model requiring prior physical access has desktop software and can we think of defense in the same justifiably been viewed as unrealistic.

2 Thus, it remains an manner? Our research seeks to fill this knowledge gap open question if automobiles can also be susceptible to through a systematic and empirical analysis of the remote remote compromise. Our work seeks to put this question attack surface of late model mass-production sedan. to rest by systematically analyzing the external attack We make four principal contributions: surface of a modern automobile. We discover that remote Threat model characterization. We systematically exploitation is feasible via a broad range of attack vectors synthesize a set of possible external attack vectors as (including mechanics tools, CD players, Bluetooth and a function of the attacker's ability to deliver malicious cellular radio), and further, that wireless communications input via particular modalities: indirect physical access, channels allow long distance vehicle control, location short-range wireless access, and long-range wireless tracking, in-cabin audio exfiltration and theft.

3 Finally, we access. Within each of these categories, we characterize discuss the structural characteristics of the automotive the attack surface exposed in current automobiles and ecosystem that give rise to such problems and highlight their surprisingly large set of I/O channels. the practical challenges in mitigating them. Vulnerability analysis. For each access vector category, we investigate one or more concrete examples in depth 1 Introduction and assess the level of actual exposure. In each case we Modern cars are controlled by complex distributed com- find the existence of practically exploitable vulnerabilities puter systems comprising millions of lines of code execut- that permit arbitrary automotive control without requiring ing on tens of heterogeneous processors with rich connec- direct physical access. Among these, we demonstrate the tivity provided by internal networks ( , CAN).

4 While ability to compromise a car via vulnerable diagnostics this structure has offered significant benefits to efficiency, equipment widely used by mechanics, through the media safety and cost, it has also created the opportunity for new player via inadvertent playing of a specially modified attacks. For example, in previous work we demonstrated song in WMA format, via vulnerabilities in hands-free that an attacker connected to a car's internal network can Bluetooth functionality and, finally, by calling the car's circumvent all computer control systems, including safety cellular modem and playing a carefully crafted audio critical elements such as the brakes and engine [14]. signal encoding both an exploit and a bootstrap loader However, the threat model underlying past work for additional remote-control functionality. (including our own) has been met with significant, and Threat assessment.

5 From these uncovered vulnerabili- justifiable, criticism ( , [1, 3, 16]). In particular, it is ties, we consider the question of utility to an attacker: widely felt that presupposing an attacker's ability to physi- what capabilities does the vulnerability enable? Unique cally connect to a car's internal computer network may be to this work, we study how an attacker might leverage a unrealistic. Moreover, it is often pointed out that attackers car's external interfaces for post-compromise control. We with physical access can easily mount non-computerized demonstrate multiple post-compromise control channels attacks as well ( , cutting the brake lines). (including TPMS wireless signals and FM radio), inter- active remote control via the Internet and real-time data tion of how an adversary might be able to access a car's exfiltration of position, speed and surreptitious streaming internal bus (and thus compromise its ECUs) absent direct of cabin audio ( , anything being said in the vehicle) to physical access, a question that we answer in this paper.

6 An outside recipient. Finally, we also explore potential at- About the latter question understanding the external tack scenarios and gauge whether these threats are purely attack surface of modern vehicles there has been conceptual or whether there are plausible motives that far less research work. Among the exceptions is Rouf transform them into actual risks. In particular, we demon- et al.'s recent analysis of the wireless Tire Pressure strate complete capabilities for both theft and surveillance. Monitoring System (TPMS) in a modern vehicle [22]. Synthesis. On reflection, we noted that the vulnera- While their work was primarily focused on the privacy bilities we uncovered have surprising similarities. We implications of TPMS broadcasts, they also described believe that these are not mere coincidences, but that methods for manipulating drivers by spoofing erroneous many of these security problems arise, in part, from tire pressure readings and, most relevant to our work, systemic structural issues in the automotive ecosystem.

7 An experience in which they accidentally caused the Given these lessons, we make a set of concrete, pragmatic ECU managing TPMS data to stop functioning through recommendations which significantly raise the bar for wireless signals alone. Still others have focused on the automotive system security. These recommendations are computer security issues around car theft, including intended to bridge the gap until deeper architectural Francillon et al.'s recent demonstration of relay attacks redesign can be carried out. against keyless entry systems [9], and the many attacks on the RFID-based protocols used by engine immobi- 2 Background and Related Work lizers to identify the presence of a valid ignition key, Modern automobiles are controlled by a heterogeneous , [2, 6, 11]. Orthogonally, there has been work that combination of digital components.

8 These components, considers the future security issues (and expanded attack Electronic Control Units (ECUs), oversee a broad range surface) associated with proposed vehicle-to-vehicle of functionality, including the drivetrain, brakes, lighting, (V2V) systems (sometimes also called vehicular ad-hoc and entertainment. Indeed, very few operations are not networks, or VANETs) [4, 13, 21]. To the best of our mediated by computer control in a modern vehicle (with knowledge, however, we are the first to consider the full the parking brake and steering being the last holdouts, external attack surface of the contemporary automobile, though semi-automatic parallel parking capabilities are characterize the threat models under which this surface is available in some vehicles and full steer-by-wire has been exposed, and experimentally demonstrate the practicality demonstrated in several concept cars).

9 Charette estimates of remote threats, remote control, and remote data that a modern luxury vehicle includes up to 70 distinct exfiltration. Our experience further gives us the vantage ECUs including tens of millions of lines of code [5]. In point to reflect on some of the ecosystem challenges that turn, ECUs are interconnected by common wired net- give rise to these problems and point the way forward works, usually a variant of the Controller Area Network to better secure the automotive platform in the future. (CAN) [12] or FlexRay bus [8]. This interconnection permits complex safety and convenience features such as 3 Automotive threat models pre-tensioning of seat-belts when a crash is predicted and While past work has illuminated specific classes of threats automatically varying radio volume as a function of speed. to automotive systems such as the technical security At the same time, this architecture provides a broad properties of their internal networks [14, 15, 24, 26, 27, internal attack surface since on a given bus each compo- 28] we believe that it is critical for future work to place nent has at least implicit access to every other component.

10 Specific threats and defenses in the context of the entire Indeed, several research groups have described how automotive platform. In this section, we aim to bootstrap this architecture might be exploited in the presence such a Comprehensive treatment by characterizing the of compromised components [15, 24, 26, 27, 28] or threat model for a modern automobile. Though we demonstrated such exploits by spoofing messages to present it first, our threat model is informed significantly isolated components in the lab [10]. Most recently, by the Experimental investigations we carried out, which our own group documented experiments on a complete are described in subsequent sections. automobile, demonstrating that if an adversary were In defining our threat model, we distinguish between able to communicate on one or more of a car's internal technical capabilities and operational capabilities.

Experimental Security Analysis of a Modern …

Overall, these trends suggest that a wide range of vectors will be available by which an attacker might compromise a component and gain access to internal vehicular networks— 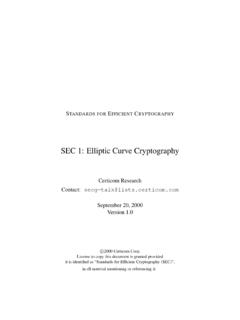 CRYPTOGRAPHY WHERE YOU NEED IT • Encrypts data at rest, providing an additional layer of protection to SAF tools by encrypting any type of field/ file level data directly on the mainframe • Encrypts data in process, providing security for data as it is being created by your applications [a PCI 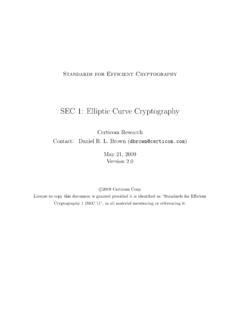 SEC 1 Ver. 2.0 1 Introduction This section gives an overview of this standard, its use, its aims, and its development. 1.1 Overview This document speciﬁes public-key cryptographic schemes based on elliptic curve cryptography 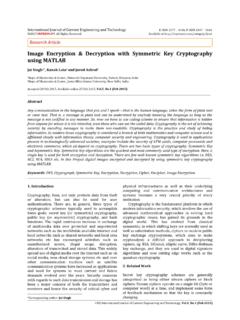 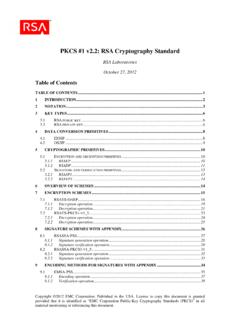 The CRT can be applied in a non-recursive as well as a recursive way. In this document a recursive approach following Garner’s algorithm [21] is used. 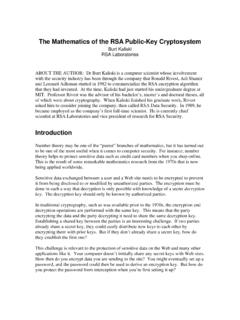 The Mathematics of the RSA Public-Key …

THE MATHEMATICS OF THE RSA PUBLIC-KEY CRYPTOSYSTEM Page 3 Prime Generation and Integer Factorization Two basic facts and one conjecture in number theory prepare the way for today’s RSA public-key cryptosystem.

Public, Mathematics, The mathematics of the rsa public 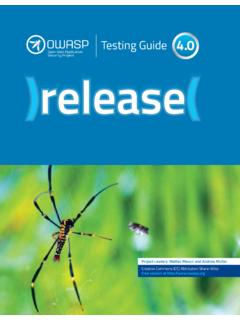