Consolidated financial statements What the Companies Act 2013 states EY insights Section 129(3) of the 2013 Act requires that a AS 21 does not mandate a company to present company having one or more subsidiaries will, in CFS. Rather, it merely states that if a company addition to separate financial statements , prepare presents CFS for complying with the CFS. Hence, the 2013 Act requires all companies, requirements of any statute or otherwise, it including non-listed and private companies, should prepare and present CFS in accordance having subsidiaries to prepare CFS. with AS 21. Keeping this in view and proviso to the rule 6, can a company having subsidiary take The 2013 Act also provides the below: a view that it need not prepare CFS? CFS will be prepared in the same form This question is not relevant to listed companies, and manner as SFS of the parent since the listing agreement requires listed companies company. with subsidiaries to prepare CFS.

1 Consolidated financial statements What the Companies Act 2013 states EY insights Section 129(3) of the 2013 Act requires that a AS 21 does not mandate a company to present company having one or more subsidiaries will, in CFS. Rather, it merely states that if a company addition to separate financial statements , prepare presents CFS for complying with the CFS. Hence, the 2013 Act requires all companies, requirements of any statute or otherwise, it including non-listed and private companies, should prepare and present CFS in accordance having subsidiaries to prepare CFS. with AS 21. Keeping this in view and proviso to the rule 6, can a company having subsidiary take The 2013 Act also provides the below: a view that it need not prepare CFS? CFS will be prepared in the same form This question is not relevant to listed companies, and manner as SFS of the parent since the listing agreement requires listed companies company. with subsidiaries to prepare CFS.

2 This question is The Central Government may provide for the consolidation of accounts of therefore relevant from the perspective of a non-listed companies in such manner as may be company. prescribed. The requirements concerning preparation, Some argue that because neither AS 21 nor Schedule adoption and audit of financial statements III mandates preparation of CFS, the Accounts Rules will, mutatis mutandis, apply to CFS. have the effect of not requiring a CFS. Instead, a An explanation to section dealing with company should present statement containing preparation of CFS states that for the information, such as share inprofit/loss and net assets purposes of this sub-section, the word of each subsidiary, associate and joint ventures, as subsidiary includes associate company additional information in the Annual Report. Inthis and joint venture. view, the Accounts Rules would override the 2013. Act. If it was indeed the intention not to require CFS, While there is no change in section 129(3), rule 6 then it appears inconsistent with the requirement to under the Companies (Accounts) Rules 2014 present a statement containing information such as deals with the Manner of consolidation of share in profit/loss and net assets of each of the accounts.

3 It states that the consolidation of component in the group. financial statements of a company will be done in accordance with the provisions of Schedule III to Others argue that the requirement to prepare CFS is the Act and the applicable accounting standards. arising from the 2013 Act and the Accounts Rules/. The proviso to this rule states as below: accounting standards cannot override/ change that Provided that in case of a company requirement. To support this view, it is also being covered under sub-section (3) of section argued that the Accounts Rules refer to AS 21 for the 129 which is not required to prepare requirement concerning preparation of CFS and AS. Consolidated financial statements under 21, in turn, refers to the governing law which happens the Accounting Standards, it shall be to be the 2013 Act. Hence, the Accounts Rules/ AS. sufficient if the company complies with 21 also mandate preparation of CFS. According to the provisions on Consolidated financial supporters of this view, the proviso given in the statements provided in Schedule III of the Accounts Rules deals with specific exemptions in AS.

4 Act. 21 from consolidating certain subsidiaries which operate under severe long-term restrictions or are Given below is an overview of key requirements acquired and held exclusively with a view to its under the Schedule III concerning CFS: subsequent disposal in the near future. If this was Where a company is required to prepare indeed the intention, then the proviso appears to be CFS, it will mutatis mutandis follow the poorly drafted, because the exemption should not requirements of this Schedule as have been for preparing CFS, but for excluding applicable to a company in the certain subsidiaries in the CFS. preparation of balance sheet and statement of profit and loss. In our view, this is an area where the MCA/ ICAI need In CFS, the following will be disclosed by to provide guidance/ clarification. Until such guidance/. way of additional information: In respect of each subsidiary, clarifications are provided, our preferred approach is associate and joint venture, % of net to read the proviso mentioned above in a manner assets as % of Consolidated net that the Accounts Rules do not override the 2013 Act.

5 Assets. Hence, our preference is to apply the second view, In respect of each subsidiary, , all companies (listed and non-listed) having one associate and joint venture, % share or more subsidiary need to prepare CFS. in profit or loss as % of Consolidated profit or loss. Disclosures at (i) and (ii) IFRS exempts non-listed intermediate holding are further sub-categorized into companies from preparing CFS if certain Indian and foreign subsidiaries, conditions are fulfilled. Is there any such associates and joint ventures. exemption under the 2013 Act read with the For minority interest in all Accounts Rules? subsidiaries, % of net assets and %. share as in profit or loss as % of Attention is invited to discussion on the previous issue Consolidated net assets and regarding need to prepare CFS. As mentioned earlier, Consolidated profit or loss, separately. our preferred view is that all companies having one or All subsidiaries, associates and joint more subsidiary need to prepare CFS.

6 Under this ventures (both Indian or foreign) will be view, there is no exemption for non-listed intermediate covered under CFS. holding companies from preparing CFS. Hence, all A company will disclose list of companies having one or more subsidiaries need to subsidiaries, associates or joint ventures prepare CFS. which have not been Consolidated along with the reasons of non-consolidation. Currently, the listing agreement permits companies to prepare and submit Consolidated financial results/ financial statements in compliance with IFRS as issued by the IASB. For a company taking this option, there is no requirement to prepare CFS under Indian GAAP. Will this position continue under the 2013 Act? Attention is invited to discussion on the earlier issue regarding the requirement to prepare CFS. As mentioned earlier, our preferred view is that CFS is required for all companies having one or more subsidiary. The Accounts Rules are clear that consolidation of financial statements will be done in accordance with the provisions of Schedule III to the 2013 Act and the applicable accounting standards.

7 Hence, companies will have to mandatorily prepare Indian GAAP CFS, and may choose either to continue preparing IFRS CFS as additional information or discontinue preparing them. The ICAI has recently proposed a new roadmap for implementation of Ind-AS in India and submitted it to the MCA for its consideration. In accordance with the roadmap, companies meeting the criteria below will prepare their CFS in accordance with Ind-AS from accounting period beginning on or after 1 April 2016. Comparatives for the year ending 31 March2016 will also be in accordance with Ind-AS. Companies whose equity and/or debt securities are listed or are in the process of listing on any stock exchange in India or outside India Companies other than those covered in (a). above, havingnet worth of `500 crore or more Holding, subsidiary, joint venture or associate companies of companies covered under (a). or (b) above We recommend that the MCA should re-examine this issue and allow companies to voluntarily prepare CFS.

8 Under IASB IFRS instead of Indian GAAP. More than 100 countries around the world use IFRS, which is now effectively a gold standard. Therefore, it may be inappropriate to not accept IFRS CFS. We also recommend that when Ind-AS are notified for preparing CFS, they should be notified with no or very few changes from the IASB IFRS. An explanation to section 129(3) of the 2013 Act states that for the purpose of this sub-section, the word subsidiary includes associate company and joint venture. The meaning of this explanation is not clear. Does it mean that a company will need to prepare CFS even if it does not have any subsidiary but has an associate or joint venture? The following two views seem possible on this matter: One view is that under the notified AS, the application of equity method/proportionate consolidation to associate/ joint ventures is required only when a company has subsidiaries and prepares CFS. Moreover, the Accounts Rules clarify that CFS need to be prepared as per applicable accounting standards.

9 Hence, the proponents of this view argue that that a company is not required to prepare CFS if it does not have a subsidiary but has an associate or a joint venture. The second view is that the above explanation requires associates/joint ventures to be treated at par with subsidiary for deciding whether CFS needs to be prepared. Moreover, the 2013 Act decides the need to prepare CFS and the Accounts Rules are relevant only for the manner of consolidating entities identified as subsidiaries, associates and joint ventures. Hence, CFS is prepared when the company has an associate or joint venture, even though it does not have any subsidiary. The associate and joint venture are accounted for using the equity/proportionate consolidation method in the CFS. We understand that the MCA/ICAI may provide an appropriate guidance on this issue in the due course. Until such guidance is provided, from our perspective, the second view appears to be more logical reading of the explanation. 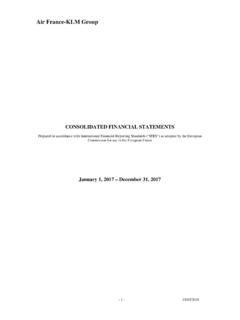 Consolidated Financial Statements of the Nestlé …