Constitution of the Republic of the - Burma Library

2 165. 12. Amendment of the Constitution .. 173. 13. State Flag, State Seal, National Anthem and the Capital .. 175. 14. Transitory Provisions .. 177. 15. General Provisions .. 179. Preamble Myanmar is a Nation with magnificent historical traditions. We, the National people, have been living in unity and oneness, setting up an independent sovereign State and standing tall with pride. Due to colonial intrusion, the Nation lost her sovereign power in 1885. The National people launched anti-colonialist struggles and National liberation struggles, with unity in strength, sacrificing lives and hence the Nation became an independent sovereign State again on 4th January 1948.

3 In order to gain independence speedily, the Constitution was hastily drafted, and it was adopted by the Constitutent Assembly on 24th September 1947. After attaining independence, Parliamentary Democracy System was practised in the State in accord with the Constitution of the Union of Myanmar. However, as democratic system could not be effectively materialized, the new Constitution of the Socialist Republic of the Union of Myanmar was drafted based on the single party system, and after holding a National Referendum, a socialist democratic State was set up in 1974.

4 The Constitution came to an end because of the general situation occurred in 1988. Later, due to public aspirations, the State Peace and Development Council made efforts to adopt multi-party democratic system and market economy in accord with the National situation. As an enduring Constitution , that guarantees long-term benefits, has become essential for the future nation, the State Peace and Development Council convened the National Convention in 1993. Persons who are well experienced in various aspects of politics, security, administration, economics, social and law as well as National races representatives of all townships in the Nation took part in the National Convention.

6 We, the National people, firmly resolve that we shall : - steadfastly adhere to the objectives of non-disintegration of the Union, non- disintegration of National solidarity, and perpetuation of sovereignty;. - stalwartly strive for further burgeoning the eternal principles namely justice, liberty, equality and perpetuation of peace and prosperity of the National people;. - uphold racial equality, living eternally in unity fostering the firm Union Spirit of true patriotism;. - constantly endeavour to uphold the principles of peaceful co-existence among nations with a view to having world peace and friendly relations among nations.

8 5. The territory of the State shall be the land, sea, and airspace which constitutes its territory on the day this Constitution is adopted. Basic Principles 6. The Union's consistent objectives are : (a) non-disintegration of the Union;. (b) non-disintegration of National solidarity;. (c) perpetuation of sovereignty;. (d) flourishing of a genuine, disciplined multi-party democratic system;. (e) enhancing the eternal principles of Justice, Liberty and Equality in the Union and;. (f) enabling the Defence Services to be able to participate in the National political leadership role of the State.

10 10. No part of the territory constituted in the Union such as Regions, States, Union Territories and Self-Administered Areas shall ever secede from the Union. 11. (a) The three branches of sovereign power namely, legislative power, executive power and judicial power are separated, to the extent possible, and exert reciprocal control, check and balance among themselves. (b) The three branches of sovereign power, so separated are shared among the Union, Regions, States and Self-Administered Areas. 12. (a) The legislative power of the Union is shared among the Pyidaungsu Hluttaw, Region Hluttaws and State Hluttaws. 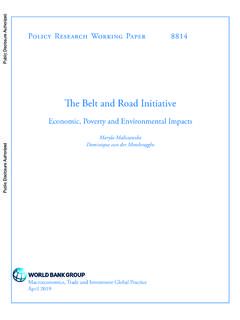 The Belt and Road Initiative - documents.worldbank.org

The Belt and Road Initiative (BRI) or One Belt One Road (OBOR) initiative was announced in the Fall of 2013 by President Xi Jinping of the People’s Republic of China (PRC).