CONSTITUTIONAL COURT OF SOUTH AFRICA . Case CCT 11/00. THE GOVERNMENT OF THE republic . OF SOUTH AFRICA First Appellant THE PREMIER OF THE PROVINCE OF THE. WESTERN CAPE Second Appellant CAPE METROPOLITAN COUNCIL Third Appellant OOSTENBERG MUNICIPALITY Fourth Appellant versus IRENE GROOTBOOM. AND OTHERS Respondents Heard on : 11 May 2000. Decided on : 4 October 2000. JUDGMENT. YACOOB J: A. Introduction [1] The people of SOUTH AFRICA are committed to the attainment of social justice and the improvement of the quality of life for everyone. The Preamble to our Constitution records this commitment. The Constitution declares the founding values of our society to be [h]uman YACOOB J. dignity, the achievement of equality and the advancement of human rights and freedoms. 1 This case grapples with the realisation of these aspirations for it concerns the state's CONSTITUTIONAL obligations in relation to housing: a CONSTITUTIONAL issue of fundamental importance to the development of SOUTH AFRICA 's new CONSTITUTIONAL order.

1 CONSTITUTIONAL COURT OF SOUTH AFRICA . Case CCT 11/00. THE GOVERNMENT OF THE republic . OF SOUTH AFRICA First Appellant THE PREMIER OF THE PROVINCE OF THE. WESTERN CAPE Second Appellant CAPE METROPOLITAN COUNCIL Third Appellant OOSTENBERG MUNICIPALITY Fourth Appellant versus IRENE GROOTBOOM. AND OTHERS Respondents Heard on : 11 May 2000. Decided on : 4 October 2000. JUDGMENT. YACOOB J: A. Introduction [1] The people of SOUTH AFRICA are committed to the attainment of social justice and the improvement of the quality of life for everyone. The Preamble to our Constitution records this commitment. The Constitution declares the founding values of our society to be [h]uman YACOOB J. dignity, the achievement of equality and the advancement of human rights and freedoms. 1 This case grapples with the realisation of these aspirations for it concerns the state's CONSTITUTIONAL obligations in relation to housing: a CONSTITUTIONAL issue of fundamental importance to the development of SOUTH AFRICA 's new CONSTITUTIONAL order.

2 [2] The issues here remind us of the intolerable conditions under which many of our people are still living. The respondents are but a fraction of them. It is also a reminder that unless the plight of these communities is alleviated, people may be tempted to take the law into their own hands in order to escape these conditions. The case brings home the harsh reality that the Constitution's promise of dignity and equality for all remains for many a distant dream. People should not be impelled by intolerable living conditions to resort to land invasions. Self-help of this kind cannot be tolerated, for the unavailability of land suitable for housing development is a key factor in the fight against the country's housing shortage. [3] The group of people with whom we are concerned in these proceedings lived in appalling conditions, decided to move out and illegally occupied someone else's land.

3 They were evicted and left homeless. The root cause of their problems is the intolerable conditions under which they were living while waiting in the queue for their turn to be allocated low-cost housing. They are the people whose CONSTITUTIONAL rights have to be determined in this case. 1. See section 1(a) of the Constitution. 2. YACOOB J. [4] Mrs Irene Grootboom and the other respondents2 were rendered homeless as a result of their eviction from their informal homes situated on private land earmarked for formal low-cost housing. They applied to the Cape of Good Hope High COURT (the High COURT ) for an order requiring government to provide them with adequate basic shelter or housing until they obtained permanent accommodation and were granted certain The appellants were ordered to provide the respondents who were children and their parents with shelter.

4 The judgment provisionally concluded that tents, portable latrines and a regular supply of water (albeit 2. The respondents are 510 children and 390 adults. Mrs Irene Grootboom, the first respondent, brought the application before the High COURT on behalf of all the respondents. 3. The judgment of Davis J in which Comrie J concurred is reported as Grootboom v Oostenberg Municipality and Others 2000 (3) BCLR 277 (C). 3. YACOOB J. transported) would constitute the bare minimum. 4 The appellants who represent all spheres of government responsible for housing5 challenge the correctness of that order. [5] At the hearing of this matter an offer was made by the appellants to ameliorate the immediate crisis situation in which the respondents were living. The offer was accepted by the respondents. This meant that the matter was not as urgent as it otherwise would have been.

5 However some four months after argument, the respondents made an urgent application to this COURT in which they revealed that the appellants had failed to comply with the terms of their offer. That application was set down for 21 September 2000. On that day the COURT , after communication with the parties, crafted an order putting the municipality on terms to provide certain rudimentary services. 4. Id at 293A. 5. The first appellant is the Government of the republic of SOUTH AFRICA (the national government); the second is the Premier of the Province of the Western Cape representing the Western Cape Provincial Government (the Western Cape government); the third appellant, the Cape Metropolitan Council (the Cape Metro) is the supervisory tier of local government in the area; and the fourth appellant is the Oostenberg Municipality (the municipality) which is a further tier of local government.

6 All the appellants are organs of government. 4. YACOOB J. [6] The cause of the acute housing shortage lies in apartheid. A central feature of that policy was a system of influx control that sought to limit African occupation of urban Influx control was rigorously enforced in the Western Cape, where government policy favoured the exclusion of African people in order to accord preference to the coloured community: a policy adopted in 1954 and referred to as the coloured labour preference policy. In consequence, the provision of family housing for African people in the Cape Peninsula was frozen in 1962. This freeze was extended to other urban areas in the Western Cape in 1968. Despite the harsh application of influx control in the Western Cape, African people continued to move to the area in search of jobs. Colonial dispossession and a rigidly enforced racial distribution of land in the rural areas had dislocated the rural economy and rendered sustainable and independent African farming increasingly precarious.

7 Given the absence of formal housing, large numbers of people moved into informal settlements throughout the Cape peninsula. The cycle of the apartheid era, therefore, was one of untenable restrictions on the movement of African people into urban areas, the inexorable tide of the rural poor to the cities, inadequate housing, resultant overcrowding, mushrooming squatter settlements, constant harassment by officials and intermittent forced The legacy of influx control in the Western Cape is the acute housing shortage that exists there now. Although the precise extent is uncertain, the shortage stood at more than 100. 000 units in the Cape Metro at the time of the inception of the interim Constitution in 1994. Hundreds of thousands of people in need of housing occupied rudimentary informal settlements 6. The background to this policy was set out fully in the majority judgment of this COURT in Ex Parte Western Cape Provincial Government and Others: In Re DVB Behuising (Pty) Ltd v North West Provincial Government and Another 2000 (4) BCLR 347 (CC) paras 41-47.

8 7. In 1985 when the coloured labour preference policy was finally abolished, it became possible for African people to acquire 99-year leasehold tenure in the Western Cape (this form of tenure had been established in the rest of the country in 1978). The following year the government abandoned its policy of influx control 5. YACOOB J. providing for minimal shelter, but little else. in its entirety. 6. YACOOB J. [7] Mrs Grootboom and most of the other respondents previously lived in an informal squatter settlement called Wallacedene. It lies on the edge of the municipal area of Oostenberg, which in turn is on the eastern fringe of the Cape Metro. The conditions under which most of the residents of Wallacedene lived were lamentable. A quarter of the households of Wallacedene had no income at all, and more than two thirds earned less than R500 per About half the population were children; all lived in shacks.

9 They had no water, sewage or refuse removal services and only 5% of the shacks had electricity. The area is partly waterlogged and lies dangerously close to a main thoroughfare. Mrs Grootboom lived with her family and her sister's family in a shack about twenty metres square. [8] Many had applied for subsidised low-cost housing from the municipality and had been on the waiting list for as long as seven years. Despite numerous enquiries from the municipality no definite answer was given. Clearly it was going to be a long wait. Faced with the prospect of remaining in intolerable conditions indefinitely, the respondents began to move out of Wallacedene at the end of September 1998. They put up their shacks and shelters on vacant land that was privately owned and had been earmarked for low-cost housing. They called the land New Rust.. 8.

10 The figures appear from a needs assessment of the Wallacedene community compiled in December 1997 on behalf of the municipality. 7. YACOOB J. [9] They did not have the consent of the owner and on 8 December 1998 he obtained an ejectment order against them in the magistrates' COURT . The order was served on the occupants but they remained in occupation beyond the date by which they had been ordered to vacate. Mrs Grootboom says they had nowhere else to go: their former sites in Wallacedene had been filled by others. The eviction proceedings were renewed in March 1999. The respondents' attorneys in this case were appointed by the magistrate to represent them on the return day of the provisional order of eviction. Negotiations resulted in the grant of an order requiring the occupants to vacate New Rust and authorising the sheriff to evict them and to dismantle and remove any of their structures remaining on the land on 19 May 1999. 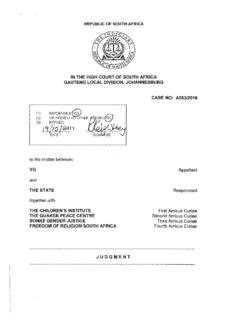 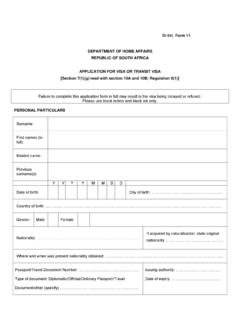 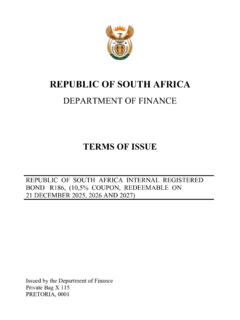 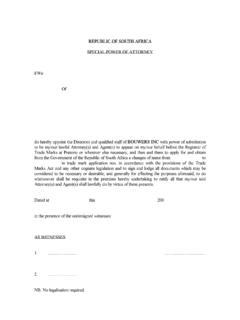 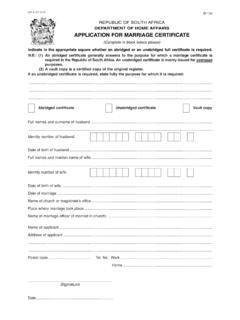 REPUBLIC OF SOUTH AFRICA DEPARTMENT OF …