CONSTITUTIONAL COURT OF SOUTH AFRICA . Case CCT 74/14. In the matter between: H Applicant and FETAL ASSESSMENT CENTRE Respondent Neutral citation: H v Fetal Assessment Centre [2014] ZACC 34. Coram: Moseneke DCJ, Cameron J, Froneman J, Jafta J, Khampepe J, Leeuw AJ, Madlanga J, Nkabinde J and Van der Westhuizen J. Heard on: 28 August 2014. Decided on: 11 December 2014. Summary: Section 28(2) of the Constitution child's best interests must be considered in determining whether to allow the child to claim compensation for a life with disability in wrongful life cases Section 39(1) of the Constitution may consider foreign law in interpreting the Bill of Rights Section 39(2) of the Constitution development of the common law High COURT incorrectly dismissed claim on the basis of the exception Complex factual and legal considerations inappropriate to make a final determination on the viability of the child's claim on the record High COURT must make the determination after considering the elements of the law of delict ORDER.

1 CONSTITUTIONAL COURT OF SOUTH AFRICA . Case CCT 74/14. In the matter between: H Applicant and FETAL ASSESSMENT CENTRE Respondent Neutral citation: H v Fetal Assessment Centre [2014] ZACC 34. Coram: Moseneke DCJ, Cameron J, Froneman J, Jafta J, Khampepe J, Leeuw AJ, Madlanga J, Nkabinde J and Van der Westhuizen J. Heard on: 28 August 2014. Decided on: 11 December 2014. Summary: Section 28(2) of the Constitution child's best interests must be considered in determining whether to allow the child to claim compensation for a life with disability in wrongful life cases Section 39(1) of the Constitution may consider foreign law in interpreting the Bill of Rights Section 39(2) of the Constitution development of the common law High COURT incorrectly dismissed claim on the basis of the exception Complex factual and legal considerations inappropriate to make a final determination on the viability of the child's claim on the record High COURT must make the determination after considering the elements of the law of delict ORDER.

2 On appeal from the Western Cape Division of the High COURT , Cape Town (Baartman J): 1. Leave to appeal is granted. 2. The appeal succeeds with costs, including the costs of two counsel. 3. The order of the High COURT is set aside and replaced with: The plaintiff is granted leave to amend the particulars of claim within 14 days.. JUDGMENT. FRONEMAN J (Moseneke DCJ, Cameron J, Jafta J, Khampepe J, Leeuw AJ, Madlanga J, Nkabinde J and Van der Westhuizen J concurring): Introduction [1] Prospective parents, who are fortunate enough to have access to that kind of medical care, often obtain medical advice during pregnancy to ascertain whether their child will be born in good health. If they are told that the child will probably suffer from a serious medical condition or congenital disability, the mother may choose not 2.

3 FRONEMAN J. to give birth to the child. That choice is given to her under SOUTH African Our law also recognises a claim by the parents for patrimonial damages in circumstances where that kind of medical advice should have been given to them, but was negligently not [2] Until now, however, our law has denied the child any claim in those The question for decision here is whether that should change. [3] The applicant is a boy who was born with Down syndrome in 2008. His mother instituted a claim on his behalf (child's claim) in the Western Cape Division of the High COURT , Cape Town (High COURT ) for damages against the respondent, the Fetal Assessment Centre (Centre). The claim is based on the alleged wrongful and negligent failure of the Centre to warn the mother that there was a high risk of the child being born with Down syndrome.

4 It is alleged that had she been warned she would have chosen to undergo an abortion. The child claimed special damages for past and future medical expenses and general damages for disability and loss of amenities of life. The Centre excepted to the claim as being bad in law, in not disclosing a cause of action recognised by our law. 1. Section 12(2)(a) of the Constitution and the Choice on Termination of Pregnancy Act 92 of 1996. The Act prescribes the conditions under which the choice may be made. 2. Mukheiber v Raath and Another [1999] ZASCA 39; 1999 (3) SA 1065 (SCA) (Mukheiber); Administrator, Natal v Edouard [1990] ZASCA 60; 1990 (3) SA 581 (A) (Edouard); and Friedman v Glicksman 1996 (1) SA. 1134 (W) (Friedman). Edouard was decided in contract, but the reasoning in the judgment also considered the delictual dimensions of a claim.

5 3. Stewart and Another v Botha and Another [2008] ZASCA 84; 2008 (6) SA 310 (SCA) (Stewart) and Friedman id. 3. FRONEMAN J. [4] The particulars of claim on behalf of the child are not a model of clarity. They are framed in terms of a duty of care owed to the child's mother, albeit in her representative capacity as the child's mother and natural guardian, and allege a failure on the part of the Centre in a number of respects [i]n breach of [that] duty of care, and therefore negligently .4 Those are terms more appropriate to the tort of negligence in English law and do not assist in determining the proper bounds of liability in terms of the wrongfulness requirement of our law of delict. The exception, in turn, is also based on the assumption that the common law of delict currently does not recognise that kind of a claim.

6 [5] The High COURT upheld the exception and dismissed the claim with costs. It did so in reliance on the Supreme COURT of Appeal's decision in [6] The approach in Stewart was that recognising a child's claim would be to make a pronouncement on a question that should not even be asked of the law .6 The Supreme COURT of Appeal distinguished the parents' claim from that of a child: In these cases the claim that arose and was awarded was that of the parents who sought to recover the additional financial burden they had to bear in consequence of the negligence. There is no question in those cases of the essential dilemma that arises in the case before us, as it is not questioned in those cases whether the child would have been better off not to have been born. Those cases commence with an 4.

7 Emphasis added. 5. Above n 3. This matter was also decided on exception. 6. Id at para 28. 4. FRONEMAN J. acceptance of the fact that the birth has occurred and seeks to address the consequences of the birth. 7. This was, however, to be distinguished from the child's claim: At the core of cases of the kind that is now before us is a different and deeply existential question: was it preferable from the perspective of the child not to have been born at all? If the claim of the child is to succeed it will require a COURT to evaluate the existence of the child against his or her non-existence and find that the latter was preferable. 8. And, finally: The essential question that is asked when enquiring into wrongfulness for purposes of delictual liability is whether the law should recognise an action for damages caused by negligent conduct and that is the question that falls to be answered in this case.

8 I. have pointed out that from whatever perspective one views the matter the essential question that a COURT will be called upon to answer if it is called upon to adjudicate a claim of this kind is whether the particular child should have been born at all. That is a question that goes so deeply to the heart of what it is to be human that it should not even be asked of the law. For that reason in my view this COURT should not recognise an action of this kind. 9 (Emphasis added and footnote omitted.). [7] The child seeks leave to appeal directly to this COURT against the High COURT 's decision. He contends that in the particular circumstances it is reasonable and in the interests of justice to do so, given that an appeal to the Supreme COURT of Appeal is likely to be futile in light of its relatively recent decision in Stewart.

9 7. Id at para 10. 8. Id at para 11. 9. Id at para 28. 5. FRONEMAN J. Issues [8] The following issues arise: (a) Should leave to appeal be granted? (b) If leave is granted, was the exception procedure appropriate? (c) The merits of the appeal. (d) Order and costs. Leave to appeal [9] Leave to appeal must be granted. The applicant seeks the development of the common law to allow for the recognition of the child's claim. That is an issue of major legal and CONSTITUTIONAL importance. Prospects of success exist. The Supreme COURT of Appeal has already given a decision setting its face against recognition of the child's claim. This is not a decisive consideration because the possibility is always there that it could be persuaded to change course. But, again, it may not. Usually this COURT will be deferent in allowing the common law to be developed in the High COURT and the Supreme COURT of Appeal.

10 But here, as will be seen, the outcome of this appeal will allow the High COURT and, if necessary, later the Supreme COURT of Appeal to play a significant role in the further development of the common law, within the guidelines of this judgment. Was the exception procedure appropriate? [10] In the High COURT the matter was decided on exception. Exceptions provide a useful mechanism to weed out cases without legal merit , as Harms JA said in 6. FRONEMAN J. The test on exception is whether on all possible readings of the facts no cause of action may be made out. It is for the excipient to satisfy the COURT that the conclusion of law for which the plaintiff contends cannot be supported on every interpretation that can be put upon the [11] This COURT has decided appeals in matters where exceptions were On other occasions it considered that the question of the development of the common law would be better served after hearing all the evidence.

THE SUPREME COURT OF APPEAL OF SOUTH AFRICA JUDGMENT Case no: 258/10 In the matter between: ANDRE VERNON OOSTHUIZEN Appellant and ROAD ACCIDENT FUND Respondent 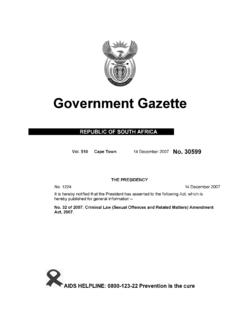 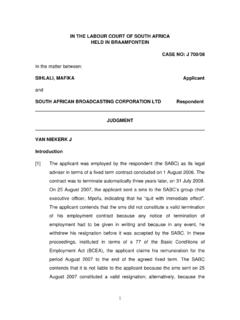 IN THE LABOUR COURT OF SOUTH AFRICA - SAFLII

IN THE LABOUR COURT OF SOUTH AFRICA HELD IN BRAAMFONTEIN CASE NO: J 700/08 In the matter between: SIHLALI, MAFIKA Applicant

The principle of legality in constitutional matters …

whatsoever will only come into existence once a proposed tenderer has been informed in writing of the fact that he is awarded the tender.' '1.8 All tenderers are obliged to …

IN THE LABOUR COURT OF SOUTH AFRICA, CAPE TOWN …

2 . found that the dismissal of the first respondent was both (Swanepoel) substantively and procedurally unfair, and had ordered the applicant to

ABC (PTY) LTD THE COMMISSIONER FOR THE SOUTH …

agreements with South African Airways, the City of Cape Town, the South African Broadcasting Corporation and Telkom in terms of which the sponsors paid money towards and provided goods and services for the festivals, in return for which the 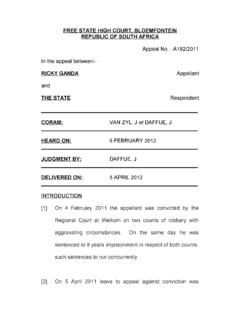 granted by the court a quo. THE ISSUES [3] It is apparent from the application for leave to appeal that appellant relies on several grounds of appeal, but the two 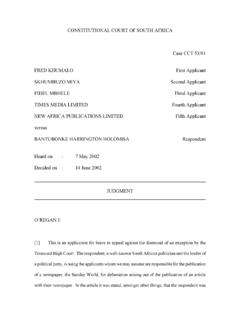 O’REGAN J directly applicable in this case despite the fact that the litigation does not involve the state nor any organ of state. This is a matter which will be considered later in this judgment. 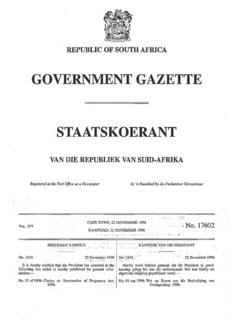 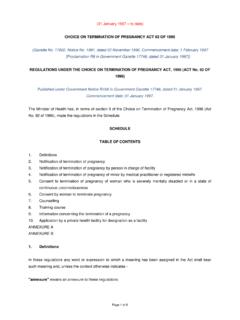 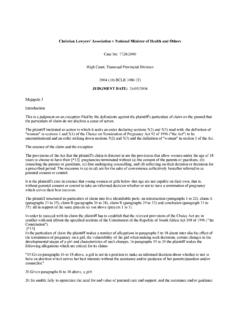 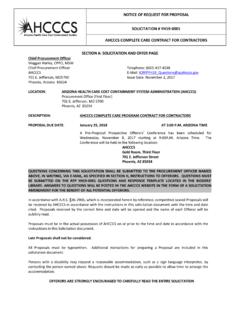 701 e. jefferson street . phoenix, az 85034 . questions concerning this solicitation shall be submitted to the procurement officer named above, in writing, via e-mail, as specified in section h, instructions to offerors. 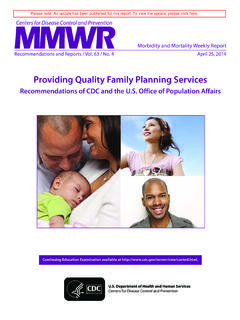