2 This is a lengthy and comprehensive document containing a combination of specific measures and general guidelines to be adopted and implemented by Indian Insurers by April 1 2010. The guidelines are supplemental to the requirements of the Companies Act 1956, the Insurance Act 1938 and any other law on the basis that where any provision of the guidelines conflicts with another enactment, that other enactment will prevail. However, where the requirements of the guidelines are more rigorous, they will take precedence. There seems to be a number of driving forces behind these guidelines, including: the unprecedented revelations of the financial irregularities at Satyam.

3 The impact of the credit crunch on a number of overseas Insurers ; and the perceived importance of the financial sector in general to Indian economic growth and the public at large. Of equal importance is the fact that in the coming years a number of Indian Insurers are expected to come to market for the first time. According to Section 6AA of the Insurance Act, the existing position is that the Indian promoter of an Indian insurer cannot hold more than 26% of the paid-up equity. For a newly formed insurer , a holding above 26% must be gradually brought down to 26%, starting at the latest from the 10th year after the insurer commenced business.

4 A number of Insurers will be commencing their 10th year in the near future and the IRDA has already announced that it intends to publish its guidelines on Insurers making public offerings soon. 1. With this in mind, the IRDA has stated its belief that the relationship between the board of directors, senior management and shareholders is fiduciary, with an enhanced responsibility to protect the interests of all stakeholders. According to the IRDA, Insurers need a Corporate Governance framework that clearly defines roles, responsibilities and accountability within the organisation, and that contains built-in checks and balances.

5 In particular, and with specific reference to the IRDA's responsibility to protect the interests of policyholders, the IRDA wants to: ensure that Insurers have in place Corporate Governance practices that maintain solvency;. secure sound long-term investment policies;. ensure that underwriting is carried out on a prudential basis; and ensure that where Insurers are part of a conglomerate, there is overall risk management across the group and problems with one part is not spread to other parts. The guidelines are intended to ensure that an insurer 's Corporate Governance structure recognises the expectations of stakeholders and the regulator, and can address quickly non-compliance or weak oversight and controls.

6 Significant owners, controlling shareholders and conflicts of interest The IRDA has taken the opportunity to reiterate certain existing rules and regulations - for example, the 26% cap on foreign holdings in Indian Insurers and how that cap is to be calculated, and the requirement for prior IRDA approval of the transfer of shares either which exceed 1% of the share capital or which, after transfer, will leave one person holding 5% or more of the share capital ( where banking or investment companies are involved). The IRDA says that where there is a conflict of interest between shareholders, management and policyholders, the board's duty is to act in the interest of policyholders or prospective policyholders and to put in place adequate systems, policies and procedures to address potential conflicts of interest.

7 These will include: board-level reviews of key transactions;. disclosures of any conflicts of interest; and ensuring that auditors, actuaries, directors and senior managers do not simultaneously hold more than one position in an insurer that could lead to actual or potential conflicts of interest. Governance structure The IRDA suggests that even where Insurers have not yet gone public, they should take steps to adopt Clause 49 of the Stock Exchanges Listing Agreement so that there is a smooth transition when they do eventually list.

8 Included within the recommendations is the appointment of a board chairman with distinct executive and oversight responsibilities. 2. Board composition The board should comprise independent, competent and qualified directors who have sufficient time and commitment to fulfil their responsibilities and are familiar with the organisational structure, processes and products of the insurer . The size of the board should be commensurate with the scale, nature and complexity of the business. Directors must satisfy criteria relating to integrity demonstrated in personal behaviour and business conduct, soundness of judgement and financial soundness.

9 To this end, a due diligence enquiry must be undertaken on proposed directors and existing directors at the time of their appointment or reappointment, which is to be accompanied by a declaration. The information in the declaration must be validated annually. The IRDA says that directors will be required to enter into a deed of covenant with the insurer "to ensure that there is a clear understanding of the mutual role of the company, the Directors and the Board in Corporate Governance ". The IRDA believes that it is "desirable" for at least one-third of the board to comprise independent directors.

10 This fraction rises to one-half where the company has an executive chairman. The IRDA insists on at least two independent directors until listing. No more than one family member or close relative (as defined in the Companies Act) or associate (eg, partner or director) should be on the board. Board responsibility The board is ultimately responsible for the direction, control and Governance of the insurer , to which end it should articulate and commit to a Corporate philosophy and Governance standards that will shape the insurer 's level of risk adoption, standards of business conduct and ethical behaviour at the macro level. 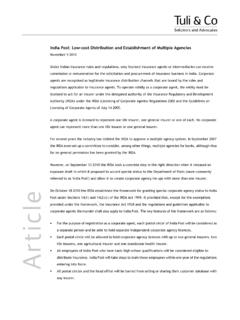 India Post’s head office will be barred from obtaining a corporate agency licence or engaging in the distribution of insurance in any other way. 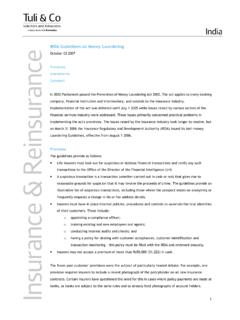 administering the policy. However, if the group policyholder™s administrative costs must be internalised completely, even on non-employer-employee schemes that are merely organised by an entity and through 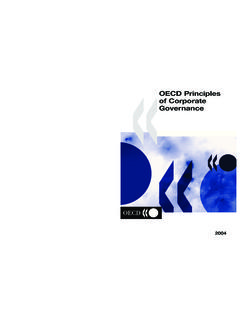 Repository Date of publication The Nestlé … 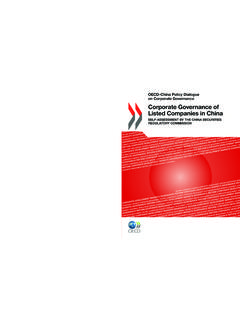 Corporate Governance of Listed Companies in … 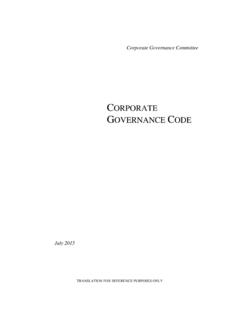 4 Main Principles and temporary regime I. Adoption of and compliance with this Corporate Governance Code (the “Code”) is voluntary. II. Each article of the Code is divided into principles, criteria and a