2 Although the exact taxonomy is still not known, the Mengmeng Gu Insect is most commonly referred to as Assistant Professor and Crapemyrtle bark scale (CMBS). extension Ornamental Horticulturist Since the initial sighting in 2004, Texas A&M AgriLife Figure 1. Crapemyrtle bark scale (CMBS). the Insect has been spreading at an extension Service alarming rate across the Southeast. The Insect was first noted in use of crapemyrtles in landscapes McKinney, Texas (self-designated as across a large part of the To date America's Crapemyrtle city ), in 2005 there has been no research to evaluate and had spread throughout most of whether there is a range in suscepti . the Dallas-Fort Worth area by 2010. bility to this Insect across the The scale was reported in Ardmore, hundreds of Crapemyrtle cultivars;. Okla., and Shreveport, La., in 2012 however, ancecdotal observations and Houma, La.

3 (60 miles southwest from McKinney, Texas, suggest the of New Orleans) in 2013. In October scale may be worse on hybrids 2013, the Insect was confirmed in (fauriei indica). Germantown, Tenn. (Memphis Arkansas Is area), and in Little Rock, Ark., in Insect Description January 2014. Our Campus Crapemyrtle bark scale is easy to identify since, in the , it is the Heightened concern about this new pest is based on the speed at first and only known bark scale to Visit our web site at: which it is spreading and the common occur on crapemyrtles. The adult University of Arkansas, United States Department of Agriculture and County Governments Cooperating Figure 2. Adult female CMBS on Crapemyrtle bark Figure 3. Heavy infestation of Figure 4. Sooty mold from heavy CMBS on most recent flush CMBS infestation of growth females appear as white or gray felt-like encrustations were observed on a warm day in January 2014.

4 After (Figure 2) on small twigs to large trunks, often the first molt, nymphs lose their legs and antenna appearing near pruning wounds or in branch crotches and become sessile (Figure 5). During the last instar, on older wood. On the most current flush of growth males are quiescent (pupal type stage) and develop and under heavy infestation, distribution may be external wings. Upon emergence, males find a sessile more uniform (Figure 3). Up close, CMBS is white to female and mate, completing the life cycle. At present gray in color and approximately 2 mm in length. in the Southern , the number of generations Careful examination may reveal dozens of pink eggs completed in a year for this species is unknown, or crawlers under some of the larger white scale but it is suspected that CMBS may complete at covers. Most gardeners will be alerted to CMBS by least two generations in Arkansas.

5 It is possible black sooty mold which appears on the bark that adult females and eggs overwinter, but crawlers (Figure 4). The presence of sooty mold may confuse and later stage nymphs have been observed the diagnosis since that is also commonly associated overwintering in Arkansas under loose bark and in with a significant aphid problem. This felt scale is not cracks and crevices (Figure 8). classified as either an armored or soft scale. Life Cycle As female nymphs mature, they secrete white threads (Figure 5) that become felted or matted into a thick, whitish to grayish scale covering over the entire body (Figure 6). Adult females under this covering are wingless and sessile (attached and inca . pable of moving). It is thought that for this species of scale, eggs are laid under the covering (probably late April to mid-May in Arkansas) and the female then dies. When the eggs hatch into first instar nymphs, these nymphs have legs and antenna and are mobile, thus the term crawlers (Figure 7).

6 These crawlers emerge from under the mother scale and disperse over a short period (about one to two days). We suspect that this emergence occurs beginning mid- Figure 5. CMBS nymphs exuding white threads that ultimately May to early June in Arkansas; however, crawlers form the felt cover Figure 6. Adult female CMBS Figure 8. Settled CMBS nymphs under loose bark Figure 7. CMBS crawlers on pruning cuts (L) and close-up of crawlers (R). Control and crotches of the plants where scales shelter may be beneficial. Be sure to use suffi . Based on our limited experience with this pest, it cient volume to allow for penetration behind does not appear that CMBS will be easy to control, loose bark and into cracks and crevices. though soil-applied neonicotinoids do provide signifi Winter is an especially good time to treat for cant suppression. Our current best suggestions for scales because a higher (winter) application control of this Insect include: rate can be used without damaging the plant.

7 Thorough coverage of the tree is especially For heavily infested plants, wash the trunk important when treating with oil. and reachable limbs with a soft brush and mild solution of dishwashing soap. This will Application of systemic insecticides as a remove many of the female scales and egg drench applied to the root zone has shown masses and make insecticide control more the most promise in tests to date. Imidaclo . effective. Also, washing will remove much of prid (Merit or Bayer Advanced Garden the black mold that builds up on the bark on Tree and Shrub Insect Control), thiomethox . infested trees. am (Meridian ) and dinotefuran (Greenlight Tree and Shrub Insect Control with Safari). Horticultural oil has not yet been shown to be have shown best control when applied effective against this Insect ; however, a between May and July. When drenching the winter application of dormant oil to the bark soil with a systemic insecticide, allow several weeks for the product to be distributed If you notice symptoms of scale Insect infestation throughout the plant.

8 Additionally, acetami on your crapemyrtles in Arkansas, please contact the prid and clothianidin, also neonicotinoids, office of your local Cooperative extension Service or have demonstrated good control. the Arkansas State Plant Board. Certain Insect growth regulators (IGRs) are References recommended for scale control in woody orna . mentals (MP144, Insecticide Recommenda Merchant, M. Crape myrtle scale: New pest of Accessed tions for Arkansas) but have not yet been on Jan. 10, 2014. evaluated on CMBS. Merchant, M. Update on crape myrtle scale. Lady beetles should be preserved, as the Accessed twice-stabbed lady beetle is an efficient on Jan. 10, 2014. predator of this scale (Figure 9). Morgan, J. Invasive species troubles crape myrtles. /october/headline_news/Invasive-species- troubles . Figure 9. Pupa of lady beetle, Accessed on Jan. 10, 2014. predator of CMBS.

9 All chemical information provided is given with the understanding that no endorsement of named products is intended nor is criticism implied of similar products that are not mentioned. Individuals who use pesticides are responsible for ensuring that the intended use complies with current regulations and conforms to the product label. Before purchasing or using any pesticide, always read and carefully follow the label directions. Printed by University of Arkansas Cooperative extension Service Printing Services. DR. JAMES ROBBINS is professor and extension horticulture Issued in furtherance of Cooperative extension work, Acts of May 8 and specialist and DR. JOHN HOPKINS is associate professor and Exten- June 30, 1914, in cooperation with the Department of Agriculture, sion entomologist - urban, University of Arkansas Division of Agricul- Director, Cooperative extension Service, University of Arkansas. 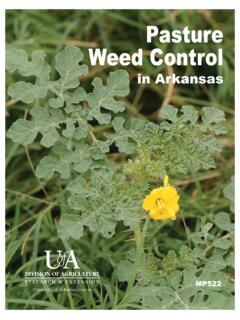 herbicide absorption into the stump. Pasture Weed Control in Arkansas . Guidance Systems (cont.) A guidance system will help prevent this kind of streaking. 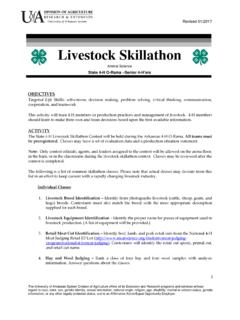 Revised 01/2017 . 1 . The University of Arkansas System Division of Agriculture offers all its Extension and Research programs and services without 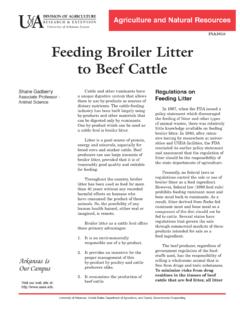 litter containing high concentrations of copper should. litter to cattle. deficiency. Further research is needed on the feeding environmental emissions. 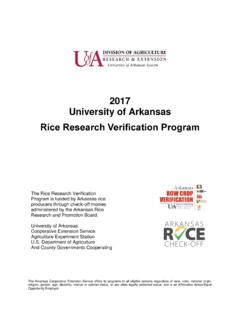 The Arkansas Cooperative Extension Service offers its programs to all eligible persons regardless of race, color, national origin, religion, gender, age, disability, marital or veteran status, or any other legally protected status, and is an Affirmative Action/Equal 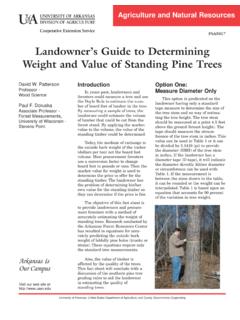 Landowner’s Guide to Determining Weight and … 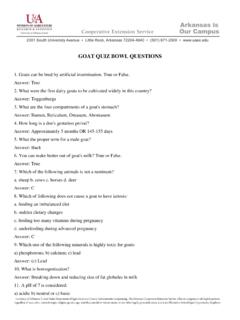 GOAT QUIZ BOWL QUESTIONS 1. Goats can be bred by artificial insemination. True or False. Answer: True 2. What were the first dairy goats to … 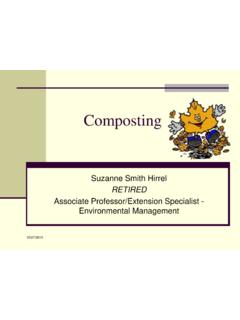 Things, Composting, Do the rot thing 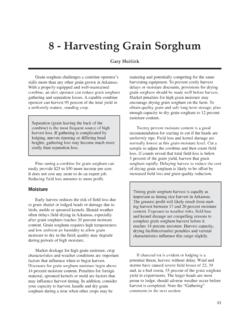 flat. Economic justification of these header purchases depends on the grain sorghum market value and how much additional grain sorghum can be retrieved compared to your rigid cutterbar header. 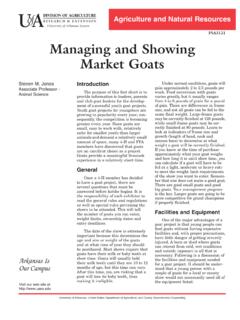 Goats need a combination arrangement: access to a shed and an area where they can get away from or stand in the sunshine. The shed area should have 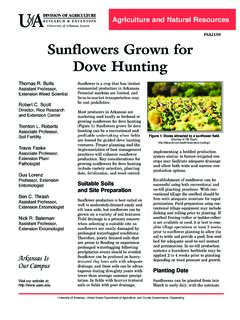 Sunflowers grown for dove hunting should be at. can be a recreational and profitable least of 45°F undertaking when fields are leased for planting. for guided dove hunting ventures. flower Proper planning and the use of good germination requires a soil tempera-