2 An example can help to illustrate this process. David Canter, a leading investigative psychologist (he prefers this term to profiler') was approached by the police to help in an investigation into a series of rapes and murders in London in the mid 1980s. Using the information on the crimes supplied by the police, Canter applied psychological principles to suggest where the Offender was living (in the area of the first three attacks), the type of job he did (semi-skilled labour, possibly connected to the railways), the sort of social life he had (a loner with only one or two close male friends) and his history of offending. Canter's profile allowed the police to review their list of suspects and prioritise John Duffy for further investigation. He was placed under observation and subsequently arrested, charged, tried and convicted. Canter's profile proved to be remarkably accurate. It is important to note, however, that the profile was not used to prove that Duffy was the attacker; its contribution to the case was to help the police narrow down their list of thousands of suspects and to target their subsequent investigations more effectively.

3 Canter's approach to profiling represents one of four main approaches to Offender profiling identified by Ainsworth (2001). These are: The geographical approach this looks at patterns in the location and timing of offences to make judgements about links between crimes and suggestions about where offenders live and work. Investigative psychology this grew out of geographical profiling and uses established psychological theories and methods of analysis to predict Offender characteristics from offending behaviour. The typological approach this involves looking at the characteristics of crime scenes to assign offenders to different categories, each category of Offender having different typical characteristics. The clinical approach this approach uses insights from psychiatry and clinical psychology to aid investigation where an Offender is thought to be suffering from a mental illness of other psychological abnormality. There is considerable debate about which of these approaches is the most effective way of profiling offenders and, indeed, whether psychological profiling has anything useful to offer at all. 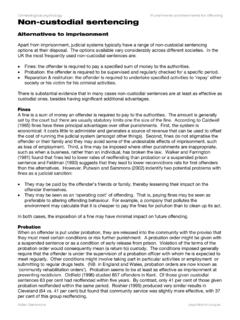 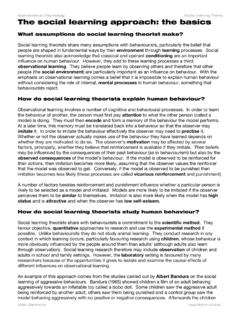 Approaches to |Psychology Social Learning Theory Aidan Sammons psychlotron.org.uk were given the opportunity to play with a … 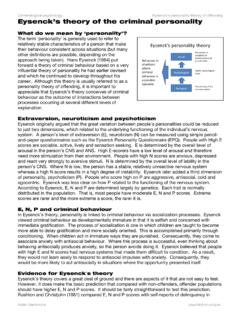 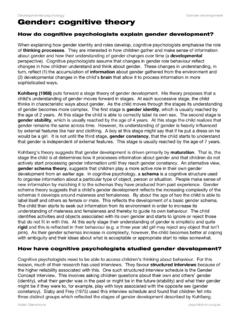 Developmental psychology Gender development Aidan Sammons psychlotron.org.uk Other cognitive psychologists favour quasi-experimental methods in their research. This involves comparing boys and girls or children of different ages in their performance of tasks that involve

Developmental psychology Gender development Aidan Sammons psychlotron.org.uk Evaluation of the social learning theory of gender A number of other studies have shown that girls and boys are reinforced and punished for different

strangers have been asked to help people in various ways (e.g. giving directions, donating to charity, helping an injured passer by) have confirmed this finding, with help more likely to be given in small towns than large cities (e.g. Amato, 1983; Levine et al, 1994). Some research has linked crowding to antisocial behaviour, but not in a

How do humanistic psychologists explain behaviour? Carl Rogers’ idea about behaviour centre on the self, which is the person’s consciousness of their own identity. Rogers believed that people could only fulfill their potential for growth if they had a basically positive view of themselves (positive self regard). This can only happen if they ...

Criminological psychology Biological theories of offending Aidan Sammons psychlotron.org.uk As with the family history data, these results are consistent with a genetic influence on criminal