2 However, the risk of contamination increased by storage of food at ambient temperature, by using insufficiently high temperatures to reheat the food , and by adding contaminated ingredients such as dried ground crayfish and soybean powder at stages where no further heat treatment was applied. The purchasing of contaminated raw foodstuffs and ingredients, particularly raw akamu, from vendors in open markets is also a CCP. Conclusion Although an unsafe environment poses many hazards for children's food , the hygienic quality of prepared food can be assured if basic food safety principles are observed. When many factors contribute to food contamination, identification of CCPs becomes particularly important and can facilitate appropriate targeting of resources and prevention efforts. Keywords Diarrhea, Infantile/etiology; Infant food /microbiology; food contamination/analysis; Water micro- biology; food handling ; food hygiene; Risk assessment; Task performance and analysis; Nigeria (source: MeSH ).

4 Epidemiological evidence shows that diarrhoea is a major problem, 1. Lecturer in International Health and Director of Studies, Master with an estimated one-in-six children under the age of of Community Health Programme, Division of International Health, five years experiencing at least one episode every Liverpool School of Tropical Medicine, Pembroke Place, Liverpool, fortnight (1). Children aged 4 24 months are at the L3 5QA, England (tel: (+44) 151 708 9393; fax: (+44) 151 707 1702). Correspondence should be addressed to this author. greatest risk of developing diarrhoea from contami- 2. Primary Care Unit, School of Postgraduate Medicine, University nated food and water. Normally, breast milk is the of Warwick, Coventry, England. main source of nourishment for children within their 3. Head, Department of food Science and Technology, Federal first months of life. The dependence on breast milk University of Technology, Imo State, Nigeria.

5 Reduces their exposure to food -borne pathogens, and 4. Research Associate, Department of Toxicology, Texas Southern the anti-infective properties of breast milk also afford University, Houston, TX, USA. some protection. Between 4 and 6 months of age, 5. Senior Lecturer in Environmental Science, School of Science, Federal however, complementary foods are given, and University of Technology, Imo State, Nigeria. children are thus exposed to food -borne pathogens 6. Consultant Sociologist, Ifako Saw-mill, Bariga, Lagos, Nigeria. (3). For example, a study of 454 children in eastern Ref. No. 99-0261 Nigeria (4) showed that the incidence of diarrhoea Bulletin of the World Health Organization, 2001, 79 (5) # World Health Organization 2001 423. Research was highest among children aged between 6 and period (11). Although a hazard is defined as the 12 months the age range which coincides with the presence of biological, chemical, or physical agents in usual weaning period in the region.

6 The development food that may cause the food to be unsafe for human of sustainable strategies for controlling diarrhoea consumption (12), this study considered only micro- among children in the region, and in the country as a biological hazards. A Critical control point (CCP) is a whole, would thus constitute a significant advance in point, step, or procedure at which a significant hazard public health. occurs in food preparation and handling , and at which control can be applied to prevent, eliminate, or Prevention of diarrhoea reduce the hazard to an acceptable level (12). Sustainable preventive strategies include a selection of proven interventions targeted either at the Sampling method pathogens that cause diarrhoea or at their routes of The multistage sampling technique (13) was used to transmission (5). In the 1980s, the World Health select the study sample. A household was defined as Organization (WHO) reviewed potential strategies individuals who live in the same house and who for controlling diarrhoeal diseases and evaluated normally eat at least one main meal together in a day.

7 18 interventions. The interventions were classified We compiled a register of children 4 24 months old into three categories according to their effectiveness who qualified for inclusion based on these criteria, and feasibility: interventions that are highly effective using records from primary health care centres, and that have strong evidence of feasibility; inter- voluntary village health workers, and private medical ventions of uncertain effectiveness and feasibility, facilities. An optimum sample size of 601 was which require further research; and interventions that calculated using Epi-Info version (14), from are ineffective or of limited feasibility (6). Seven which 120 children and their households were interventions were identified as highly effective: selected for study, using the systematic random promoting breast feeding; improving weaning prac- sampling technique. tices (including improving the hygiene of comple- mentary foods); immunization against rotavirus; Study areas immunization against cholera (in special situations); Using a current geopolitical map, the state was immunization against measles; improving the water divided into three zones: Owerri, Okigwe, and Orlu.

8 Supply and sanitation; and promoting personal and Two local government areas, one urban and one domestic hygiene. Of these, promotion of food rural, were randomly selected from each zone. A total hygiene has received the least attention (3), even of 14 communities or wards were randomly selected though it is accepted that unhygienically prepared from a list within each sample local government area. complementary foods are prone to contamination To select the sample households, every fifth child out with diarrhoeal pathogens, and up to 70% of all cases of the 601 children in the sample frame was chosen, of diarrhoea in children may be attributable to food to a total of 120 children, and hazard analyses of contamination (7, 8). complementary foods were undertaken in their households. Hazard Analysis Critical control Point strategy In a comprehensive review of studies assessing the Observation of food preparation and contamination of complementary foods, Motarjemi environmental conditions et al.

9 (7) stressed the need to apply the Hazard HACCP evaluation of complementary foods in Analysis Critical control Point (HACCP) strategy. households was preceded by a community mobiliza- This strategy identifies hazards associated with tion exercise that involved contact with the appro- different stages of food preparation and handling , priate primary health care centres and households in assesses the relative risks, and identifies points where the study communities. As part of this exercise, control measures would be effective. Therefore, as detailed information about the objectives and part of a wider effort to develop a hygiene-promotion methods of the study were provided to household intervention for preventing childhood diarrhoea, we members, who were given the option of participating used the HACCP strategy to study diarrhoeal in the study. The mobilization process concluded diseases among children in 120 households in Imo with a pilot study of five households that were not state, Nigeria.

10 Included in the main study. Because of the effective- ness of the mobilization exercise, people in every household contacted for the main study agreed to Methods participate. In liaison with staff of the appropriate primary Selection of participants health care centre, we visited the home of each Children having more than three separate episodes of selected child and observed the preparation and diarrhoea in the three months preceding the study handling of complementary foods. Sociodemo- were classified as having frequent diarrhoea (9, 10). graphic and environmental health data were obtained Diarrhoea was defined as passage of three or more by means of a short questionnaire in an interview with loose, watery, or bloody stools within a 24-hour the parent or caregiver responsible for preparing and 424 Bulletin of the World Health Organization, 2001, 79 (5). complementary food preparation and handling handling the child's food . 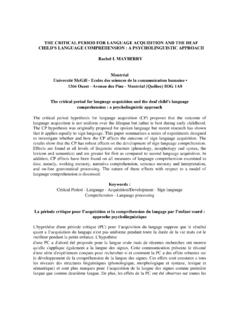 THE CRITICAL PERIOD FOR LANGUAGE …

the critical period for language acquisition and the deaf child's language comprehension : a psycholinguistic approach rachel i. mayberry montréal 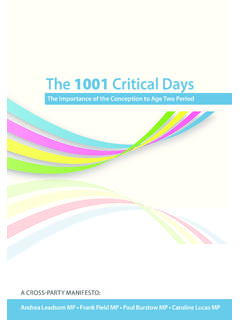 The 1001 Critical Days 3 Contents Foreword by Sally Davies 2 Introduction by MPs 4 Why is the conception to age two period so critical? 5 0-2 baby diagram 6 Tiered support diagram 7 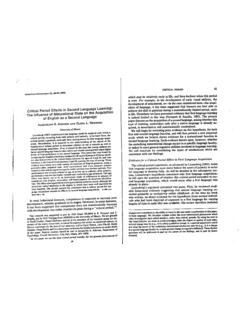 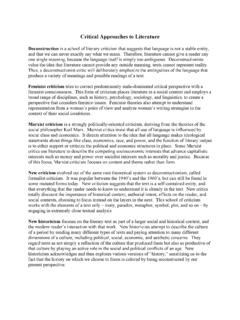 Critical Approaches to Literature - University of …

Critical Approaches to Literature Deconstruction is a school of literary criticism that suggests that language is not a stable entity, and that we can never exactly say what we mean. Therefore, literature cannot give a reader any 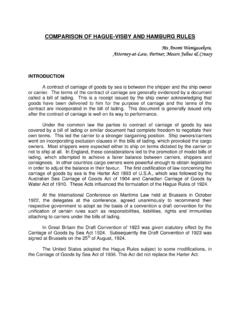 comparison of hague and hamburg-AW

Act, the rules are given the force of law in relation any receipt which is a non-negotiable document marked as such, if the contract contained in or evidenced by it is a contract of 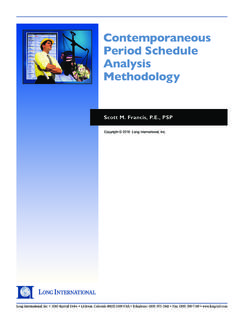