April 2005. democratic Peace theory : A Review and Evaluation . by Jeff Pugh CEMPROC Working Paper Series In Peace , conflict, and development Center for Mediation, Peace , and Resolution of Conflict, International CEMPROC Occasional Paper Series democratic Peace theory : A Review and Evaluation Jeff Pugh April, 2005. All rights reserved; please do not reproduce without permission. 1. CEMPROC Occasional Paper Series According to Jack Levy, the democratic Peace thesis is the closest thing we have to an empirical law in the study of international relations. 1 This theory refers to the idea that democracies by nature do not go to war with one another, a fact which historically has guaranteed Peace between democratic states, arguably without exception.

1 April 2005. democratic Peace theory : A Review and Evaluation . by Jeff Pugh CEMPROC Working Paper Series In Peace , conflict, and development Center for Mediation, Peace , and Resolution of Conflict, International CEMPROC Occasional Paper Series democratic Peace theory : A Review and Evaluation Jeff Pugh April, 2005. All rights reserved; please do not reproduce without permission. 1. CEMPROC Occasional Paper Series According to Jack Levy, the democratic Peace thesis is the closest thing we have to an empirical law in the study of international relations. 1 This theory refers to the idea that democracies by nature do not go to war with one another, a fact which historically has guaranteed Peace between democratic states, arguably without exception.

2 The democratic Peace thesis offers a strong empirical attack in the liberal arsenal against the traditional intellectual hegemony of realism in American IR theory . Perhaps for this reason, there has been a spirited debate between proponents of democratic Peace theory and critics who level a number of counterattacks. Among others, these include charges that the theory is a statistical artifact, that the terms of its definition ( democratic ' or liberal', war', etc.) are defined in a tautological and self-serving manner, and that insufficient historical evidence is available to make accurate, generalizable conclusions since both war between states and the existence of democracy is historically relatively rare.

3 democratic Peace is rooted theoretically in the writings of Immanuel Kant, and in particular his work Perpetual Peace . Kant claims that Peace is a reasonable outcome of the interaction of states with a republican form of government. He believes that the republican constitution gives a favorable prospect for the desired consequence, , perpetual Peace . The reason is this: if the consent of the citizens is required in order to decide that war should be declared (and in this constitution it cannot but be the case), nothing is more natural than that they should be very cautious in commencing such a poor game, decreeing for themselves all the calamities of war. Contrasting republicanism with other forms of governments, Kant argues, On the other hand, in a constitution which is not republican, and under which the subjects are not citizens, a declaration of war is the easiest thing in the world to decide upon, because war does not require of the ruler, who is the 1.

4 Jack S. Levy, Domestic Politics in War, in Robert I. Rotberg and Theodore K. Rabb, eds., The Origin and Prevention of Major Wars (New York: Cambridge University Press, 1989), p. 88. 2. CEMPROC Occasional Paper Series proprietor and not a member of the state, the least sacrifice of the pleasure of his table, the chase, his country houses, his court functions, and the like. 2. Because Peace under Kant's paradigm is a function of the form of government of the two potential parties to a conflict, the logical implication is that liberal republicanism must be diffused and made universal in order to achieve perpetual Peace among states. Until states share a common liberal perspective, war will be necessary to prevent autocratic and despotic governments from oppressing their own people and from threatening the freedom of citizens in the liberal states themselves.

5 This semi-evangelical view of liberalism may also contribute to strengthening the democratic Peace theory . Authoritarian regimes may view liberal states as particularly threatening because of this ideology that values the diffusion of liberalism to other states, which would of course threaten the authoritarian leader's own power. Liberal states, on the other hand, would not feel threatened by the universalistic outlook of other liberal republics since they already share a similar form of government. It is important to recognize that the term democratic Peace ' is somewhat ambiguous, even misleading, as it tends to conflate democracy (which can be ambiguously defined itself) with other terms.

6 Some scholars prefer to talk about the liberal Peace theory '. instead of democratic Peace , saying that this formulation is more relevant and easier to define in empirical Kant himself notes that democracy (a form of sovereignty) is often confused with republicanism (a form of government). The presence of a republican constitution is one of his primary criteria for attaining perpetual 2. Immanuel Kant, Perpetual Peace . On History, trans Beck, Anchor, &. E. Fackenheim (New York: The Liberal Arts Press, 1957), p. 94-95. 3. See John M. Owen, Liberal Peace , Liberal War (Ithica: Cornell University Press, 1997); Michael Doyle, Ways of War and Peace : Realism, Liberalism, and Socialism (New York: Norton & Company, 1997).

7 3. CEMPROC Occasional Paper Series Peace . He claims that The mode of government is incomparably more important to the people than the form of sovereignty. 4. Liberal states in Kant's paradigm are characterized by certain criteria that distinguish them from authoritarian and other autocratic, nondemocratic forms of government. These include a republican form of government based on the rule of law that is governed in a representative manner through a separation of powers; respect for human rights; and interdependent social and economic relations. Taken together, these criteria are necessary and sufficient to create stable Peace between two states with the expectation that this Peace will endure, according to An important part of democratic Peace is that liberal, democratic states6 share a common normative dedication to liberal ideals, and they frequently employ liberal justifications for going to war.

8 Michael Doyle argues that quite often, the violent interventions that liberal states engage in are publicly justified in the first instance as attempts to preserve a way of life': to defend freedom and private enterprise. 7 When the potential adversary shares a commitment to the protection of basic freedoms and human rights, and its government truly represents the wishes of the population (as evidenced by free and fair, competitive elections), it is much more 4. Immanuel Kant, Perpetual Peace . , p. 97. 5. Michael Doyle, Ways of War and Peace : Realism, Liberalism, and Socialism, p. 286-287. 6. The definitions offered for democracy are varied and contentious, and are very important for the empirical examination of the theory 's claim.

9 Bruce Russet gives a typical if slightly broad (by excluding liberal protections of rights from the criteria). definition, which considers democratic states to be those with governments that are popularly selected through periodic contested elections in which a substantial portion of citizens are eligible to vote, and that the possibility exists for the leaders to be defeated and replaced through election and a peaceful transfer of power. Finally, he indicates that democracy must exist and exhibit some minimum level of stability or institutionalization: some period must have elapsed during which democratic processes and institutions could become established, so that both the citizens of the democratic ' state and its adversary could regard it as one governed by democratic principles.

10 (p. 16) Bruce Russett, Grasping the democratic Peace (Princeton: Princeton University Press, 1993). 7. Michael Doyle, "Kant, Liberal Legacies, and Foreign Affairs.", p. 335. 4. CEMPROC Occasional Paper Series difficult for democratic governments to justify war to their own citizens. Perception is an important component of liberal Peace . Put crudely, liberal states are peaceful toward one another because they trust other liberal states to behave rationally and sensibly, whereas they are suspicious that non-liberal states may not behave in this manner. John Owen explains that liberals view foreign states with prejudice. Prima facie, they believe that, irrespective of physical capability, liberal states are safe and illiberal states potentially dangerous. 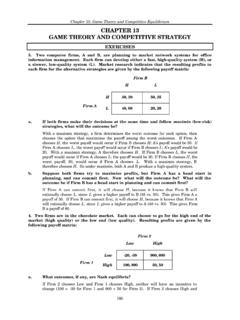 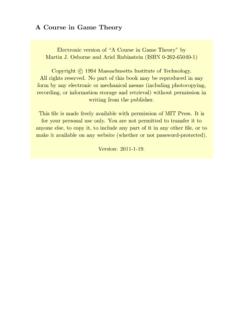 A Course in Game Theory - Enrique A. Bour 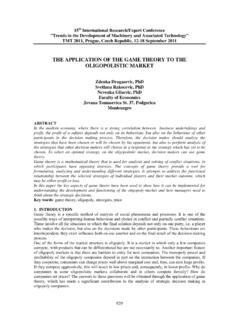 THE APPLICATION OF THE GAME THEORY TO THE …

930 2. THE BASIC CONCEPTS OF GAME THEORY Game theory is a mathematical theory that is used for the analysis and resolution of conflict situations 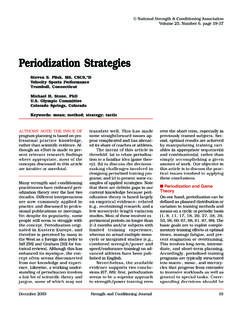 December 2003 Strength and Conditioning Journal 21 insights and diverse applications have made game theory enor-mously important. In fact, it has 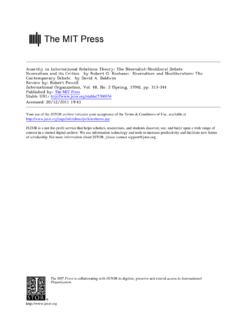 Anarchy in International Relations Theory: The … 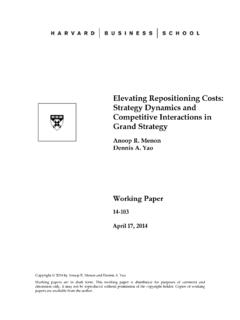 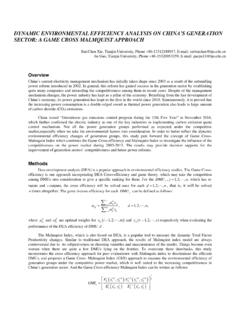 where t k11, 1 y k is the modified Game Cross-efficiency for DMU in period t under the production frontier of period t for the generation sector. Results