DEPARTMENT OF LABOR AND INDUSTRIAL …

2 Over-the-month initial claims dropped by percent and weeks claims increased by percent in July 2018. The unemployment rate figures for the State of Hawaii and the in this release are seasonally adjusted, in accordance with the Bureau of LABOR Statistics (BLS) methodology. The not seasonally adjusted rate for the State was percent in July, compared to the revised rate of percent in June. State of Hawaii Seasonally Adjusted LABOR Force Data**. Jul 2018 Jun 2018 Jul 2017*. LABOR Force 687,700 687,550 684,300. Employment 673,350 673,350 668,700. Unemployment 14,350 14,200 15,600. * benchmarked data **totals may not add due to rounding JUL JUN JUL*. 2018 2018 2017. Seasonally Adjusted STATE U. S. Not Seasonally Adjusted STATE HONOLULU HAWAII COUNTY KAUAI MAUI COUNTY Maui Island Molokai Lanai U. S. county & island rates are not seasonally adjusted * benchmarked data Industry Payroll Employment (Establishment Survey). In another measure of employment, there was an increase of 1,700 total nonagricultural jobs over-the-month.

6 This technique uses the history of the LABOR force data and the job count data to identify the seasonal movements and to calculate the size and direction of these movements. A seasonal adjustment factor is then developed and applied to the estimates to eliminate the effects of regular seasonal fluctuations on the data. Seasonally adjusted statistical series enable more meaningful data comparisons between months or with an annual average. Current Population (Household) Survey (CPS). A survey conducted for employment status in the week that includes the 12th day of each month generates the unemployment rate statistics, which is a separate survey from the Establishment Survey that yields the industry job counts. The CPS survey contacts approximately 1,000. households in Hawaii to determine an individual's current employment status. Employed persons consist of: 1) all persons who did any work for pay or profit during the survey reference week, 2) all persons who did at least 15 hours of unpaid work in a family-owned enterprise operated by someone in their household, and 3) all persons who were temporarily absent from their regular jobs, whether they were paid or not.

7 Persons considered unemployed are ones that do not have a job, have actively looked for work in the prior four weeks and are available for work. Temporarily laid off workers are counted as unemployed, whether they have engaged in a specific job seeking activity. Persons not in the LABOR force are those who are not classified as employed or unemployed during the survey reference week. Benchmark Changes to Local Area Unemployment Statistics Data Statewide and substate data for 2013-2017 have been re-estimated to reflect revised population controls, model reestimation and for seasonally adjusted data, new seasonal adjustment for 1976-2017. Change to Monthly Employment Estimates This release incorporates revised job count figures from 1990 through 2017 for the seasonally adjusted series. The reconstructed data reflects data from historical corrections applied to unadjusted supersector or sector level series. For years, analysts with the State DLIR's Research and Statistics Office have developed monthly employment estimates for Hawaii and our metropolitan areas.

8 These estimates were based on a monthly survey of Hawaii businesses and analysts' knowledge about our local economies. Beginning with the production of preliminary estimates for March 2011, responsibility for the production of State and metropolitan area (MSA) estimates was transitioned from individual state agencies to the Bureau of LABOR Statistics (BLS). For Hawaii, this means the transition of statewide, Honolulu and Kahului-Wailuku-Lahaina MSA. areas. State agencies will continue to provide the BLS with information on local events that may affect the estimates, such as strikes or large layoffs/hiring at businesses not covered by the survey and to disseminate and analyze the Current Employment Statistics (CES) estimates for local data users. BLS feels this change is designed to improve the cost efficiency of the CES. program and to reduce the potential bias in state and area estimates. A portion of the cost savings generated by this change is slated to be directed towards raising survey response rates in future years, which will decrease the level of statistical error in the CES estimates. 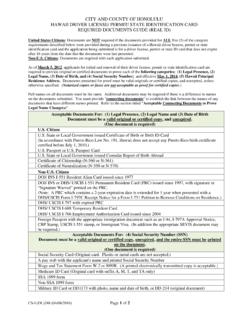 CITY AND COUNTY OF HONOLULU HAWAII … 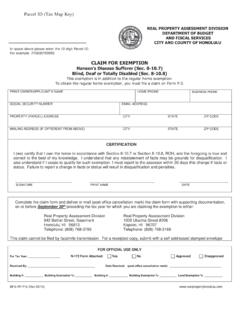 INSTRUCTIONS FOR FILING DISABILITY EXEMPTION FORMS You can file for disability within all counties that you own property. Contact the Real Property Assessment Division for … 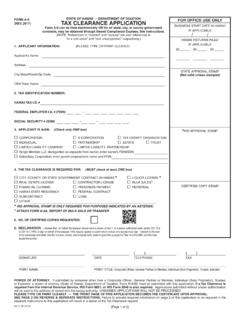 (Page 1 of 2) FORM A-6 FOR OFFICE USE ONLY (REV. 2017) STATE OF HAWAII — DEPARTMENT OF TAXATION TAX CLEARANCE APPLICATION Form A-6 can be filed electronically OR for all state, city, or county government