Depression Depression Depression . Depress Depression . M. ost people feel depressed at times. Losing a loved one, getting fired from a job, going through a divorce, and other difficult situations can lead a person to feel sad, lonely, scared, nervous, or anxious. Depression is more than just sadness. It interferes with daily A major depressive episode may include these symptoms: life and causes pain for you and everyone who cares about you. It's a common illness, but a very serious one. Persistent sad mood, most of the day, nearly every day Loss of interest or pleasure in hobbies and activities, The term Depression often characterizes feelings of being including sex sad, discouraged, hopeless, irritable, unmotivated, as well as a general lack of interest or pleasure in life. When these Feelings of guilt, worthlessness, helplessness feelings last for a short period of time, it may be called a Decreased energy, fatigue, feeling slowed down . passing case of the blues.

6 7 Depression and Anxiety Disorders D epression and anxiety disorders are not the same, but people with depression often experience nervousness, irritability, and problems sleeping

1 Depression Depression Depression . Depress Depression . M. ost people feel depressed at times. Losing a loved one, getting fired from a job, going through a divorce, and other difficult situations can lead a person to feel sad, lonely, scared, nervous, or anxious. Depression is more than just sadness. It interferes with daily A major depressive episode may include these symptoms: life and causes pain for you and everyone who cares about you. It's a common illness, but a very serious one. Persistent sad mood, most of the day, nearly every day Loss of interest or pleasure in hobbies and activities, The term Depression often characterizes feelings of being including sex sad, discouraged, hopeless, irritable, unmotivated, as well as a general lack of interest or pleasure in life. When these Feelings of guilt, worthlessness, helplessness feelings last for a short period of time, it may be called a Decreased energy, fatigue, feeling slowed down . passing case of the blues.

2 But it's likely to be a depressive Difficulty concentrating, remembering, making disorder when they last for more than two weeks and decisions interfere with regular daily activities. Insomnia, early-morning awakening, or excessive Depressive disorders, also known as mood disorders, sleeping include three main types: major Depression , persistent Low appetite and weight loss or overeating and weight depressive disorder, and bipolar disorder. Depressive gain disorders can affect people of any age, including children, Thoughts of death or suicide, suicide attempts teenagers, adults, and older adults. Restlessness or irritability Types of Depression Persistent depressive disorder, or PDD, is a form of Major Depression involves at least five of the symptoms Depression that usually continues for at least two years. listed below for a two-week period. Such an episode is Although it is less severe than major Depression , it involves disabling and will interfere with the ability to work, study, the same symptoms; sad mood combined with low energy, eat, and sleep.

3 Major depressive episodes may occur once poor appetite or overeating, and insomnia or oversleeping. or twice in a lifetime, or they may recur frequently. They It can show up as stress, irritability, and mild anhedonia, may also take place spontaneously, during or after the which is the inability to derive pleasure from most activities. death of a loved one, a romantic breakup, a medical illness, Bipolar disorder, once called manic Depression , is or other life event. Some people with major Depression may characterized by moods that shift from severe highs (mania). feel that life is not worth living and some will attempt to end or mild highs (hypomania) to severe lows ( Depression ). their lives. The mood episodes associated with the disorder persist from days to weeks or longer and may be dramatic. Severe changes in behavior go along with mood changes. Major Depression Persistent depressive disorder 2. Bipolar disorder 3. These periods of highs and lows can be distinct episodes Poor judgment recurring over time.

4 Or they may occur together in a mixed Spending sprees state: symptoms of mania and Depression experienced together. Symptoms often include agitation, trouble A lasting period of behavior that is different from usual sleeping, significant change in appetite, psychosis, and Increased sexual drive suicidal thinking. A person may have a very sad hopeless Abuse of drugs, particularly cocaine, alcohol, and mood even while feeling extremely energized. sleeping medications Mood swings from manic to depressive are often gradual, Provocative, intrusive, or aggressive behavior although they can also take place abruptly. Often people Denial that anything is wrong with bipolar disorder experience periods of normal mood in between mood episodes. During the depressive phase, a person experiences the symptoms of major Depression . A depressive episode is During the manic phase, a person may experience diagnosed if five or more primary depressive symptoms last abnormal or excessive elation, irritability, a decreased need most of the day, nearly every day, for a period of two weeks for sleep, grandiose notions, increased talkativeness, racing or longer.

5 Thoughts, increased sexual desire, markedly increased energy, poor judgment, and inappropriate social behavior. Signs and symptoms of a depressive episode can include the following: A manic episode is diagnosed if an elevated mood occurs with three or more primary symptoms present most of the Lasting sad or empty mood day, nearly every day, for at least one week. With an irritable Feelings of hopelessness or pessimism mood, four additional symptoms must be present for a diagnosis. Feelings of guilt, worthlessness, or helplessness Loss of interest or pleasure in activities once enjoyed, Signs and symptoms of a manic episode can include the including sex following: Decreased energy, a feeling of fatigue or of being Increased energy, activity, and restlessness slowed down . Excessively high, overly good, euphoric mood Difficulty concentrating, remembering, making decisions Extreme irritability Restlessness or irritability Racing thoughts and talking very fast, jumping from one idea to another Sleeping too much, or having trouble sleeping Distractibility, inability to concentrate well Change in appetite or unintended weight loss or gain Little sleep needed Thoughts of death or suicide Unrealistic beliefs in one's abilities and powers Suicide attempts manic increased energy depressive restlessness thoughts of death grandiose notions spending sprees mood swings pessimism 4.

7 Anxiety disorder (GAD), panic disorder and panic During adolescence, with its many personal and social attacks, agoraphobia, social anxiety disorder, changes, Depression can take hold. Persistent unhappiness selective mutism, separation anxiety, and specific or moodiness is not normal. Look for these symptoms: phobias. Obsessive-compulsive disorder (OCD) and posttraumatic stress disorder (PTSD) are closely Depressed or irritable mood related to anxiety disorders, which some may Inability to feel pleasure experience at the same time as Depression . Loss of interest in usual activities; withdrawal from friends Each disorder has its own causes and its own emotional Change in grades, getting into trouble at school, or and behavioral symptoms. Many people who develop refusing to go to school Depression have a history of an anxiety disorder earlier in Loss of appetite or eating too much life. There is no evidence one disorder causes the other, but there is clear evidence that many people suffer from Weight loss or weight gain both disorders.

8 The good news is that these disorders are Problems falling sleep, staying asleep, or sleeping too treatable, separately and together. much Feeling angry Mood swings Frequent sadness or crying Feeling worthless and guilty Treatable generalized anxiety disorder separation panic disorder posttraumatic stress disorder anxiety agoraphobia selective mutism social anxiety disorder specific phobias Depression 6 7. obsessive-compulsive disorder Lack of energy Postpartum Depression Low self-esteem F. Problems concentrating, remembering information, or ollowing childbirth, about 10 to 15 percent of making decisions women experience postpartum Depression , which is Depression associated with the aftermath of Aches, pains, headaches, cramps, or digestive problems pregnancy. About 30 to 70 percent experience symptoms that do not go away for one year or longer. Most women with postpartum Restlessness Depression are diagnosed with minor Depression , but Feeling hopeless and helpless 4 to 5 percent meet the criteria for major Depression .

9 Thoughts of death or suicide or suicide attempts Postpartum Depression is associated with severe and persistent symptoms that are present most of the day nearly Other disorders such as anxiety, disruptive behavior, eating every day for at least two weeks. It is also associated with disorders, or substance abuse may also occur at the same reduced mother-infant bonding and increased marital stress time. Treatment for Depression and related disorders is and divorce. essential. After one episode of Depression , a child is at risk for developing another within five years, which may predict Symptoms usually begin within the first four weeks of giving more severe illness as an adult. Depression in children, birth, although some women report decreasing mood in adolescents, and teens increases risk for suicide. the late third trimester of pregnancy. Below are common symptoms: CAUSES. Sad mood Depression is most likely due to a combination of genetic, biological, environmental, and psychological factors.

10 Brain- Loss of interest or imaging technologies, such as magnetic resonance imaging pleasure in things that (MRI), have shown that the parts of the brain involved in you normally enjoy mood, thinking, sleep, appetite, and behavior of people Fatigue or loss of who have Depression function differently than those of energy people without it. Appetite increase or Some types of Depression tend to run in families. Genetics decrease research indicates that risk for Depression results from Sleeping too much or insomnia several genes acting in concert with environmental and Feeling restless or as though you are slowed down other factors. Also, trauma, loss of a loved one, a difficult relationship, or any stressful situation may trigger a Feelings of worthlessness or excessive guilt depressive episode. Episodes may also occur without an Difficulty concentrating or indecisiveness obvious trigger. And the illness can occur in people without Thoughts of death or suicide or a suicide plan any family history. 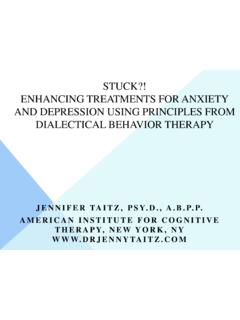 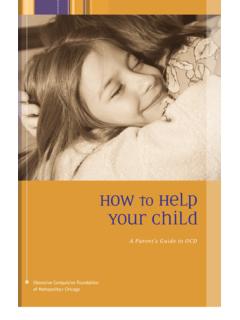 to Help Your Child - Home | Anxiety and Depression ... 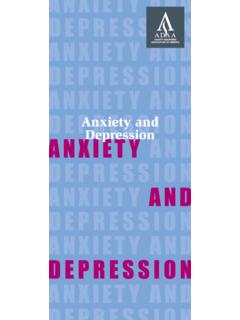 in reducing anxiety symptoms, and evidence for the use of acupuncture in treating anxiety disorders is becoming stronger. Yoga, which combines physical postures, breathing exercises, meditation, and a distinct philosophy, is one of the top ten CAM practices. 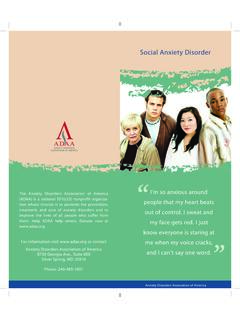 Social Anxiety Disorder Self-Test If you suspect that you might suffer from social anxiety disorder, answer the questions below, and share them with your health care professional. 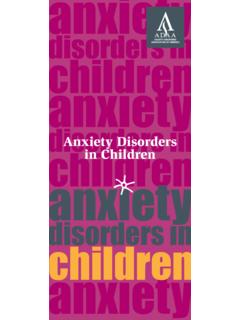 Anxiety disorders are common, treatable medical conditions that affect one in eight children. They are characterized by persistent, irrational, and 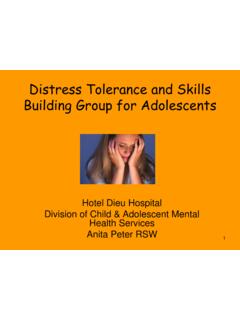 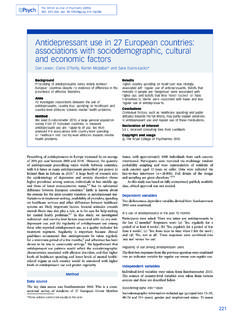 Antidepressant use in 27 European countries: associations ... 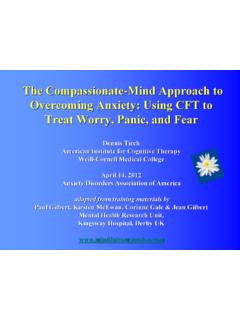 The Compassionate-Mind Approach to Overcoming Anxiety ... 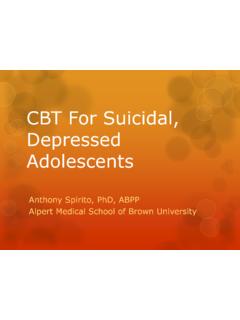 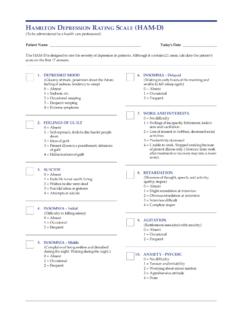 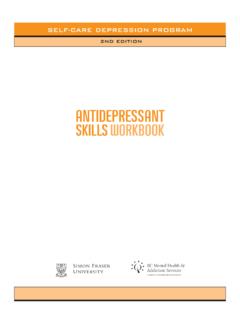 SELF-CARE DEPRESSION PROGRAM 2 ANTIDEPRESSANT SKILLS WORKBOOK Take a moment now to ask yourself three questions. Mark your answers on the …

2 EXECUTIVE SUMMARY This Postpartum Depression Literature Review of Risk Factors and Interventions, commissioned by Toronto Public Health, is a comprehensive review of the literature from 1990-2002 in four related areas: 1) 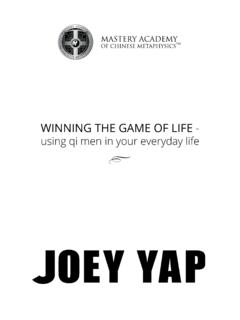 4 Please take note that the charts, esigns an terinologies use are oey aps original literary epression an are copyright protecte. eprouction of terinologies, layouts an esigns in any for without the epress written consent fro oey ap nternational iite is prohiite. 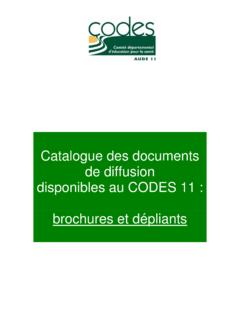