Designing Back Exercise: from Rehabilitation to Enhancing ...

1. Designing Back Exercise: from Rehabilitation to Enhancing Performance Stuart McGill, Professor of Spine Biomechanics, Faculty of Applied Health Sciences, Department of Kinesiology, University of Waterloo Many have asked me to write a short overview to assist increasing Resources: the competency of clinicians. But after writing two textbooks based on our hundreds of scientific publications, I feel as though I have McGill, (2007) already said what is necessary and important in a cohesive story. Low back disorders: Evidence based Here are few thoughts for exercise professionals who deal with prevention and issues related to the assessment and design of therapeutic exercise Rehabilitation , Second for the back, to assist them in becoming elite professionals.

1 1. Designing Back Exercise: from Rehabilitation to Enhancing Performance Stuart McGill, Professor of Spine Biomechanics, Faculty of Applied Health Sciences, Department of Kinesiology, University of Waterloo Many have asked me to write a short overview to assist increasing Resources: the competency of clinicians. But after writing two textbooks based on our hundreds of scientific publications, I feel as though I have McGill, (2007) already said what is necessary and important in a cohesive story. Low back disorders: Evidence based Here are few thoughts for exercise professionals who deal with prevention and issues related to the assessment and design of therapeutic exercise Rehabilitation , Second for the back, to assist them in becoming elite professionals.

2 Many Edition, Human clinicians follow a recipe for assessment, treatment or performance Kinetics Publishers, training. Using this generic approach ensures average results . Champaign, IL, some patients/clients will improve and get better, but many will fail McGill, (2007) simply because the approach was above or below the optimum level (DVD) The Ultimate necessary to address the deficit. The program and approach Back: Assessment and introduced here will help you to become an elite corrective exercise therapeutic execise, and training specialist. Invest the effort to enhance your knowledge and techniques and you will have success where others have failed.

3 McGill, (2009) Many times, we have had a breakthrough with an influential client . Ultimate back fitness be they a pro athlete or business person. Subsequently they become and performance . your best referral service. Fourth Edition, Backfitpro Inc. Waterloo, Canada ( ). The cause (and elimination of it). The first step in any exercise progression is to remove the cause of the pain, namely the perturbed motion and motor patterns. For example, the flexion intolerant back is very common in todays society. Giving this type of client stretches such as pulling the knees to the chest may give the perception of relief (via the stimulation of erector spinae muscle stretch receptors) but this approach only guarantees more pain and stiffness the following day as the underlying tissues sustain more cumulative damage.

4 Eliminating spine flexion, particularly in the morning when the discs are swollen from the osmotic superhydration of the disc that occurs with bedrest, has been proven very effective with this type of patient. Realize that the spine discs only have so many numbers of bends before they damage. Keep the bends for essential tasks such as tying shoes rather than using them up in abdominal training. Many lifestyle and occupational examples are provided in the textbook Low back disorders: Evidence based prevention and Rehabilitation to guide the elimination of the cause of a clients back troubles the clinician will find that half of 2.

5 Their initial effectiveness will be due to preventing the cause (ie, a flawed movement pattern)! This need not be so complicated. Consider the client who stands slouched where the back muscles are chronically contracted to the point of chronic muscle pain. The family doc typically prescribes muscle relaxants which fail to work. The clinician addresses the postural cause and corrects standing to shut the muscles off and remove the associated crushing load from the spine. The client exclaims, You're magical you just took the ache out of my back . Building the scientific foundation: Myths and controversies regarding spine function and injury mechanisms are common.

6 Consider the cause of back troubles, specifically the common perception regarding common injury pathways in which the back is hurt in an event . Generally statistics are compiled from epidemiological approaches which ignore the large role of cumulative trauma. Compensation board data is often used however, and they ask clinicians to fill out reports and name the event that caused the injury . For example, Mr X lifted and twisted at the time that the injury occurred. Kinesiologists and clinicians know that twisting is different from generating twisting torque, but very few of the individuals filling out the reports will know.

7 So, was it twisting torque? Or, was it being twisted, that caused the injury? Further, despite the injury reporting system geared to the reporting of the event associated with the injury , very few back injuries occur this way. Evidence of the process of disc herniation provides a proof of principle. For example the damaging mechanism leading to herniation, or prolapse, is repeated lumbar flexion requiring only very modest concomitant compressive loads (Callaghan and McGill, 2001). This trauma accumulates with little indication to the future patient. With repeated flexion cycles the annulus breaches layer by layer with progressive delamination of the layers (Tampier et al 2007).

8 This allows gradual accumulation of nucleus material between the delaminated layers. The location of the annulus breaches can be predicted by the direction of the bend. Specifically, a left posterior-lateral disc bulge will result if the spine is flexed with some additional right lateral bend (Aultman et al, 2004). Subsequent twisting leads circumferential rents in the annulus that tends to make McKenzie extension approaches for these clients useless, or even exacerbating (Marshall and McGill, 2010). This is critical information for the clinician, both in terms of prevention and in treatment. Avoiding this specific directional cause will lead to optimal therapeutic exercise design together with elimination of activities in the patient's daily routine identified as replicating the cause.

9 Many therapy approaches have the objectives of strengthening muscle and increasing spine range of motion. This is problematic (Parks et al, 2003) since those who have more motion in their backs have a greater risk of having future back troubles. Strength may, or may not, help a particular individual as strength without control and endurance to repeatedly execute perfect form increases risk. Interestingly, the differences between many troubled backs (the chronic back with recurrent episodes) and matched asymptomatic controls performing the same jobs have been shown to be variables other than strength or mobility.

10 Rather deficits in motion and motor patterns have been documented as being more critical and thus should be targets for therapeutic exercise. For example, people with troubled backs use their backs more. Generally, they walk, sit, stand and lift using mechanics that increase back loads. Many of them have stronger backs but are less endurable than matched asymptomatic controls (McGill et al, 2003). They tend to have more motion in their backs and less motion and load in their hips. A common aberrant motor pattern is known as gluteal amnesia (McGill, 2007) which may be both a 3. common consequence of back troubles and probably a cause of them as well.

Designing Back Exercise: from Rehabilitation to …

XXXII Clinical Rehabilitation chained in predetermined sequences; why needle ap-plication in a single point has functional consequen-ces in a completely distant area of the body including 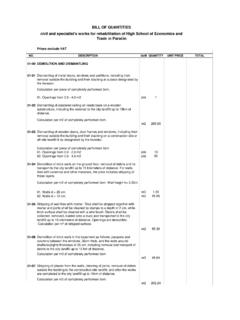 BILL OF QUANTITIES civil and specialist's works for ...

Prices exclude VAT NO. DESCRIPTION UoM QUANTITY UNIT PRICE TOTAL 01-00 DEMOLITION AND DISMANTLING 01-01 Dismantling of metal doors, windows and partitions, including their removal outside the building and their stacking at a place designated by