2 EN 954, under the Machinery Directive, has a different categorisation system for Safety -related devices. A categorisation system needs to be developed which is compatible with these and with standards for Safety -critical control systems, such as IEC 61508. Objectives (1) To draft a description of appropriate subdivisions of Safety devices. (2) To define all Safety devices which are used in the context of electrical equipment for use in potentially explosive atmospheres and study their characteristics and performance in terms of the defined subdivisions. (3) To draft a method for identifying when a particular subdivision should be used, taking into account the application and working environment of the equipment. (4) To determine the correspondence between the proposed subdivisions and the relevant essential Safety requirements.

3 Work programme Task 1 was to derive target failure measures in the context of the ATEX requirements. Task 2. was to assess standards such as EN 954 and IEC 61508 for suitability in specifying and certifying that the required target failure measures have been achieved. Task 3 was to identify the types of Safety devices which are currently in use. Task 4 was to study these Safety devices to determine their characteristics and performance in relation to the target failure measures. Task 5 was to determine a methodology for testing, validation and certification. Task 6 was to prepare the current report and proposals for standardisation. Results and Achievements Three types of Safety device have been identified: (1) those which are fully specified by the relevant CENELEC standards; (2) simple devices which can be specified according to EN 954.

4 And (3) complex/ programmable devices which should be specified according to IEC 61508. For simple devices, the EN 954 Categories which correspond to the fault tolerance requirements of the ATEX Directive have been defined. For complex/ programmable devices, Safety integrity level (SIL) as defined by IEC 61508 is a suitable target failure measure. However, it will also be necessary to define additional fault tolerance requirements to conform with the ATEX. Directive. Risk reduction targets for Safety functions have been calibrated by considering individual risk criteria, accident statistics and the performance of existing Safety devices. Good agreement was achieved between these different calibration methods. Risk reduction requirements have been defined for the Safety function of explosion prevention for each hazardous zone in terms of Safety integrity level (SIL), SIL3 in zone 0; SIL2 in zone 1 and SIL1 in zone 2.

5 The SIL target for a particular Safety device may be less than this as the requirement can be allocated between the Safety device and the rest of the equipment. A. certification scheme has been proposed. 3. CONTENTS. Summary 2. 1. Introduction 4. Background 4. The SAFEC project 4. Scope 5. Liaison with CENELEC and CEN 6. 2. Identification of Safety devices 6. 3. Review of control system standards 7. EN 954-1 requirements 8. IEC 61508 requirements 8. Summary of the standards with respect to the ATEX. Directive 10. 4. Choice of target failure measures 12. Types of target failure measure 13. Discussion 12. 5. Calibration of SIL requirements for complex and/or programmable Safety devices 14. Introduction 14. Use of individual risk criteria 16.

7 Annex D Report on Task 4. Study of Used Safety Devices' D1. Annex E Report on task 5. Methodology for testing, validation and Certification E1. 4. 1. INTRODUCTION. Background Electrical apparatus, which is intended for use in potentially explosive atmospheres, sometimes relies on the correct operation of control or protective devices in order to maintain certain characteristics of the apparatus within acceptable limits. Examples of such devices are motor protection circuits (to limit temperature rise during stall conditions) and overpressurisation protection. The approval and certification of electrical apparatus for potentially explosive atmospheres, therefore, requires that, where such control and protection devices are used, an assessment be made of their suitability for the intended purpose.

8 This will need to be expressed in terms of some measure of confidence that the devices will be able to maintain a required level of Safety at all times. This measure of confidence needs to be compatible with the EC ATEX Directive (1), CENELEC standards (2-15) for electrical apparatus for use in potentially explosive atmospheres and relevant control system standards, (16,17). CENELEC identified the need for research to determine whether existing and proposed standards in the field of Safety -related control systems are suitable for this purpose, and to develop a methodology which will provide the required support for the approval and certification process. Research proposals on this topic were invited under the Standardisation, Measurement and Testing (SMT) Programme and the SAFEC project was selected for funding.

9 The project began in January 1999 and the end date, after agreed extension, is May 2000. The SAFEC project The SAFEC project (contract SMT4-CT98-2255) had the overall objective to produce a harmonised system for subdivision of Safety devices which are used in potentially explosive atmospheres, together with a methodology for selecting the appropriate subdivision of Safety device for any particular application. The SAFEC partners were the Health and Safety Laboratory of the Health and Safety Executive (HSL) in the UK (the project coordinator), the Deutsche Montan Technologie (DMT) in Germany, the National Institute for Industrial Environment and Risks (INERIS) in France and the Laboratorio Oficial Madariaga (LOM) in Spain. The SAFEC project comprised six tasks: 1.

10 Derivation of target failure measures (all/HSL). 2. Assessment of current control system standards with reference to the target failure measures from Task 1 (HSL). 5. 3. Identification of Safety devices currently used with reference to CENELEC standards (LOM). 4. Study "used Safety devices" identified in Task 3 (INERIS). 5. Determination of a methodology for testing, validation and certification (DMT). 6. Production of a final report including a proposal for incorporation in European standards (all/HSL). The reports on these project tasks form Annexes A-E, respectively, to this final report on the project. Scope The scope of the SAFEC project was limited to: a) Electrical apparatus which comes under the requirements of the ATEX Directive (1), the focus was on what can be done by the manufacturer of equipment which is for sale (rather than on what should be done by the user of equipment and covered under the 118A Directive (18)). 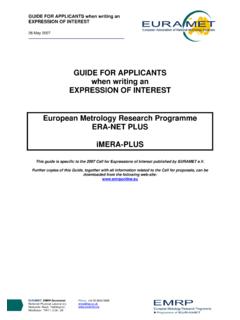 GUIDE FOR APPLICANTS when writing an … 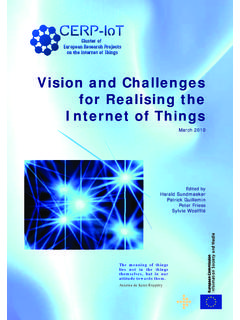 Vision and Challenges for Realising the Internet of … 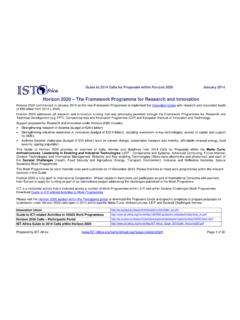 Horizon 2020 The Framework Programme for … 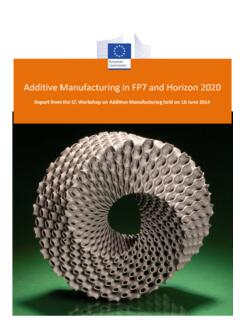 Additive Manufacturing in FP7 and Horizon 2020

Welcome from the Director for Key Enabling Technologies DG Research and Innovation - European Commission Additive Manufacturing (AM), including 3D-Printing, is one of the 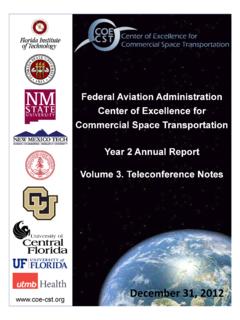 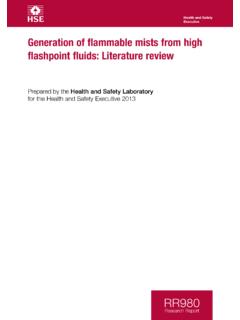 Generation of flammable mists from high …