2 Human health also has to be protected and an overall strategy that in particular restricts the use of cadmium and stimulates research into substitutes should Having regard to the opinion of the Committee of Regions (2), therefore be implemented. The Resolution stresses that the use of cadmium should be limited to cases where suitable alternatives do not exist. Acting in accordance with the ordinary legislative procedure (3), (6) Regulation (EC) No 850/2004 of the European Whereas: Parliament and of the Council of 29 April 2004 on persistent organic pollutants (7) recalls that the objective of protecting the environment and human health from (1) A number of substantial changes are to be made to persistent organic pollutants cannot be sufficiently Directive 2002/95/EC of the European Parliament and achieved by the Member States, owing to the trans.

3 Of the Council of 27 January 2003 on the restriction boundary effects of those pollutants, and can therefore of the use of certain hazardous substances in electrical be better achieved at Union level. Pursuant to that Regu . and electronic equipment (4). In the interest of clarity, lation, releases of persistent organic pollutants, such as that Directive should be recast. dioxins and furans, which are unintentional by-products of industrial processes, should be identified and reduced as soon as possible with the ultimate aim of elimination, (2) The disparities between the laws or administrative where feasible. measures adopted by the Member States regarding the restriction of the use of hazardous substances in electrical and electronic equipment (EEE) could create barriers to trade and distort competition in the Union and may (7) The available evidence indicates that measures on the thereby have a direct impact on the establishment and collection, treatment, recycling and disposal of waste functioning of the internal market.

4 It therefore appears EEE as set out in Directive 2002/96/EC of the necessary to lay down rules in this field and to contribute European Parliament and of the Council of 27 January to the protection of human health and the environ 2003 on waste electrical and electronic equipment mentally sound recovery and disposal of waste EEE. (WEEE) (8) are necessary to reduce the waste management problems associated with the heavy metals and flame retardants concerned. In spite of those measures, (3) Directive 2002/95/EC provides that the Commission however, significant parts of waste EEE will continue to shall review the provisions of that Directive , in particular, be found in the current disposal routes inside or outside in order to include in its scope equipment which falls the Union.

5 Even if waste EEE were collected separately within certain categories and to study the need to adapt and submitted to recycling processes, its content of the list of restricted substances on the basis of scientific mercury, cadmium, lead, chromium VI, polybrominated progress, taking into account the precautionary principle, biphenyls (PBB) and polybrominated diphenyl ethers as endorsed by Council Resolution of 4 December 2000. (PBDE) would be likely to pose risks to health or the environment, especially when treated in less than optimal conditions. (1) OJ C 306, , p. 36. (2) OJ C 141, , p. 55. (3) Position of the European Parliament of 24 November 2010 (not yet (5 ) OJ L 312, , p. 3. published in the Official Journal) and decision of the Council of (6 ) OJ C 30, , p. 1.

6 27 May 2011. (7 ) OJ L 158, , p. 7. (4) OJ L 37, , p. 19. (8 ) OJ L 37, , p. 24. EN Official Journal of the European Union L 174/89. (8) Taking into account technical and economic feasibility, (13) Directive 2009/125/EC of the European Parliament and including for small and medium sized enterprises (SMEs), of the Council of 21 October 2009 establishing a the most effective way of ensuring a significant reduction framework for the setting of ecodesign requirements of risks to health and the environment relating to those for energy-related products (2) enables specific ecodesign substances, in order to achieve the chosen level of requirements to be set for energy-related products which protection in the Union, is the substitution of those may also be covered by this Directive .

7 Directive substances in EEE by safe or safer materials. Restricting 2009/125/EC and the implementing measures adopted the use of those hazardous substances is likely to pursuant to it are without prejudice to Union waste enhance the possibilities and economic profitability of management legislation. recycling of waste EEE and decrease the negative impact on the health of workers in recycling plants. (14) This Directive should apply without prejudice to Union legislation on safety and health requirements and specific (9) The substances covered by this Directive are scientifically Union waste management legislation, in particular well researched and evaluated and have been subject to Directive 2006/66/EC of the European Parliament and different measures both at Union and at national level.

8 Of the Council of 6 September 2006 on batteries and accumulators and waste batteries and accumulators (3). and Regulation (EC) No 850/2004. (10) The measures provided for in this Directive should take into account existing international guidelines and recom . mendations and should be based on an assessment of available scientific and technical information. The (15) The technical development of EEE without heavy metals, measures are necessary to achieve the chosen level of PBDE and PBB should be taken into account. protection of human health and the environment, with due respect for the precautionary principle, and having regard to the risks which the absence of measures would be likely to create in the Union. The measures should be (16) As soon as scientific evidence is available, and taking into kept under review and, if necessary, adjusted to take account the precautionary principle, the restriction of account of available technical and scientific information.

9 Other hazardous substances, including any substances of The annexes to this Directive should be reviewed peri very small size or with a very small internal or surface odically to take into account, inter alia, Annexes XIV and structure (nanomaterials) which may be hazardous due to XVII to Regulation (EC) No 1907/2006 of the European properties relating to their size or structure, and their Parliament and of the Council of 18 December 2006 substitution by more environmentally friendly alter . concerning the Registration, Evaluation, Authorisation natives which ensure at least the same level of protection and Restriction of Chemicals (REACH) and establishing of consumers should be examined. To this end, the a European Chemicals Agency (1). In particular, the risks review and amendment of the list of restricted substances to human health and the environment arising from the in Annex II should be coherent, maximise synergies with, use of Hexabromocyclododecane (HBCDD), Bis (2- and reflect the complementary nature of the work carried ethylhexyl) phthalate (DEHP), Butyl benzyl phthalate out under other Union legislation, and in particular (BBP) and Dibutyl phthalate (DBP) should be considered under Regulation (EC) No 1907/2006 while ensuring as a priority.

10 With a view to further restrictions of the mutually independent operation of this Directive substances, the Commission should re-investigate the and that Regulation. Consultation with the relevant stake . substances that were subject to previous assessments, in holders should be carried out and specific account should accordance with the new criteria set out in this Directive be taken of the potential impact on SMEs. as part of the first review. (17) The development of renewable forms of energy is one of (11) This Directive supplements the general Union waste the Union's key objectives, and the contribution made by management legislation, such as Directive 2008/98/EC renewable energy sources to environmental and climate and Regulation (EC) No 1907/2006. objectives is crucial. 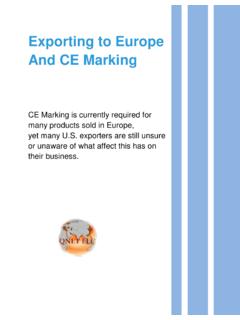 Exporting to Europe and CE Marking

Exporting to Europe . And CE Marking . CE Marking is currently required for many products sold in Europe, yet many U.S. exporters are still unsure 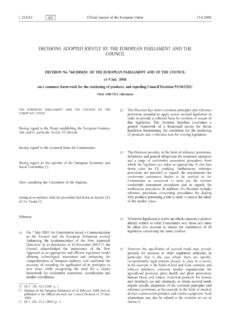 DECISIONS ADOPTED JOINTLY BY THE EUROPEAN … 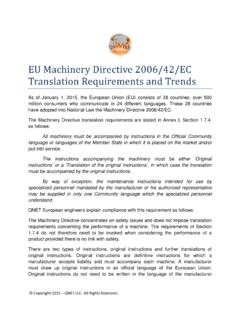 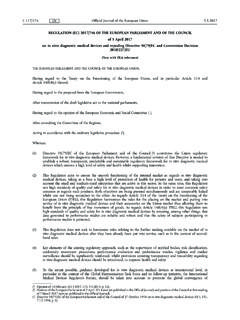 Regulation. Parliament and of the Council (). ). EN Official Jour nal of the European Union (( 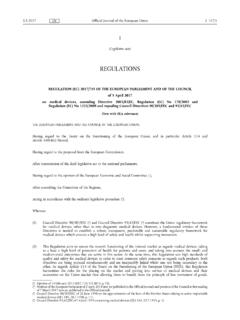 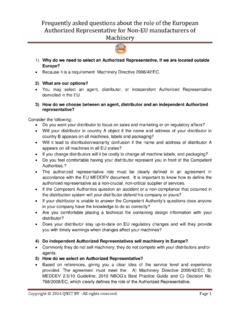 Frequently asked questions about the role of the … 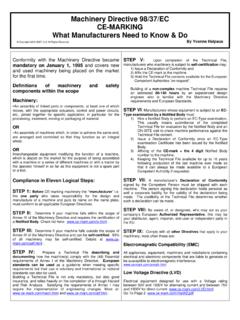 Conformity with the Machinery Directive became mandatory on January 1, 1995 and covers new and used machinery being placed on the market for the first time.

STATUTORY INSTRUMENTS 2012 No. 3032 ENVIRONMENTAL PROTECTION The Restriction of the Use of Certain Hazardous Substances in Electrical and Electronic Equipment Regulations 2012

EN 5 EN RoHS 2 is also consistent with other product-related legislation, such as Directive 2012/19/EU of the European Parliament and of the Council on waste electrical and electronic

The adopted Act of 2 April 2007 for Resource Recycling of Electrical and Electronic Equipment and Vehicles 7. "Energy Recovery" (에너지회수) means any activity of recovering energy stipulated in

Material Recycling and Flow of Waste Electrical and ... 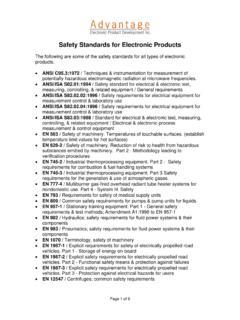 Page 1 of 9 Safety Standards for Electronic Products The following are some of the safety standards for all types of electronic products. • ANSI C95.3:1972 / Techniques & instrumentation for measurement of potentially hazardous electromagnetic radiation at microwave frequencies.