5 1341. Chapter 17. Consecration of Diaconal Ministries Deacons and 1351. Chapter 18. Installation of New Pastor .. 1361. Chapter 19. Installation of Church Officers and Committees .. 1371-1372. Chapter 20. Installation of Sunday School and VBS Teachers and Workers .. 1381-1382. Chapter 21. Groundbreaking .. 1391. Chapter 22. Laying the Cornerstone of a Church .. 1401. Chapter 23. Dedication of a Church .. 1411. INDEX. 4|P a g e HISTORICAL STATEMENT. 5|P a g e HISTORICAL STATEMENT. 1. The doctrine and spirit of pure Bible Christianity have existed at different times and in different degrees in all branches of the church of Christ. 2. In 1729 two young men in England, reading the Bible, saw that they could not be saved without holiness, followed after it, and incited others so to do. In 1737 they saw likewise that men are justified before they are sanctified; but still holiness was their object.

6 God then thrust them out to raise up a holy people.. 3. This was the rise of Methodism as described in the words of its founders, John and Charles Wesley. The name Methodist was applied to a group of students led by the Wesleys and George Whitefield in the University of Oxford, England, who came together for intellectual and spiritual improvement. Their systematic way of living merited the name, which was given them by fellow students. 4. On the evening of May 24, 1738, John Wesley had undergone his heart-warming experience at a meeting of a religious society on Aldersgate Street, in London; an experience which his brother, Charles, had previously found. About a quarter of nine, while listening to Luther's description of the change, which God works in the heart through faith in Christ, he says: I felt my heart strangely warmed.

7 I felt I did trust in Christ alone for salvation; an assurance was given me that He had taken away my sins, even mine, and saved me from the law of sin and death.. 5. The original associations formed by Mr. Wesley and his preachers were called societies. They were voluntary associations of persons for mutual improvement in experimental and vital piety. They were still members of the Church of England; they attended its regular services and received the sacraments at its altars. A great revival began to spread over the British realm. It was a work of great depth and duration. To the Methodists God committed the precious work of awakening the British Kingdom to a sense of God and duty, and by them He wrought a reformation which stands alone as a spiritual revival without admixture of statecraft or patronage, or parliament or king.

8 6. The first Methodist Society was organized in 1739 when eight or ten persons, who appeared to be deeply convinced of sin and earnestly groaning for redemption, came to John Wesley. They desired, as did two or three more the next day, that he would spend some time with them in prayer and advise them how to flee from the wrath to come. That they might have more time for this great work, he appointed a day when they might all come together, which from thence forward they did every week, namely, on Thursday in the evening. Their number increased daily. To all these he gave advice, which he judged most needful for them, and they always concluded their meetings with prayer suited to their several necessities. 7. After this rise of the United Societies in Europe, the spiritual movement fostered by them spread to America.

9 In 1766 Philip Embury, a local preacher from Ireland, began to preach in New York City and formed a Society in the John Street Church. Another local preacher, Thomas Webb, a captain in the British Army, soon joined him and began preaching. About the same time, Robert Strawbridge, from Ireland, settled in Frederick County, Maryland, preaching there and forming societies. 8. In 1769 Wesley sent Richard Broadman and Joseph Pilmore to America and two years later Francis Asbury, who was to become the most memorable and influential man in American Methodism. Wesley ordained Thomas Coke and gave him authority to exercise the office of a bishop, calling him a superintendent, which is only another name for the same thing. Dr. Coke was sent to America with authority to ordain Asbury to the same Episcopal office. These two were to give general superintendency of all the Methodist societies in America.

10 9. The first Annual Conference of American Methodism was held in Philadelphia in 1773. The business was simple and brief. It consisted mainly in the agreement of the preachers to abide by the doctrines and Discipline of Mr. Wesley. There were ten traveling preachers, six circuits, and one thousand, one hundred and sixty members. The first circuit was organized in North Carolina and was called the Carolina Circuit. During a one year period, in 1777 and 1778, eighteen hundred souls were added to the societies. The work was signally owned of God; at the close of the War of the Revolution the number of traveling preachers was about eighty, and the members in the societies were about fifteen thousand. 10. When the independence of the United States was acknowledged by the Treaty of 1783, the American Methodists, most of whom had been members of the Church of England, were, according to the declaration of Mr.

5 ACKNOWLEDGEMENT In view of the accelerated progress and stupendous achievements inaugurated by the Church Of God In Christ within the last two decades, a new and comprehensive

AN EFFECTIVE L A Y P E R S O N teach, enlighten, review and enhance those who designed and presented by The contents of this booklet have been garnered

2018 Spring Issue Special Convention Edition Minnesota Northern Light See, I have inscribed you on the palms of my hands. (Isaiah 49:16a NKJV) Call To Convention 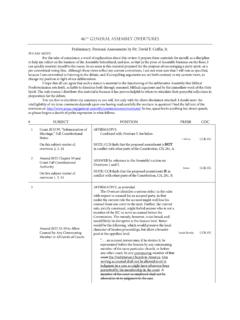 46th GENERAL ASSEMBLY OVERTURES Preliminary, Personal Assessments by Dr. David F. Coffin, Jr. PLEASE NOTE: For the sake of conscience, a word of explanation about this review: I prepare these materials for myself, as a discipline