study GUIDED iscover CanadaThe Rights and Responsibilities of CitizenshipC&I-1049-E-09-09 The Oathof CitizenshipI swear (or affirm) That I will be faithfulAnd bear true allegianceTo Her Majesty Queen Elizabeth the SecondQueen of CanadaHer Heirs and SuccessorsAnd that I will faithfully observeThe laws of CanadaAnd fulfil my duties as a Canadian de citoyennet Je jure (ou j affirme solennellement)Que je serai fid leEt porterai sinc re all geance Sa Majest la Reine Elizabeth DeuxReine du Canada ses h ritiers et successeursQue j observerai fid lement les lois du CanadaEt que je remplirai loyalement mes obligationsde citoyen us serve you better!Tell us what you think of this publication at Minister of Public Works and Government Services Canada , 2009 This document is available in multiple formats upon No. Ci1-11/2009 EISBN 978-1-100-12739-2 Message to Our ReadersWelcome! It took courage to move to a new country. Your decision to apply for citizenshipis another big step.

STUDY GUIDE Discover Canada The Rights and Responsibilities of Citizenship C&I-1049-E-09-09. The Oathof Citizenship I swear (or affirm) That I will be faithful And bear true allegiance

1 study GUIDED iscover CanadaThe Rights and Responsibilities of CitizenshipC&I-1049-E-09-09 The Oathof CitizenshipI swear (or affirm) That I will be faithfulAnd bear true allegianceTo Her Majesty Queen Elizabeth the SecondQueen of CanadaHer Heirs and SuccessorsAnd that I will faithfully observeThe laws of CanadaAnd fulfil my duties as a Canadian de citoyennet Je jure (ou j affirme solennellement)Que je serai fid leEt porterai sinc re all geance Sa Majest la Reine Elizabeth DeuxReine du Canada ses h ritiers et successeursQue j observerai fid lement les lois du CanadaEt que je remplirai loyalement mes obligationsde citoyen us serve you better!Tell us what you think of this publication at Minister of Public Works and Government Services Canada , 2009 This document is available in multiple formats upon No. Ci1-11/2009 EISBN 978-1-100-12739-2 Message to Our ReadersWelcome! It took courage to move to a new country. Your decision to apply for citizenshipis another big step.

2 You are becoming part of a great tradition that was built by generations ofpioneers before you. Once you have met all of the legal requirements, we hope to welcome youas a new citizen with all the rights and responsibilities of has welcomed generations of newcomersto our shores to help us build a free, law-abiding,and prosperous society. For 400 years, settlersand immigrants have contributed to the diversityand richness of our country, which is built on aproud history and a strong identity. Canada is a constitutional monarchy, aparliamentary democracy, and a federal are bound together by a sharedcommitment to the rule of law and to theinstitutions of parliamentary government. Canadians take pride in their identity and havemade sacrifices to defend their way of life. Bycoming to Canada and taking this important steptoward Canadian citizenship, you are helping towrite the continuing story of between the ages of 18 and 54 musthave adequate knowledge of English or French inorder to become Canadian citizens.

3 You must alsolearn about voting procedures, Canada s history,symbols, democratic institutions, geography, andthe rights and responsibilities of citizens enjoy many rights, butCanadians also have responsibilities. They mustobey Canada s laws and respect the rights andfreedoms of others. This guide will help you prepare to become aCanadian citizen. Good luck!For information about Citizenship and ImmigrationCanada, visit our website at Discover CanadaYour Canadian CitizenshipStudy GuideContentsApplying for Citizenship .. 6 Rights and Responsibilities of Citizenship .. 8 Who We Are .. 10 Canada s History .. 14 Modern Canada .. 24 How Canadians Govern Themselves .. 28 Federal Elections .. 30 Voting Procedures during an Election Period .. 32 The Justice System .. 36 Canadian Symbols .. 38 Canada s Economy .. 42 Canada s Regions .. 44 The Atlantic Provinces .. 46 Ontario and Quebec .. 47 The Prairie Provinces.

4 48 The West Coast .. 49 The Northern Territories .. 50 For More Information .. 52 Discover CanadaYour Canadian CitizenshipStudy GuideApplying for Citizenship When you apply for citizenship, officials will check your status, verify that you are not prohibited fromapplying, and ensure that you meet the requirements. Your application may take several months. Please ensure that the Call Centre always has your correctaddress while your application is being processed. See page 52 for telephone TO USE THIS BOOKLET TOPREPARE FOR THE CITIZENSHIP TEST This booklet will help you prepare for thecitizenship test. You should: study this guide ; Ask a friend or family member to help youpractise answering questions about Canada ; Call a local school or school board, a college,a community centre or a local organizationthat provides services to immigrants and askfor information on citizenship classes; Take English or French language classes,which the Government of Canada offers free THE CITIZENSHIP TEST The citizenship test is usually a written test, but itcould be an interview.

5 You will be tested on twobasic requirements for citizenship: 1) adequateknowledge of English or French, and 2)knowledge of Canada and of the rights andresponsibilities of citizenship. People betweenthe ages of 18 and 54 must write the citizenshiptest. Anyone under the age of 18 or over the ageof 54 does not need to write the test. You must also answer enough questions correctlyto achieve a passing mark. The questions arechosen from the following topics: The rights and responsibilities of citizenship; Canada s government, history, symbols, andgeography; Voting procedures and how to register yourselfas a take the oathDiscover Canada7 AFTER THE TESTIf you pass the test and meet all the otherrequirements, you will receive a Notice to Appearto Take the Oath of Citizenship. This documenttells you the date, time and place of yourcitizenship the ceremony, you will: Take the Oath of Citizenship; Sign the oath form; and Receive your Canadian Citizenship you do not pass the test, you will receive anotification indicating the next are encouraged to bring your family and friends to celebrate this , these secure for Canadians an 800-year-old tradition of ordered liberty, which datesback to the signing of Magna Cartain 1215 inEngland (also known as the Great Charter ofFreedoms), including: Freedom of conscience and religion; Freedom of thought, belief, opinion, andexpression, including freedom of speech andof the press; Freedom of peaceful assembly.

6 And Freedom of corpus, the right to challenge unlawfuldetention by the state, comes from Englishcommon Constitution of Canada was amended in 1982 to entrench the Canadian Charter of Rightsand Freedoms, which begins with the words, Whereas Canada is founded upon principlesthat recognize the supremacy of God and the ruleof law. This phrase underlines the importance ofreligious traditions to Canadian society and thedignity and worth of the human Charter attempts to summarize fundamentalfreedoms while also setting out additional most important of these include: Mobility Rights Canadians can live and workanywhere they choose in Canada , enter andleave the country freely, and apply for apassport. Aboriginal Peoples Rights The rightsguaranteed in the Charter will not adverselyaffect any treaty or other rights or freedoms ofAboriginal peoples. Official Language Rights and MinorityLanguage Educational Rights French andEnglish have equal status in Parliament andthroughout the Government.

7 Multiculturalism A fundamental characteristicof the Canadian heritage and celebrate the gift of one another spresence and work hard to respect pluralismand live in Canadian CitizenshipStudy GuideRights and Responsibilitiesof Citizenship Canadian citizens have rights and responsibilities. These come to us from our history, are secured byCanadian law, and reflect our shared traditions, identity, and values. Canadian law has several sources, including laws passed by Parliament and the provincial legislatures,English common law, the civil code of France, and the unwritten constitution that we have inherited from Great Elizabeth IIproclaiming theamended Constitution,Ottawa, 1982 Citizenship ResponsibilitiesIn Canada , rights come with include: Obeying the law One of Canada s foundingprinciples is the rule of law. Individuals andgovernments are regulated by laws and not byarbitrary actions. No person or group is abovethe law.

8 Taking responsibility for oneself and one sfamily Getting a job, taking care of one sfamily and working hard in keeping with one sabilities, are important Canadian values. Workcontributes to personal dignity and self -respect,and to Canada s prosperity. Serving on a jury When called to do so, you arelegally required to serve. Serving on a jury is aprivilege that makes the justice system work, as itdepends on impartial juries made up of citizens. Voting in elections The right to vote comeswith a responsibility to vote in federal,provincial or territorial, and local elections. Helping others in the community Millions ofvolunteers freely donate their time to helpothers without pay helping people in need,assisting at your child s school, volunteeringat a food bank or other charity, or encouragingnewcomers to integrate. Volunteering is anexcellent way to gain useful skills and developfriends and contacts.

9 Protecting and enjoying our heritage andenvironment Every citizen has a role to playin avoiding waste and pollution whileprotecting Canada s natural, cultural, andarchitectural heritage for future Equality of Women and MenIn Canada , men and women are equal under the law. Canada s openness and generosity do not extendto barbaric cultural practices that tolerate spousal abuse, honour killings, female genital mutilation, or other gender-based violence. Those guilty of these crimes are severely punished under Canada scriminal laws. Defending CanadaThere is no compulsory military service in Canada . However, serving in the regular Canadian Forces(navy, army,and air force) is a noble way to contribute to Canada and an excellent career choice ( ). You canserve in your local part-time navy, militia, or air reserves and gain valuable experience, skills, and people can learn discipline, responsibility, and skills by getting involved in the cadets ( ).

10 You may also serve in the Coast Guard or emergency services in your community such as a police force orfire department. By helping to protect your community, you follow in the footsteps of Canadians beforeyou who made sacrifices in the service of our Canada9 ABORIGINAL PEOPLESThe ancestors of Aboriginal peoples are believed tohave migrated from Asia many thousands of yearsago. They were well established here long beforeexplorers from Europe first came to North , vibrant First Nations cultures were rootedin religious beliefs about their relationship to theCreator, the natural environment, and each and treaty rights are in the CanadianConstitution. Territorial rights were firstguaranteed through the Royal Proclamation of1763 by King George III, and established the basisfor negotiating treaties with the newcomers treaties that were not always fully respected. From the 1800s until the 1980s, the federalgovernment placed many Aboriginal children inresidential schools to educate and assimilatethem into mainstream Canadian culture. 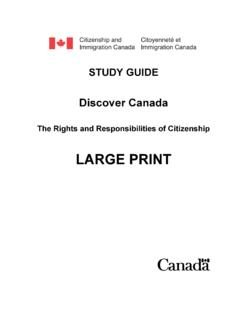 STUDY GUIDE Discover Canada The Rights and Responsibilities of Citizenship LARGE PRINT . 2 ! 3 ! The Oath of Citizenship I swear (or affirm) ... about this requirement can be found on page 64 of the study guide. All the citizenship test questions are based on the subject areas noted in the Citizenship Regulations, and all required ...