INTRODUCTION In this paper we will review the domestic standards for U .S. soybeans, soybean meal and soybean oil, delineate the appropriate responsible inspection entities, make recommendations as

3 The focus of this paper will be soybeans that are destined for crushing, , the production of oil and soybean meal. In order to make appropriate decisions on contractual Quality specifications, it is best that one understand the inspection system and normal marketing practices of the supplier. Deviation from normal marketing practices and the choice among standard Quality specifications can directly affect costs and risks. While the costs vary considerably with changing market conditions, the risks are more clearly defined. Hopefully, this paper will be helpful in evaluating and/or validating current contractual specifications for imports and Domestic production. SOYBEANS. The current Standards for Soybeans list six grade-limiting factors. They are test weight (bulk density), splits, total damaged soybeans, heat damaged, foreign material and soybeans of other colors.

4 In addition, moisture is determined on each lot and the results appear on all official inspection certificates, and oil and protein analysis will be performed upon request. Of these eight factors, five determine Quality and yield of end products and the other three are of little significance in determining Quality or in causing deterioration. Standards for Soybeans are shown in Table 1. Less Significant Standards Factors 1. Test Weight (Bulk Density). Of the enumerated Quality factors in Table 1, test weight is of the least significance in determining value or storability. Test weight is merely a measurement of the weight of a specific volume of soybeans. No published research has found a relationship of soybean bulk density to either oil or protein content. The only study showing a significant correlation was a study of 20. vessels received in Japan in 1975-76.

5 The correlations between test weight and percent oil and percent protein was and , respectively. These data show a rather strong inverse relationship for oil content, , the lower the test weight the higher the oil content. No significant correlation was found for protein content. It has been argued that low test weight soybeans require more space to store a given weight resulting in higher costs of storage. This is true. However, it is unlikely that there is a significant difference in cost of storing 56 pounds versus 55 pounds test weight soybeans. It is the writer's opinion that test weight offers no information on which to determine economic value. Its utility rests solely in estimating the amount of soybeans in a known volume where actual weight is unknown. This information has value in itself, but has no affect on the Quality or yield of oil or soybean meal from the soybeans being tested.

6 3. Table 1. United States Standards for Soybeans Minimum Maximum Level of Test Damaged Kernels Grade Weight Foreign soybean of Per bushel Splits Total Heat Material Other (pounds) Damaged Damaged Colors No. 1 56 10 1 1. No. 2 54 20 2 2. No. 3 52 30 3 5. No. 4 49 40 5 10. Sample Grade: Do not meet requirements for Nos. 1,2,3, or 4; or, contains: a) stones that have an aggregate weight in excess of %. b) presence of glass c) three or more crotalaria seeds (Crotalaria spp.). d) two or more castor beans (Ricinus communis L.). e) four or more particles of unknown foreign, harmful or toxic substances t) ten or more pieces of animal waste or filth g) musty, sour or commercially objectionable foreign odor h) heating or is otherwise of distinctly low Quality Source: Federal Grain Inspection Service, USDA. 2. Soybeans of other Colors The second factor of limited value to the soybean crusher is soybeans of other colors.

7 Commercial soybean varieties grown in the United States, when mature, have yellow or green seed coats and yellow cotyledons. Other than for factors related to immaturity, discoloration of the seed coat generally results from a viral or fungal infection. Bicoloration or "hilum bleeding" is caused by the soybean mosaic virus and purple seed stain or mottling is caused by a fungus (Cercospora kikuchii), both of which are confined to the seed coat and cause no deterioration of the seed or its constituents. Other types of discoloration caused by fungi are determined under damage interpretations and are considered damaged seed. 3. Splits The third factor of limited value, except in exceptional circumstances, is splits. The rather broad limitation of 20% in U .S. #2 soybeans attests to the limited value of this factor. However, the negative effect on oil Quality of splits increases directly with increased moisture content.

8 Splits in the presence of high moisture (greater than 13%) lead to activation of the lipoxygenase enzyme, which in turn catalyzes oxidation of the oil fraction. This results in a breakdown of triglycerides in to diglycerides and free fatty acids. This effect is measured by higher acid values and results in higher oil losses during refining. One could conclude then that the relative importance of splits increases with increased moisture, temperature and duration of storage. It is suggested that with proper purchasing specifications, adequate care in storage and first in - first-out inventory management, splits should not be a major concern. 4. Significant Standards Factors 1. Foreign Material We will discuss the three grade limiting factors considered significant not necessarily in order of their importance. Of these, foreign material is most often of concern since export shipments contain near the maximum allowed by contract.

9 Foreign material is defined as all material which readily passes through an 8/64 inch ( mm), round-hole, perforated sieve and any material other than soybeans remaining atop the sieve. The limitation in #2 soybeans is two percent. The presence of foreign material in soybeans adversely affects storability and drying/aeration efficiency, and, unless removed prior to processing, will affect the Quality of both the oil and the protein meal. Various foreign materials will segregate because of differences in particle size, shape, bulk density and adhesiveness. Because of dissimilarity in density, fine, more dense materials tend to accumulate near the impact point in the container being filled, forming a cone in the spout line. The coarser, lighter materials tend to migrate to the exterior of the storage container during loading. Therefore, the foreign material tends to concentrate during handling which can have a effect on storability which is related to its physical attributes The foreign material is generally more hygroscopic than the soybeans and may therefore be higher in moisture than the soybeans which can result on heating.

10 Even during aeration, forced air will tend to flow around the spout line making aeration less efficient and temperature less uniform. The non-uniform temperatures in the storage mass can generate convection currents resulting in moisture migration and accumulation with subsequent Quality deterioration. In addition, if the foreign material is processed with the soybeans it can cause the production of poorer Quality oil. In November 1987, the Federal Grain Inspection Service examined the oil content and oil Quality of twenty samples of foreign material found in commercial lots of soybeans. The results of this analysis are shown in Table 2. Table 2. Quantity and Quality of Oil Extracted from Foreign Material Fractions (as defined by FGIS). Type FM Oil Content ( % ) Acid Value Coarse (atop 8/64" sieve) Fine (thru 8/64" sieve) Source: Federal Grain Inspection Service, USDA. 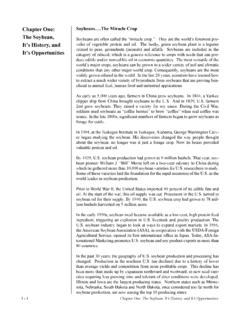 Chapter One: Soybeans….The Miracle Crop The … 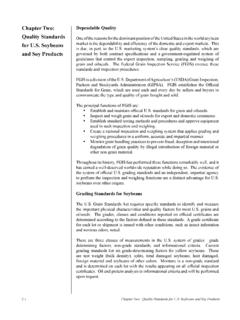 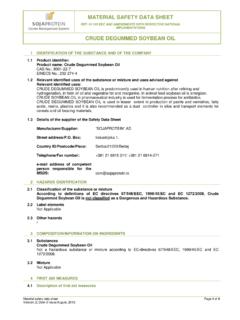 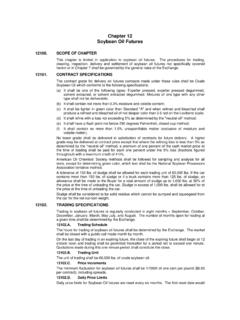 Chapter 12 Soybean Oil Futures 12100. SCOPE OF CHAPTER This chapter is limited in application to soybean oil futures. The procedures for trading, 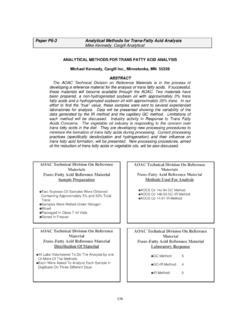