11-2 DOUBLE DRUM TRACTION WINCH SYSTEMS FOR OCEANOGRAPHIC RESEARCH The traction winch, as defined in marine deep water applications, is the primary component of a system designed to provide a significant tractive or

2 Although TRACTION winches have been around for many years, earlier SYSTEMS were designed for use with wire ropes in applications where high line pulls tended to knife or bury the outer layer of wire rope into previous layers of rope on the drum . The concept of using a TRACTION WINCH to extend the life of the cable other than by preventing knifing was usually not considered and in fact some earlier TRACTION WINCH SYSTEMS earned the reputation of cable eaters . Advancements in instrument packages and vehicles to perform more complex, intervention tasks at greater depths have placed greater demands on the cables and umbilicals linking them to the surface. Cable tensions in these applications will frequently approach 50% of the cable breaking strength and, as a result, larger minimum bend diameters must be maintained throughout the system while handling greater loads to obtain the best performance and extend the life of the cable.

3 The need for optimizing cable and umbilical performance and the introduction of new cable designs to meet these demands have resulted in an ever increasing challenge for handling SYSTEMS which allow optimum cable performance and maximize cable life. TRACTION WINCH system ADVANTAGES. Sheave diameter is determined by the cable's minimum bend diameter which increases as resulting loads approach 100% of the cable breaking strength. Large diameter TRACTION WINCH sheaves permit cable to be reeved in a single layer and to further avoid being subjected to unacceptable bend diameters. TRACTION WINCH system sheaves absorb high line pull loads by allowing the cable to work in a formed groove at the required minimum bend diameter. This single-layer effect is significant when compared with high line pull conditions in a conventional drum WINCH in which cable works on itself as a result of multiple layer wraps.

4 11-3. In this case, the cable will, at cross-over points, be subjected to a bend diameter equal to that of the actual cable diameter, resulting in possible damage to the cable. In addition, under extremely high tension, the cable may also pull down with a force great enough to penetrate existing cable layers on the WINCH drum . The effects of multiple grooving, single cable layering and applied torque from powered TRACTION sheaves are combined to absorb high line tension, translating to low tension as cable exits the inboard TRACTION sheave. The cable is then stored in multiple layers on a storage WINCH under low line tension in a range equal to approximately 10 to 15% of maximum operating load throughout the entire cable scope. Consistent, low storage tensions also improve accuracy and repeatability when levelwinding the cable.

5 As a comparison, storage tension on a conventional drum WINCH can vary between cable layers in response to varying dynamic tow loads. THEORY OF OPERATION. TRACTION winches are a friction drive device. By maintaining a sufficient arc of contact, an adequate coefficient of friction, and appropriate back tension on the inboard end of the cable or rope, controlled movement of the cable will be affected by powering the TRACTION sheaves. We can use the formula: T1=T2e to calculate the total developed line pull. = included angle formed by arc of cable contact with sheave (radians). = coefficient of friction e = T1 = high tension leg T2 = low tension leg 11-4. Note that if T2 , the low tension leg is brought to zero then T1 also goes to zero. Another important point regarding TRACTION WINCH design is in addition to the coefficient of friction, TRACTION depends on the arc of contact and not the diameter of the sheave.

6 If the arc of contact is two half wraps or 360. degrees, TRACTION would be the same with a 50 inch diameter sheave as with a 100 inch diameter sheave. It makes no difference that the length of rope in contact is twice as long with the larger sheave. Figure 1 shows the most common form of TRACTION device is the single drum capstan used extensively on ships for handling mooring lines. The drawback to handling long lines is the axial movement of the line across the face of the drum . This causes frictional wear and/or rotation of the line. These are best used when low line to drum friction coefficients are encountered and the line can slide axially across the drum face. Figure 1. The DOUBLE drum TRACTION WINCH with a companion storage WINCH is commonly used with long lengths of cable. In most cases, both drums are powered and have multiple grooves.

7 The cable is reeved from drum to drum 11-5. and groove to groove providing the axial movement without producing the axial friction inherent in a single drum capstan. Figure 2. Earlier DOUBLE drum TRACTION winches were designed to generate high line pull when using a conventional WINCH was not feasible. They did not always treat the cable very well. Many SYSTEMS were designed using a single drive powering both of the sheaves. The sheaves were simple offset one half of the cable diameter to help with the transition of the cable from groove to groove. This created several forms of abuse to the cable. Both of the sheaves are forced to turn at the same speed however due to machining tolerances and groove wear, different surface velocities on the two sheaves occur. This requires that the cable slip on one of the sheaves.

8 If the friction is high enough, the cable may not be able to slip and extremely high tension can occur within the wraps and armor wires can be broken. 11-6. The problem with simply offsetting the sheaves by one half a cable diameter is that while it may appear that a smooth transition is taking place in fact the cable is subjected to a sharp bend as is leaves the sheave and a rolling or twisting of the cable also occurs. Another form of abuse can occur between the TRACTION WINCH and storage WINCH . Using a storage WINCH and conventional guide roller levelwind sometimes subjected the cable to severe bending due to the close proximity of the storage WINCH and TRACTION WINCH . ADVANCES IN TRACTION WINCH system DESIGNS /. OPTIMUM USE AND CONSERVATION OF DECK SPACE. The modern TRACTION WINCH system is a multi-component system designed to extend cable life while optimizing available deck space.

10 This relative positioning eliminates twisting and/or chafing of the cable that might be associated with groove transfer. Figure 4 shows two views; the left 11-8. view is looking aft or overboard from the storage WINCH . The right view is the same set of sheave viewed slightly from the side. Figure 4. A properly designed TRACTION WINCH system also includes independently driven TRACTION sheaves. Independent sheave drives compensate for sheave machining variations and sheave groove wear by providing the same relative surface speed. Since today's umbilicals are becoming more sophisticated and expensive, the emphasis should be on protecting the umbilical. In the past, some designers used hardened groove material to minimize or eliminate groove wear. This not only lowered the coefficient of friction but also increased wear on the armor wires. 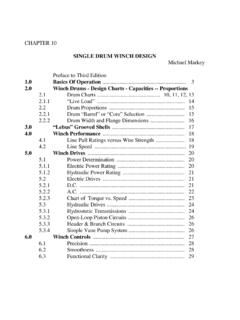 10-3 PREFACE Third Addition - Chapter 10 In the eleven years since the second edition appeared the single-drum of “load-drum” winch has seen notable evolution. 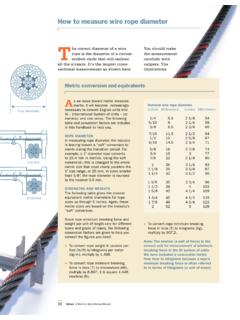 t he correct diameter of a wire rope is the diameter of a circum-scribed circle that will enclose all the strands. It’s the largest cross-sectional measurement as shown here. 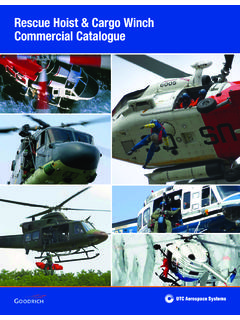 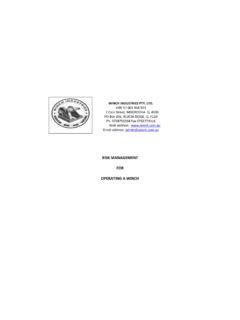 RISK MANAGEMENT FOR OPERATING A WINCH 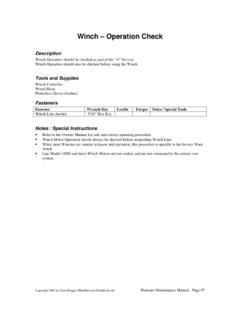