2 In both processes the activated carbon is moved from one tank to another in countercurrent with the ore pulp until the recovery of the loaded carbon in the first tank. This paper presents a DYNAMIC model that describes, with minor changes, the CARBON-IN- leach, the CARBON-IN- pulp , and the gold leaching processes . The model is numerically solved and calibrated with experimental data from a plant and used to perform a study of the effect of the activated carbon transfer strategy on the performance of the adsorption section of the plant. Based on the calculated values of the gold loss in the liquid and of the gold recovered in the loaded activated carbon that leaves the circuit, the results indicate that strategies in which a significant amount of activated carbon is held in the first tank and the contact time between the carbon and the pulp is longer are the best carbon transfer strategies for these processes .

3 Keywords: Activated carbon ; Adsorption; Gold; Leaching; Modeling; Optimization. INTRODUCTION in general very simplistic. The main goal of the present work is to provide an alternative improved Metal recovery or concentration by adsorption on model for the CIL process that can be applied to activated carbon has been the dominant process for process performance evaluation. gold extraction after leaching by cyanide in aerated The CIP and CIL processes use granulated alkaline slurries. The continuous processes of gold activated carbon that is mixed with the pulp , recovery by adsorption on activated carbon in composed of ore and water, and after it has been agitated tanks, namely the CARBON-IN- pulp (CIP) and loaded with aurocyanide ion, the rich activated the CARBON-IN- leach (CIL) processes , have been carbon is pumped out into the adsorption circuit and widely used since the 1970s.

4 Due to the economic sent to the elution process. The main difference importance of these processes , their SIMULATION has between the CIL and CIP processes is that in the been receiving some attention for twenty years, latter leaching and adsorption occur simultaneously, especially in South Africa, Australia, and Canada. while in the former dissolution of the gold has These studies have provided useful insights for already finished when adsorption starts. The CIL. process operation and optimization; however, some process is mainly used to treat ores containing assumptions of these models, such as the reactor organic matter and preg-robbing species, while the mass balances and the activated carbon transfer, are CIP is used in general cases (McDougall and *To whom correspondence should be addressed 624 L. R. P. de Andrade Lima Hancock, 1980; Habashi, 1987; Bailey, 1987; al.)

5 , 2001). The more detailed models available take Yannopoulos, 1991; Marsden and House, 1992). into account competitive adsorption; carbon fouling The CIL and CIP are slow processes , and in order by organic compounds and fine particles; carbon to improve gold extraction and recovery, they occur loading distribution; carbon loss by attrition;. continuously in a cascade of large agitated tanks. leaching and preg-rubbing ; and macro and Figure 1 schematically shows the CIL or CIP circuit micropore diffusion kinetic control, but most of them with three reactors. Note that the pulp flows by assume perfect mixing in the reactors with no gravity from one tank to the next by overflow, the segregation, instantaneous carbon transfer, and fresh activated carbon is added in the last tanks and constant solid and liquid holdup. the carbon moves intermittently in countercurrent The main objective of this paper is to present an with the pulp towards the elution process.

6 Due to the alternative general DYNAMIC model that can be used fact that it is much larger than the ore particles, it can to describe the CARBON-IN- leach process, but can also be easily separated by screening; therefore, note also be easily simplified to describe the CARBON-IN- pulp in Fig. 1 that there are interstage screens (IS) at the and the gold leaching processes . This work is reactor exit that confine the carbon in the tanks until significant because the reactor description suggested the transfer pulp is activated. Reactors analogous to here is more realistic than that used in most of the the conventional CIP and CIL tanks can also be used available models due to the fact that the evolution of for gold leaching without adsorption. solid, liquid, and activated carbon holdup are taken The DYNAMIC SIMULATION of the CIP and CIL into account in the formulation, and the carbon processes has received some attention since the transfer from one reactor to another is assumed to be 1980s, and some useful models are currently a transient process in contrast with the commonly available to perform specific process optimization used assumption of instantaneous transfer.

8 Activate d carbon fl ow To elution S New activated carbon pulp from the leaching circuit P. IS. To tillings disposal Activated carbon Ore pulp flo w Figure 1: Schematic diagram of a CARBON-IN- pulp or CARBON-IN- leach plant with three tanks, showing the interstate screens (IS), the screen at the exit of the first tank (S), and the carbon transfer pumps (P). Brazilian Journal of Chemical Engineering DYNAMIC SIMULATION of the CARBON-IN- pulp and CARBON-IN- Leach processes 625. GOVERNING EQUATIONS 1986; van der Walt and van Deventer, 1992;. Woollacott et al., 1990; Stange, 1991, 1999;. The detailed mathematical description of the Schubert et al., 1993). simultaneous gold leaching and adsorption on The adsorption kinetic used in the present study is activated carbon that occurs in the CARBON-IN- leach described by the lumped equation given by the linear process is somewhat intrinsically complex such as adsorption-desorption equation, which assumes that the heterogeneous nature of the system that includes adsorption is a reversible process (Dixon et al.

9 , 1978;. ore, activated carbon , aqueous solution, and gas; also Carrier et al., 1987; Woollacott et al., 1990; Stange, there are several physical and chemical phenomena 1991,1999; Schubert et al., 1993): that happen simultaneously. In this section a model that includes leaching and adsorption on the carbon kinetics and the reactor is presented. In the next ( ). RCB=k c Cl Cc* -Cc -k d Cc (1). section the calibration and the use of this model is discussed. where Cl is the gold concentration in the liquid In this study, for the sake of conciseness, the phase, Cc is gold content in the activated carbon , Cc*. kinetics of only two simple models for gold leaching, is the maximum gold content of the activated carbon , cyanide consumption, and adsorption on activated and kc and kd are empirical kinetic constants of carbon are presented; however, they can easily adsorption and desorption for gold.

10 Note that under include other kinetic equations. These models are equilibrium conditions (RCB=0) this model becomes calibrated with data from a plant and the resulting the classical Langmuir equation, where A = Cc* and equations are used to evaluate the carbon transfer B = kd/ka. strategy that will be discussed in the next section. b) Gold Cyanidation Kinetic Models The kinetics of three-phase reactions can be very a) Adsorption on Activated carbon complex; however, in many ore leaching systems the pseudohomogeneous approach has been sufficient to The detailed kinetic models for gold adsorption describe well the main features of the process (Rees that include diffusion in the activated carbon and van Deventer, 2001; Rees et al., 2001; de particles or in the external film require the use of Andrade Lima, 2001; de Andrade Lima et al., 2002. 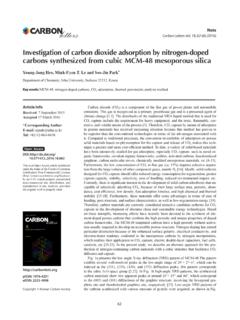 Investigation of carbon dioxide adsorption by … 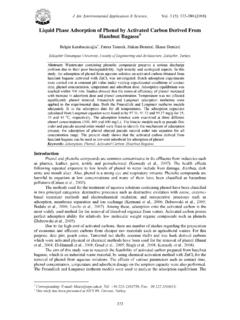 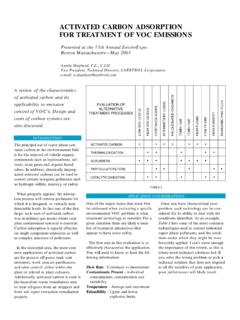 A C T I V ATED CARBON ADSORPTION FOR …

In the adsorption process, molecules of a contaminated gas are attracted to and accumulate on the surface of the activated carbon. Carbon is a common- 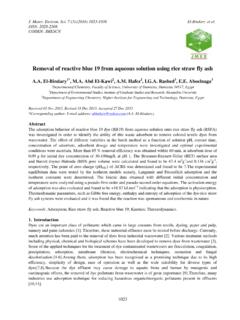 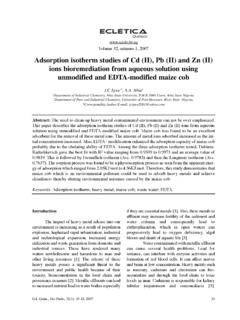 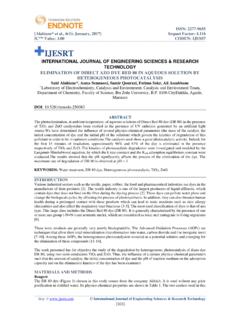 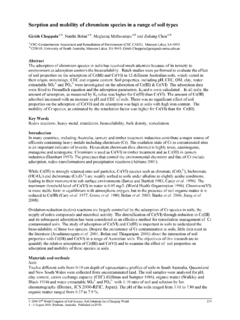 Sorption and mobility of chromium species in a …