2 11. Pre-literacy skills .. 12. Summary .. 14. Chapter 3: Models of identification .. 15. Estimating the level of need .. 15. Stability of Language 17. Level of need in children living with social disadvantage .. 19. Estimating the current level of need in England .. 20. Methods for identifying children in need of additional support .. 25. A continuum of response to a continuum of need .. 25. Early Language development : Needs, provision and intervention for preschool children from socio-economically disadvantage backgrounds Law, Charlton, Dockrell, Gascoigne, McKean and Theakston Chapter 4: Effective approaches and interventions .. 28. Introduction .. 298. 29. Different models of service delivery .. 298. How robust is the evidence?.. 41 Page | iii The evidence template .. 411. Papers identified for full data extraction .. 42. Findings .. 43. Focus of the interventions .. 44. Programmes and practices .. 44. Who delivers the intervention? .. 45. Location of the 45. Intensity and duration.

5 In addition, it has the specific objectives of highlighting interventions that have the greatest potential to improve children's life Page | vi chances, reduce inequalities in outcomes, and potentially inform further rounds of research funded by the EEF. The review starts with an overview of the most recent findings associated with our understanding of Early Language and preliteracy development . It goes on to look at prevalence and at the proportion of children not attaining the appropriate levels of attainment in the Early years. It then turns to interventions, their efficacy and effectiveness, and contextual factors that affect their implementation. Finally, we move on to the way that services are delivered on the ground in England and highlight the profile of five local authorities, the services they deliver, and factors affecting that delivery. The review ends with a summary of the main findings and recommendations for which interventions could usefully be taken forward.

6 In the Appendices we provide summaries of the interventions identified and a table of interventions and their outcomes and then provide some additional details about the five case studies identified in Chapter 5. Early Language development Early Language development generally progresses through a series of distinct but overlapping stages and the majority of children follow similar patterns in a given Language , albeit at different rates. Although Language acquisition is a very robust process there is evidence that the rate at which children develop Language is sensitive to the amount of input they receive from the adults around them. The quality of input that children receive is likely to be more important than the quantity. Children's gestures, such as pointing, are important precursors of subsequent Language development . There are a number of well-developed measures of Early Language development . Some directly test receptive and expressive Language skills, other rely on parental report.

7 Although children often have different patterns of interaction as they start to speak (some use lots of words, others combine words very Early on in their development ), broadly speaking children need to be using between 50 and 100 words before they start putting words together into word combinations or proto-sentences. At some point between two and three years of age, children typically start to produce longer, more complex sentences, and begin to include function words (for example pronouns like I/you/he, auxiliary verbs like can/will/might, articles like a/the) and word endings/ morphology (such as dogs, finished). Putting words together may be a better predictor of later abilities than the number of words that a child uses. Identification The most recent prevalence figures for preschool Language difficulties summarised in this review fall between 7% and 14% depending on the age, thresholds adopted, and the measures used. These figures are highly sensitive to social disadvantage.

8 In lower socio-economic groups (however defined). the figures are much higher. Studies have demonstrated that there is a great deal of individual variability in Language as it develops, some children starting well and dropping behind, others starting very slowly and catching up. This finding has been replicated in a number of studies, each finding similar rates in the preschool years of approximately 70% of children with low Language abilities having resolving difficulties and 30%. persisting difficulties. A small, late-emerging group also exists who appear to start well but then fall behind their peers later in development . Early Language development : Needs, provision and intervention for preschool children from socio-economically disadvantage backgrounds Law, Charlton, Dockrell, Gascoigne, McKean and Theakston We also look at the proportion of children not meeting expectations for the communication, Language , and literacy skills (CLL) on the Early Years Foundation Stage measure.

10 Parent child interaction interventions with young children as a means of promoting children's Language abilities and ensuring that children are ready for learning when they get to nursery at 2 3 years; and 2. training Early years practitioners (professional development ) to deliver interventions within Early years settings. Service development Rather than writing about every local authority in England, we identified five case sites characterised as two inner city areas and three rural or suburban areas. We then collected data about each site and its provision for children with SLCN irrespective of from where those services were provided (health, education or private sectors). The five sites represent SLCN provision that is at various stages of development , but all five are adopting a systematic approach to delivering integrated provision to achieve shared outcomes. The approach draws on the expertise of the specialist workforce from both health and education, together with systematic support and development for the wider children's workforce as well as meaningful engagement with families and young people.

Secondary school teachers should ask not what they can do for literacy, but what literacy can do for them. This guidance report offers seven practical evidence-based recommendations, relevant to all students, based on the key concept of disciplinary literacy. It aims to support teachers in all subjects with strategies to 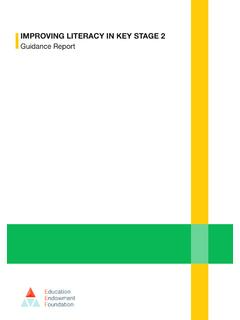 and rewarding lives. Yet despite our best efforts, a disadvantaged child in England is still more than twice as likely as their classmates from more advantaged homes to leave primary school without reaching the expected levels in reading and writing. At the Education Endowment Foundation, we believe

IMPROVING SOCIAL AND EMOTIONAL LEARNING IN …

3 Executive summary Closing the attainment gap: 15 key lessons learned in the EEF’s first 6 years More than £96 million has been invested by the EEF and 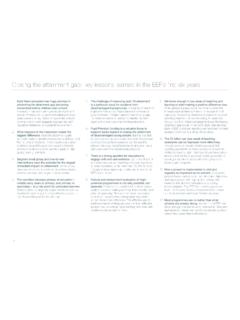 Closing the attainment gap: key lessons learned in the EEF ...

Closing the attainment gap: key lessons learned in the EEF’s first six years. 17 13. Catch up is difficult: we should aim to get it right first time round for all children. The EEF evaluated over 20 catch-up programmes that aimed to support struggling readers at the transition from primary to 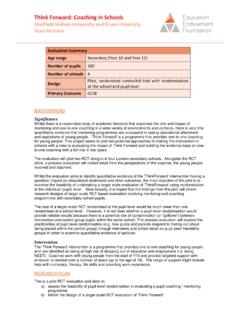 schools with a view to evaluating the impact of Think Forward and building the evidence base on one- to-one coaching with a full trial in two years. The evaluation will pilot two RCT designs in four London secondary schools.

maths, but it is just as pervasive. Our research has shown that disadvantaged pupils start to fall behind in science in Key Stage 1; the gap only gets wider throughout primary and secondary school and on to A-level. Helping schools to use evidence and to understand better the most effective ways to improve results is the best way to tackle this

THE EEF GUIDE TO THE PUPIL PREMIUM

alternative approaches • 4Consider the likely cost-effectiveness of a range of approaches Quality teaching helps every child Good teaching is the most important lever schools have to improve outcomes for disadvantaged pupils. Using the Pupil Premium to improve teaching quality benefits all students and has a particularly 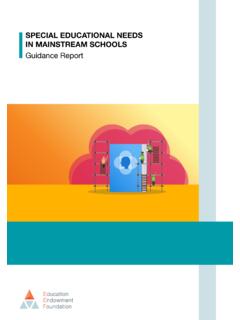 special educational needs support. EHC plans identify educational, health and social needs and set out the additional support to meet those needs.’ 6 Across all schools, the number of pupils with SEND has risen for the third consecutive year. Pupils with SEND are more likely to be eligible for free school meals (28% compared to 13% of pupils ...

supporting early language and reading for every child 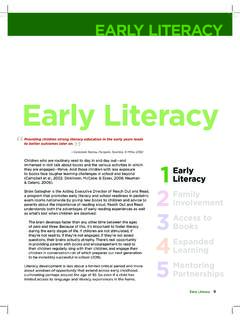 Literacy development is less about a limited critical period and more about windows of opportunity that extend across early childhood, culminating perhaps around the age of 10. So even if a child has limited access to language and literacy experiences in the home, “ ” Early Literacy Early Literacy 9

Literacy development is less about a limited critical period and more about windows of opportunity that extend across early childhood, culminating perhaps around the age of 10. So even if a child has limited access to language and literacy experiences in the home, “ ” Early Literacy Early Literacy 9

The first phase of early literacy learning, or pre-literacy development, lasts from birth to approximately 12 to 15 months of \ൡge. It includes the communication and social skills acquired before language onset that form the foundation for language acquis對ition …

between the development of children of similar ages (DfES, 2007a). Practitioners plan to enable children to achieve the statutory early learning goals (ELGs) in six areas of learning by the end of the reception year: • Personal, social and emotional development • Communication, language and literacy • Problem solving, reasoning and numeracy

Literacy development lies at the heart of the Grade 1–8 language curriculum. Literacy learning is a communal project and the teaching of literacy skills is embedded across the curriculum; however, it is the language curriculum that is dedicated to instruction in the 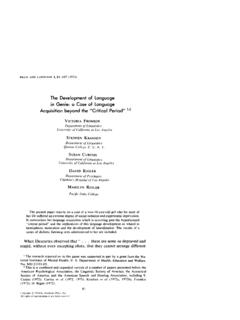