2 Dynamic panel data estimators Nickell bias Nickell bias A serious difficulty arises with the one-way fixed effects model in the context of a dynamic panel data (DPD) model particularly in the small T , large N" context. As Nickell (Econometrica, 1981) shows, this arises because the demeaning process which subtracts the individual's mean value of y and each X from the respective variable creates a correlation between regressor and error. The mean of the lagged dependent variable contains observations 0. through (T 1) on y , and the mean error which is being conceptually subtracted from each it contains contemporaneous values of for t = 1 .. T . The resulting correlation creates a bias in the estimate of the coefficient of the lagged dependent variable which is not mitigated by increasing N, the number of individual units. Christopher F Baum (BC / DIW) Dynamic Panel Data estimators boston college , Spring 2013 3 / 50.

3 Dynamic panel data estimators Nickell bias The demeaning operation creates a regressor which cannot be distributed independently of the error term. Nickell demonstrates that the inconsistency of as N is of order 1/T , which may be quite sizable in a small T " context. If > 0, the bias is invariably negative, so that the persistence of y will be underestimated. ) as N will be For reasonably large values of T , the limit of ( . approximately (1 + )/(T 1): a sizable value, even if T = 10. With = , the bias will be , or about 1/3 of the true value. The inclusion of additional regressors does not remove this bias. Indeed, if the regressors are correlated with the lagged dependent variable to some degree, their coefficients may be seriously biased as well. Christopher F Baum (BC / DIW) Dynamic Panel Data estimators boston college , Spring 2013 4 / 50. Dynamic panel data estimators Nickell bias Note also that this bias is not caused by an autocorrelated error process.

4 The bias arises even if the error process is If the error process is autocorrelated, the problem is even more severe given the difficulty of deriving a consistent estimate of the AR parameters in that context. The same problem affects the one-way random effects model. The ui error component enters every value of yit by assumption, so that the lagged dependent variable cannot be independent of the composite error process. Christopher F Baum (BC / DIW) Dynamic Panel Data estimators boston college , Spring 2013 5 / 50. Dynamic panel data estimators Nickell bias One solution to this problem involves taking first differences of the original model. Consider a model containing a lagged dependent variable and a single regressor X : yit = 1 + yi,t 1 + Xit 2 + ui + it (1). The first difference transformation removes both the constant term and the individual effect: yit = yi,t 1 + Xit 2 + it (2).

5 There is still correlation between the differenced lagged dependent variable and the disturbance process (which is now a first-order moving average process, or MA(1)): the former contains yi,t 1 and the latter contains i,t 1 . Christopher F Baum (BC / DIW) Dynamic Panel Data estimators boston college , Spring 2013 6 / 50. Dynamic panel data estimators Nickell bias But with the individual fixed effects swept out, a straightforward instrumental variables estimator is available. We may construct instruments for the lagged dependent variable from the second and third lags of y , either in the form of differences or lagged levels. If is , those lags of y will be highly correlated with the lagged dependent variable (and its difference) but uncorrelated with the composite error process. Even if we had reason to believe that might be following an AR(1). process, we could still follow this strategy, backing off one period and using the third and fourth lags of y (presuming that the timeseries for each unit is long enough to do so).

7 A key aspect of the AB strategy, echoing that of AH, is the assumption that the necessary instruments are internal': that is, based on lagged values of the instrumented variable(s). The estimators allow the inclusion of external instruments as well. Consider the equations yit = Xit 1 + Wit 2 + vit vit = ui + it (3). where Xit includes strictly exogenous regressors, Wit are predetermined regressors (which may include lags of y ) and endogenous regressors, all of which may be correlated with ui , the unobserved individual effect. First-differencing the equation removes the ui and its associated omitted-variable bias. Christopher F Baum (BC / DIW) Dynamic Panel Data estimators boston college , Spring 2013 9 / 50. Dynamic panel data estimators Arellano Bond estimator The AB approach, and its extension to the System GMM' context, is an estimator designed for situations with: small T , large N' panels: few time periods and many individual units a linear functional relationship one left-hand variable that is dynamic, depending on its own past realisations right-hand variables that are not strictly exogenous: correlated with past and possibly current realisations of the error fixed individual effects, implying unobserved heterogeneity heteroskedasticity and autocorrelation within individual units'.

8 Errors, but not across them Christopher F Baum (BC / DIW) Dynamic Panel Data estimators boston college , Spring 2013 10 / 50. Dynamic panel data estimators Arellano Bond estimator The Arellano Bond estimator sets up a generalized method of moments (GMM) problem in which the model is specified as a system of equations, one per time period, where the instruments applicable to each equation differ (for instance, in later time periods, additional lagged values of the instruments are available). This estimator is available in Stata as xtabond. A more general version, allowing for autocorrelated errors, is available as xtdpd. An excellent alternative to Stata's built-in commands is David Roodman's xtabond2, available from SSC (findit xtabond2). It is very well documented in his paper, included in your materials. The xtabond2. routine provides several additional features such as the orthogonal deviations transformation discussed below not available in official Stata's commands.

10 Yi,1 .. yi,2 y Zi = i,1.. yi,T 2 yi,T 3. so that the first observation available for the regression is that dated t = 4. Christopher F Baum (BC / DIW) Dynamic Panel Data estimators boston college , Spring 2013 13 / 50. Dynamic panel data estimators Constructing the instrument matrix To avoid this loss of degrees of freedom, Holtz-Eakin et al. construct a set of instruments from the second lag of y , one instrument pertaining to each time period: . 0 0 .. 0. yi,1 0 .. 0 .. Zi = 0 yi,2 .. 0 .. 0 0 .. yi,T 2. The inclusion of zeros in place of missing values prevents the loss of additional degrees of freedom, in that all observations dated t = 2 and later can now be included in the regression. Although the inclusion of zeros might seem arbitrary, the columns of the resulting instrument matrix will be orthogonal to the transformed errors. The resulting moment conditions correspond to an expectation we believe should hold: E(yi,t 2 it ) = 0, where refers to the FD-transformed errors. 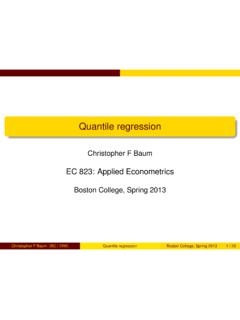 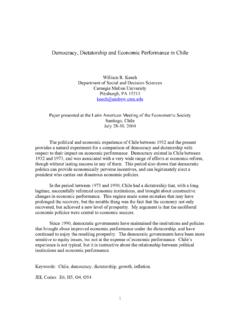 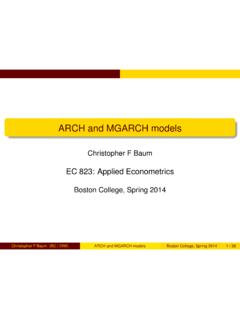 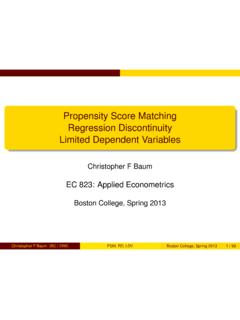 Propensity score matching The key concern is that of similarity. How can we ﬁnd individuals who are similar on all observable characteristics in order to match treated 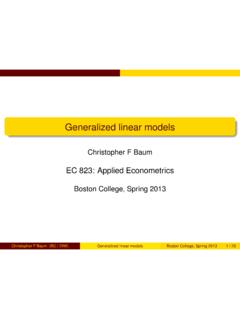 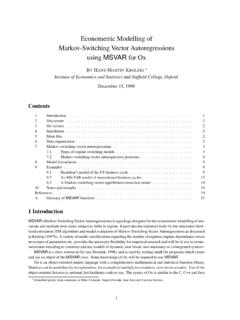 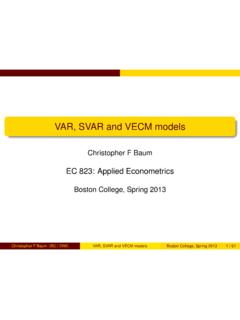 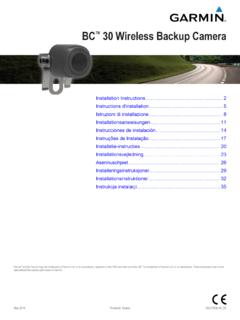 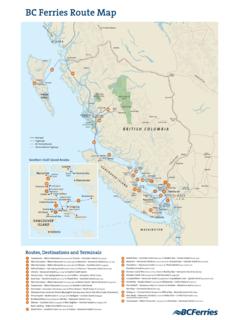 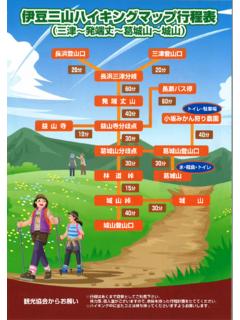 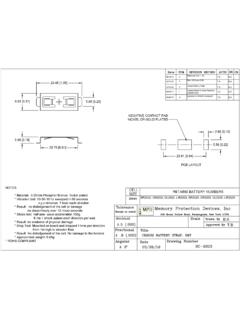 BC-2003 Datasheet and Technical Drawing | MPD