Effect of superheated steam cooking on fat and …

Asmaa et al.IFR 22(2): 8-60 600 a suitable chromatographic response. Fatty acids were identified by comparing the retention times of FAME mixture with the …

2 It has been found that the fat content of raw sample was higher than that Accepted: 16 August 2014. of all cooked samples. The total fat content of cooked sample, showed a linear decreasing with time at all investigated temperatures. superheated steam produce changes in saturated fatty acid (SFA), monounsaturated fatty acid (MUFA), and polyunsaturated fatty acid (PUFA). Keywords in which their values were found to decrease in cooked samples. When different cooking Fat conditions (temperature, time) were applied, the fatty acids were decreased as the time and Fatty acid temperature increased. The PUFA and MUFA were less prone to decrease at 150 C, while at superheated steam this temperature there was a remarkable loss in SFA content. This cooking method considerably cooking reduced the level of fat and SFA which have a positive Effect on health.

3 In addition it could Chicken sausage imply a great choice for consumers to choose the healthier technique for cooking food. All Rights Reserved Introduction polyunsaturated fatty acid (PUFA) compared to pork and beef sausage. This is because it has a great During the past twenty five years, the partnership nutritional value and high level of PUFA compared between diet and health has been extensively studied to red meat, which has a remarkable Effect on health and increasing numbers of consumers have been (Khaksar et al., 2010; Issara et al., 2014). In addition encouraged to enhance their eating habits (Ju rez Poultry products are universally popular, because they et al., 2009). Most current dietary guidelines are not subject to cultural or religious constraints and recommended that the daily consumption of total the meat itself is perceived as wholesome, healthy fat for individuals with normal blood levels of and nutritious, being relatively low in fat n fat and cholesterol should be no more than 30% from the with more desirable unsaturated fatty acid content total calorie consumption that of saturated fat should (Naveena et al.)

4 , 2012). be no in excess of 10% of the total calorie intake and Fat and fatty acid composition of meat are cholesterol intake below 300 mg/day (Nishida et al., concerned among consumers due to their importance 2004; Leosdottir et al., 2005). for nutritional value and health (Wood et al., 2004;. Meat and meat products are considered a vital Idrus et al., 2013). The SFA and trans fat have already source of vitamins and trace ingredient, which been identified by the international dietary authorities considerably contributes to the daily intakes of as major targets for diet reduction (WHO, 2003). numerous nutrients that are essential for optimal Remarkable reductions in these particular nutrients, development and growth (Gerber et al., 2009). as well as an enhance within the PUFA content, However, the consumption of some meat ingredients especially n-3 PUFA at the expense of n-6 PUFA, ( fat, saturated fatty acid (SFA), cholesterol, and could have a noticeable Effect on public health sodium) has been related with a higher risk of major improvement (HMSO, 1994).

5 In fact, a valuable chronic diseases ( ischemic heart disease, cancer, amount of PUFA can be provided by Ruminant meat hypertension and excessive weight) (L pez-L pez et specifically n-3 fatty acid in the human diet (Alina al., 2011; Mazaheri Tehrani, 2012). Chicken sausages et al., 2012). On the other hand, it is renown that the considered as are very popular and highly consumed low PUFA/SFA and high n-6/ n-3 ratios of some in many countries found to be a good source of meats contribute to the imbalance in the fatty acid *Corresponding author. Email: Tel: 604-6532224; Fax: 604-6573673. 599 Asmaa et 22(2): 598-605. intake of today's consumers (Wood et al., 2004). the Effect of superheated steam on fat and fatty acid Chicken sausage has to be cooked before composition. The aim of the present work, therefore, being consumed to a chief palatable, digestible and was to determine the Effect of superheated steam safe product.

7 , transported directly to the laboratory. The chicken 2012). However, superheated steam may offer an sausage was held under frozen conditions (-18 to alternative cooking method. superheated steam is -20 C) in a freezer until the cooking process. Then generated from the addition of sensible heat to water, it taken out from the freezer and thawed for 8 hours this lead to increase its temperature over boiling in a chillier at 5 C prior to the cooking process. Each point or saturation temperature at the given pressure individually chicken sausage weighs approximately (Zzaman et al., 2013a). In contrast to saturated 11g and was cooked using the SHARP superheated steam , a drop in temperature will not happen in steam oven ( AX-1500 ) with temperatures : 150oC. condensation of the steam as long as the temperature for (4,5,6) min, 200oC for (3,4,5) min and 250oC for is still higher than the saturation temperature at (2,3,4) min.

8 The processing pressure (Cenkowski et al. 2007;. Zzaman et al., 2013b). Various products have been Determination of moisture content, total fat and processed with superheated steam such as spent cooking loss grains (Tang et al., 2005), potato chips (Kingcam The moisture content was determined in et al., 2008), Asian noodles (Pronyka et al., 2008). accordance with the standard method of AOAC. Sweet potato (Hatamipour et al., 2007), chicken (2000). Moisture was quantified by weighing 10 g of meat (Nathakaranakule et al., 2007), pork slices (Sa- sample in aluminium dish and kept in an oven drying adchom et al., 2011) and oat goat (Head et al., 2011). at 105oC for overnight. cooking loss was determined It was stated that the utilization of superheated steam by the difference in weight before and after cooking , doesn't cause drying only but it creates other changes and it expressed as percentage of the original weight in product such as protein denaturation, starch as shown in Eq.

9 1: gelatinization, enzyme destruction, changes in color and texture, and deodorization. These characteristics (1). could possibly be employed in both heating and drying food (Head et al., 2010; Head et al., 2011). The fat content of the sample was determined Somjai et al. (2009) found that superheated steam using soxhlet extraction with petroleum ether as a could produce better quality of products, such as good solvent (AOAC, 2000 ). colour, high porosity and high retention of vitamin C. In addition, superheated steam offered advantages Fatty acid analysis such as, an oxygen free environment which lower the Fatty acid methyl ester (FAME) was prepared percentage of oxidation and nutrient loss, improve according to the method of Mondello et al. (2006). thermal degradation due to the increase in heat A twenty L of crude oil was extracted from chicken transfer, improve energy efficiency and accelerated sausage samples and trans-esterified in a Pyrex tube drying rate (Cenkowski et al.)

10 , 2007; Somjai et al., by using 200 L of borontrifluoride-methanol (20%. 2009). BF3) reagent then heated for 30 min at100 C. After The Effect of various cooking methods on cooling, 200 L of n-hexane and 800 L of distilled fat and fatty acid in meat products have been water were added to the mixture, which was then widely investigated in the literatures (Baggio and agitated manually for 1 min and centrifuged for 2. Bragagnolo, 2006; Alfaia et al., 2010; Dana Larsen, min. Approximately 100 L of the upper n-hexane 2010; lina et al., 2012).To the best of our knowledge, layer was transferred to a 150 L glass insert for 2. little information was available in the literatures on ml vials after diluting the extracted hexane to obtain Asmaa et 22(2): 598-605 600. a suitable chromatographic response. Fatty acids Table 1. Moisture, cooking loss and fat content of raw were identified by comparing the retention times and cooked chicken sausage of FAME mixture with the standard Myristic acid palmitic acid, stearic acid, oleic acid, linoleic acid, eicosapentaenoic acid (EPA), docosahexaenoic acid (DHA). Application of ISO 22000 in comparison with …

Afoakwa et al./IFRJ 20(4):1771-1781 1773 inside the food chain organization. iii. Improves the effectiveness of internal and external communication between suppliers, clients, 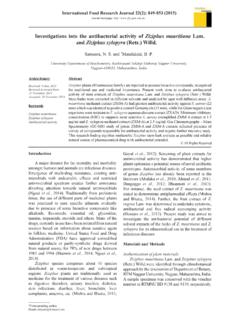 Investigations into the antibacterial activity of …

850 Sameera, N. S. and Mandakini, B.P.IRJ 22(2): 849-83 Preparation of extract Bioactive compounds from the bark of above referred species were processed using different ... 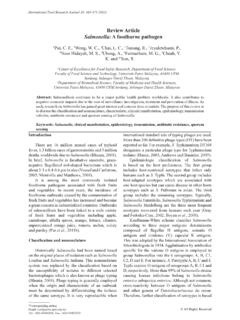 1574 Siripongvutikron et al./IFRJ 19(4):1573-1580 paste and its application on white shrimp and to monitor the shelf life of the marinated shrimp packed under modified atmospheric condition during chilled Standardization of process condition in batch …

Kathiravan et al./IFRJ 21(4): 1305-1312 1307 of Ellab Val suit Pro software for thermal pasteurized juices. Methods of analysis Parameters of the samples were analysed as 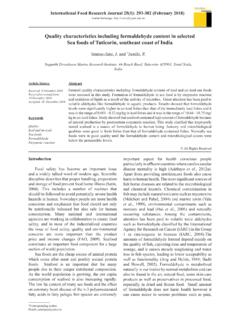 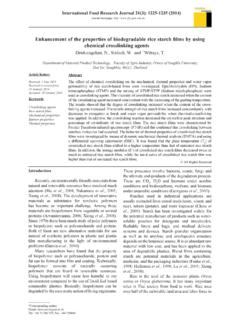 Enhancement of the properties of biodegradable … 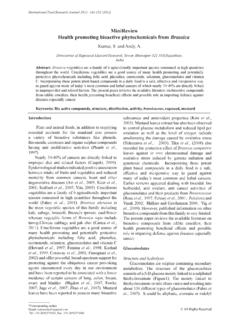 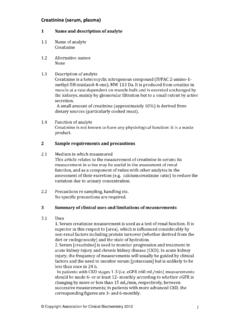 © Copyright Association for Clinical Biochemistry 2012 2 3. Serum [creatinine] can be combined with measurements of urine creatinine in timed urine specimens to generate the creatinine clearance, 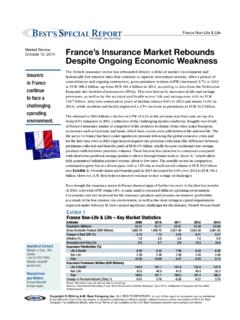