2 INTENDED USE (Group M and Group O) and HIV-2 in human serum and plasma using CMIA. The ARCHITECT HIV Ag/Ab Combo assay is a chemiluminescent technology with flexible assay protocols, referred to as Chemiflex. microparticle immunoassay (CMIA) for the simultaneous qualitative detection of HIV p24 antigen and antibodies to human immunodeficiency In the first step, sample, assay diluent, and paramagnetic microparticles virus type 1 and/or type 2 (HIV-1/HIV-2) in human serum or plasma. The are combined. HIV p24 antigen and HIV-1/HIV-2 antibodies present in the ARCHITECT HIV Ag/Ab Combo assay is intended to be used as an aid in sample bind to the HIV-1/HIV-2 antigen and HIV p24 monoclonal (mouse). the diagnosis of HIV-1/HIV-2 infection and as a screening test for donated antibody coated microparticles. After washing, the HIV p24 antigen blood and plasma. An ARCHITECT HIV Ag/Ab Combo result does not and HIV-1/HIV-2 antibodies bind to the acridinium-labeled conjugates distinguish between the detection of HIV p24 antigen, HIV-1 antibody, or (HIV-1/HIV-2 antigens [recombinant], synthetic peptides, and HIV p24.)

3 HIV-2 antibody. antibody [mouse, monoclonal]). Following another wash cycle, pre-trigger and trigger solutions are added to the reaction mixture. The resulting SUMMARY AND EXPLANATION OF TEST chemiluminescent reaction is measured as relative light units (RLUs). Acquired immunodeficiency syndrome (AIDS) is caused by two types of A direct relationship exists between the amount of HIV antigen and human immunodeficiency viruses, collectively designated antibodies in the sample and the RLUs detected by the ARCHITECT. HIV is the etiologic agent of ,3,6,7 HIV is transmitted by sexual i System optics. The presence or absence of HIV p24 antigen or contact, exposure to blood or blood products, and prenatal infection of HIV-1/HIV-2 antibodies in the specimen is determined by comparing the a fetus or perinatal infection of a Antibodies against HIV are chemiluminescent signal in the reaction to the cutoff signal determined nearly always detected in AIDS patients and HIV infected asymptomatic from an ARCHITECT HIV Ag/Ab Combo calibration.

4 Specimens with signal individuals,8,9 and HIV infection is always detected in AIDS patients and to cutoff (S/CO) values greater than or equal to are considered seropositive individuals by culture or amplification of viral RNA and/or reactive for HIV p24 antigen or HIV-1/HIV-2 antibodies. Specimens with proviral ,10 S/CO values less than are considered nonreactive for HIV p24 antigen Phylogenetic analysis classifies HIV-1 into groups M (major), N (non-M, or HIV-1/HIV-2 antibodies. non-O), and O (outlier).4,5 Group M viruses have spread throughout the Specimens that are initially reactive in the ARCHITECT HIV Ag/Ab Combo world to cause the global AIDS pandemic. In contrast, groups N and O are assay should be retested in duplicate. Repeat reactivity is highly predictive relatively rare and endemic to west central However, group O of the presence of HIV p24 antigen and HIV-1/HIV-2 antibodies. However, infections have been identified in Europe and the HIV-1 group M as with all immunoassays, the ARCHITECT HIV Ag/Ab Combo assay may is composed of genetic subtypes (A, B, C, D, F, G, H, J, and K) and yield nonspecific reactions due to other causes, particularly when testing circulating recombinant forms (CRFs).

5 5,23 The geographic distribution and in low prevalence populations. A repeatedly reactive specimen should be regional predominance of HIV-1 subtypes and CRFs vary. All subtypes and investigated further with sensitive, supplemental HIV-specific tests, such many recombinant strains exist in Africa with CRF02_AG the predominant as immunoblots, antigen tests, and HIV nucleic acid tests. Supplemental strain in west and west central Africa, subtypes A, C, and D predominant testing of repeat-reactive specimens obtained from individuals at risk in east central Africa, and subtype C predominant in southern for HIV infection usually confirms the presence of HIV antibodies or HIV. HIV-1 subtype B is the predominant subtype in the USA, Europe, Japan, antigen, and HIV nucleic acid. A full differential diagnostic work-up for the and Australia. However, a significant percentage of new HIV-1 infections diagnosis of AIDS and AIDS-related conditions includes an examination of in Europe are caused by non-B ,30 In Asia, subtype C is found the patient's immune status and a clinical history.

6 In India, and CRF01_AE (formerly called subtype E) and subtype B are For additional information on system and assay technology, refer to the in Thailand and southeast South America predominantly has ARCHITECT System Operations Manual, Section 3. subtypes B and ,33. REAGENTS. Human immunodeficiency virus type 2 (HIV-2) is similar to HIV-1 in Reagent Kit, 100 Tests, 4 x 100 Tests, 4 x 500 Tests its structural morphology, genomic organization, cell tropism, in vitro NOTE: Some kit sizes are not available in all countries or for use on all cytopathogenicity, transmission routes, and ability to cause ARCHITECT i Systems. Please contact your local distributor. However, HIV-2 is less pathogenic than HIV-1, and HIV-2 infections have a longer latency period with slower progression to disease, lower viral ARCHITECT HIV Ag/Ab Combo Reagent Kit (4J27). titers, and lower rates of vertical and horizontal HIV-2 is 1 or 4 Bottle(s) ( mL per 100 test mL.)

7 Endemic to west Africa but HIV-2 infections, at a low frequency compared per 500 test bottle) Microparticles: HIV-1/HIV-2 antigen (recombinant). to HIV-1, have been identified in the USA, Europe, Asia, and other regions and HIV p24 antibody (mouse, monoclonal) coated microparticles of ,37 HIV-2 is classified into genetic subtypes A-G with most in TRIS buffered saline. Minimum concentration: solids. infections caused by subtypes A and ,39 Preservative: Sodium Azide. The key immunogenic protein and antigenic target for serodetection of 1 or 4 Bottle(s) ( mL per 100 test mL. HIV infection is the viral (HIV) transmembrane protein (TMP). Antibodies per 500 test bottle) Conjugate: Acridinium-labeled HIV-1 antigens against the TMP (anti-TMP) consistently are among the first to appear at (recombinant), acridinium-labeled HIV-1/HIV-2 synthetic peptides, and seroconversion of HIV infected ,40-44 The anti-TMP response acridinium-labeled HIV p24 antibody (mouse, monoclonal) conjugates remains relatively strong throughout the course of the disease, as in phosphate buffer with protein (bovine) and surfactant stabilizers.

8 Evidenced by the near universal presence of antibodies against the TMP Minimum concentration: g/mL. Preservative: Sodium Azide. in asymptomatic and symptomatic stages of HIV ,40-44 TMPs 1 or 4 Bottle(s) ( mL per 100 test mL. from HIV-1 groups M and O and HIV-2 are represented in ARCHITECT per 500 test bottle) Assay Diluent: HIV Ag/Ab Combo assay diluent HIV Ag/Ab Combo reagents by five recombinant antigens and two synthetic containing TRIS buffer. Preservative: Sodium Azide. peptides derived from native TMP sequences. The rationale for including Other Reagents three pairs of TMPs is derived from the genetic diversity within HIV-1 and ARCHITECT i Pre-Trigger Solution between HIV-1 and ,5,45,46 Serologic studies indicate that although HIV-1 and HIV-2 share multiple common epitopes in their core antigens, Pre-Trigger Solution containing (w/v). the envelope glycoproteins are much less ,47-51 Antibodies hydrogen peroxide.

9 Elicited against the TMP (or portions of the TMP) of a viral strain within ARCHITECT i Trigger Solution one group or type may react well, poorly, or not at all with the TMP (or Trigger Solution containing N sodium portions of the TMP) from a viral strain of a different group or ,52-57 hydroxide. An exception may be antibodies elicited against HIV-1 group ,12 ARCHITECT i Wash Buffer Early after infection with HIV, but prior to seroconversion, HIV antigen(s) Wash Buffer containing phosphate buffered saline may be detected in serum or plasma The HIV structural solution. Preservative: Antimicrobial Agents. protein most often used as the marker of antigenemia is the core protein, p24. The ARCHITECT HIV Ag/Ab Combo uses anti-HIV p24 in the reagents to detect HIV p24 antigen prior to seroconversion, thereby decreasing the seroconversion window and improving early detection of HIV infection. 2. WARNINGS AND PRECAUTIONS INSTRUMENT PROCEDURE.

10 The ARCHITECT HIV Ag/Ab Combo assay file must be installed on the ARCHITECT i System from the ARCHITECT i Assay CD-ROM. Safety Precautions prior to performing the assay. For detailed information on assay file CAUTION: This product requires the handling of human specimens. installation and on viewing and editing assay parameters, refer to the It is recommended that all human sourced materials be considered ARCHITECT Systems Operations Manual, Section 2. potentially infectious and handled with appropriate biosafety practices. For information on printing assay parameters, refer to the ARCHITECT. System Operations Manual, Section 5. This product contains sodium azide; for a specific listing, refer to the REAGENTS section. Contact with acids liberates very toxic gas. This For a detailed description of system procedures, refer to the material and its container must be disposed of in a safe way. ARCHITECT System Operations Manual. 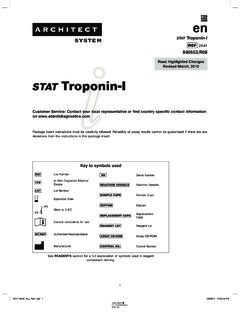 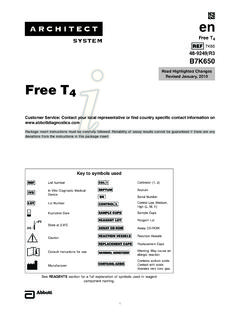 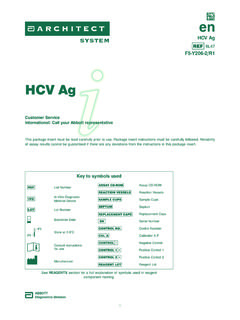 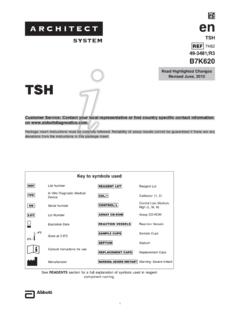 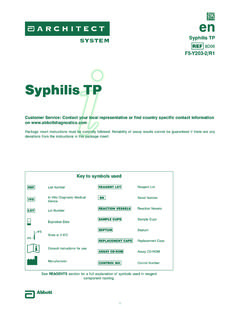 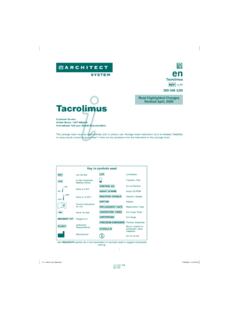 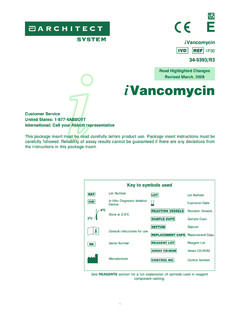 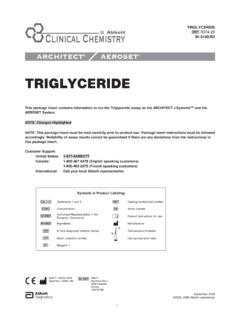 2 NAME TRIGLYCERIDE INTENDED USE The Triglyceride assay is used for the quantitation of triglyceride in human serum or plasma. SUMMARY AND EXPLANATION OF … 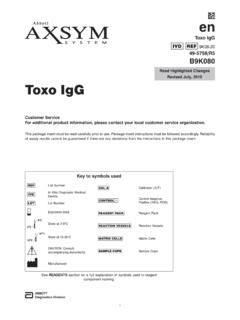 2 NAME AxSYM Toxo IgG INTENDED USE The AxSYM Toxo IgG assay is a microparticle enzyme immunoassay (MEIA) for the quantitative measurement of IgG antibodies to Toxoplasma gondii in human serum or plasma (EDTA, heparin or sodium citrate) and is used

The Importance of Project Handover Documentation • Information and Knowledge: Information and knowledge may be contained in a document, drawing, or database in the form of electronic or hard copy data, 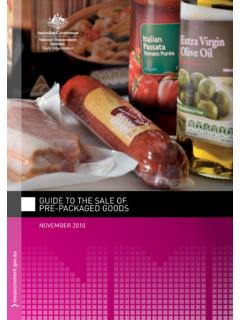 GUIDE TO THE SALE OF PRE-PACKAGED GOODS

G uide to the new trade measurement re G u lations 2009 measurement.gov.au GUIDE TO THE SALE OF PRE-PACKAGED GOODS NOvEmbER 2010 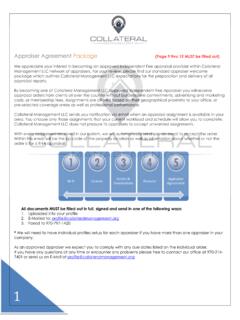 Instructions for Completing the E-ZPass Business …

1. Instructions for Completing the . E-ZPass. Business Application. The name on the account must be the full legal company name. Clearly print your company information. 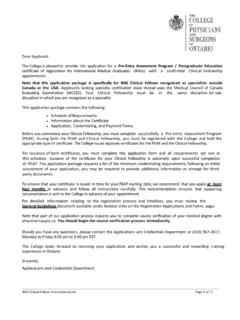 Dear Applicant: The College is pleased to provide this application for a Pre-Entry Assessment Program / Postgraduate Education certificate of registration for International Medical Graduates (IMGs) with a confirmed Clinical Fellowship