3 Dotted lines on maps represent approximate border lines for which there may not yet be full agreement. The mention of specific companies or of certain manufacturers' products does not imply that they are endorsed or recommended by the World Health Organization in preference to others of a similar nature that are not mentioned. Errors and omissions excepted, the names of proprietary products are distin- guished by initial capital letters. All reasonable precautions have been taken by the World Health Organization to verify the information contained in this publication. However, the published material is being distributed without warranty of any kind, either expressed or implied. The responsibility for the interpretation and use of the material lies with the reader. In no event shall the World Health Organization be liable for damages arising from its use.

4 The named authors/editors alone are responsible for the views expressed in this publication. This publication does not necessarily represent the decisions or the stated policy of the World Health Organization. Printed in Switzerland Design: Imagic S rl, Daniel Hostettler ( ) Text editing: David Breuer Cover page photos: Pierre Virot Engaging men and boys in changing gender-based inequity in health: Evidence from programme interventions Contents 2. Executive 3. 1. Introduction: men and boys in a gender 6. 2. Methods, scope and 10. 3. 15. 4. Emerging good practice in Engaging men and 22. 5. Conclusions and suggestions for future 27. 31. Annex 1. Summary of studies on gender-based 32. Annex 2. Summary of studies on 40. Annex 3. Summary of studies on maternal, newborn and child 48. Annex 4. Summary of studies on sexual and reproductive health, including HIV prevention, treatment, care and 52.

7 Engaging men and boys in changing gender-based inequity in health: Evidence from programme interventions Executive summary T. he social expectations of what men and What gender perspective should be applied to boys should and should not do and be di- men and boys in health programmes? rectly affect attitudes and behaviour related Does applying a gender perspective to work with to a range of health issues. Research with men and men and boys lead to greater effectiveness in boys has shown how inequitable gender norms in- terms of health outcomes? fluence how men interact with their partners, fami- lies and children on a wide range of issues, includ- The review analysed data from 58 evaluation ing preventing the transmission of HIV and sexually studies (identified via an Internet search, key infor- transmitted infections, contraceptive use, physical mants and colleague organizations) of interventions violence (both against women and between men), with men and boys in: domestic chores, parenting and their health-seek- sexual and reproductive health, including HIV.

8 Ing behaviour. The Expert Group Meeting on the prevention, treatment, care and support;. Role of Men and Boys in Achieving Gender Equal- ity in 2003 (convened by the United Nations Divi- fatherhood, including programmes to support or sion for the Advancement of Women), the Agreed encourage them to participate more actively in Statement of the 48th Session of the Commission the care and support of their children;. on the Status of Women in 2004, the Programme gender-based violence, including both preven- of Action of the 1994 International Conference on tion campaigns and activities that seek to prevent Population and Development and the Platform for men's use of violence against women as well as Action of the Fourth World Conference on Women programmes with men who have previously used in 1995 (United Nations, 1996) all affirmed the need physical violence against women (sometimes to engage men and boys in questioning prevailing known as batterer intervention programmes).

9 Inequitable gender norms, and a growing number of programmes are doing so. maternal, newborn and child health: pro- grammes Engaging men in reducing maternal This review assessed the effectiveness of pro- morbidity and mortality and to improve birth grammes seeking to engage men and boys in achiev- outcomes and child health and well-being; and ing gender equality and equity in health and was driven by the following questions. gender socialization: programmes that work What is the evidence on the effectiveness of pro- across these four issues (or at least most of them). grammes Engaging men and boys in sexual and and critically discuss the socialization of boys reproductive health; HIV prevention, treatment, and men or the social construction of gender re- care and support; fatherhood; gender-based vio- lations. lence; maternal, newborn and child health; and interventions were rated on their gender ap- gender socialization? 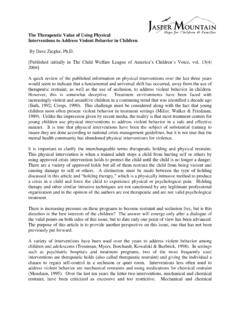 The Therapeutic Possibilities of Physical … 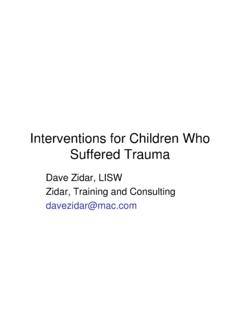 David Zidar Interventions for Children Who Have …

for Gender-based Violence Interventions in … 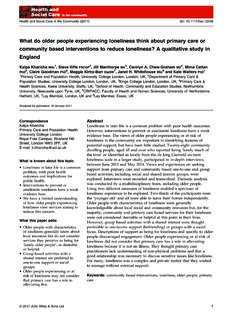 What do older people experiencing loneliness think about primary care or community based interventions to reduce loneliness? A qualitative study in