2 choice (C) can be eliminated most easily, because there is only one independent clause in the sentence. Eliminate (E) as well. The preceding dependent clauses, which all start with if, are not contrasted with the dependent clause that comes after the em-dash quite the contrary. Don't be distracted by (A). Em-dashes are often used to interject a thought that is one step away from the writer 's current thought, but that's not how the writer is using the punctuation mark in this instance. Likewise, be careful of (D). The writer does repeat herself by using the word if, but the em-dash doesn't serve to break up that repetition. Therefore, (B) is the correct answer. The writer uses an em-dash to sum up the details that the preceding dependent clauses express: that she is an optimist. 2. A The first half of this sentence talks about sinners who are able to proclaim that God is good. The second half talks about the writer , an afflicted person who's blind and deaf and able to proclaim that life is good.

3 The question asks what effect the writer intended to give readers by noting the similarities between herself and sinners. choice (B). can be eliminated most easily, because it's not clear whether the writer attends church or not. Eliminate (C) as well, because the writer never states that she's felt the punishment of God, nor could she assume that of readers. choice (E) can also be eliminated. Although the writer clearly aims to persuade people to be happy, the primary effect of these lines is not to express where happiness comes from. Watch out for (D). While this sentence describes sinners as standing up to testify and the writer as rising up in gladness to testify, the effect of the lines is not to engage readers who express themselves with conviction; that would be too small a pool of readers. Instead the writer surely aims to engage all readers. Therefore, (A) is the correct answer. The writer knows readers have experiences with both sinning and affliction, as all humans do.

4 She includes these details to encourage them to relate personally to what she is expressing. 3. E Reread the lines and analyze the writer 's sentence structure. She uses four sentences that begin either with once . or now. choice (D) can be eliminated most easily. Although the writer is talking about events that took place in the past and present, the sequence is not complicated, but quite simple: before and after. Eliminate (C) as well. The writer does use first-person narration, but she doesn't employ it in order to draw comparisons. Watch out for (B). Although the writer does use repetition, and it might contribute to a poetic tone, the primary reason she uses this particular sentence structure was not to produce lyricism. Therefore, (E) is the correct answer. The writer primarily uses this sentence structure to clearly convey to readers the stark contrast between her past, which was full of darkness and fear, and her present, which is full of light and hope.

5 Visit for additional learning resources. 2 AP ENGLISH LANGUAGE AND COMPOSITION PRACTICE Test 1: Answers and Explanations 4. C In these lines, the writer is referring to a very famous proverb ( you reap what you sow, which literally means you gather what you plant ) to express with figurative LANGUAGE her argument that future consequences are invariably shaped by present actions. choice (D) can be eliminated most easily. Although the writer uses the metaphor of farming in these lines ( till my own field ), she's not extolling the virtues of nature. Eliminate (A) as well. The writer would agree with this statement, but she is saying something more specific here. choice (B) can also be eliminated. The relationship productivity has to happiness is discussed elsewhere in the passage, not in these lines. Be careful of (E). The writer is touching on the role of one's own will in forming one's own optimism, but she's not saying that you need to fake happiness to become happy.

6 Therefore, the correct answer is (C). She strategically uses the word unless to say that you must act optimistically in order to obtain happiness, even though the world is sown with good. 5. D In the sixth paragraph, the writer states the importance of evil in obtaining happiness by expressing her personal experience with evil. choice (A) can be eliminated most easily. The writer doesn't provide an example of evil; she provides a description of the effects of evil. choice (B) can also be eliminated. The writer states she has wrestled . with evil once or twice not that it is ubiquitous in life. Eliminate (C) as well. The writer expresses that evil deeds can bring silver linings, or positive outcomes that allay the negative. But this is different than stating that good deeds can be fronts for bad deeds. Don't be distracted by (E). The writer does speak of evil in terms of its positive effects, but she doesn't contrast evil and good. Therefore, (D) is the correct answer.

8 The entire passage is subjective: it comprises her thoughts from her unique, personal point of view. Therefore, the correct answer is (D). The fifth paragraph provides an overview of the role of evil, and the sixth paragraph is logically linked to the previous because it provides details that illustrate that overview. 7. B The writer uses the metaphor of cloud-castles in the context of the American Revolution. She describes the dreamers of the Revolution who created cloud-castles of happiness and then turned pessimists when the inevitable winds rent the castles asunder, meaning when the unavoidable winds blew the castles down. The word inevitable is key in translating this metaphor, as is the notion of a castle made out of clouds. Clouds are particles of water suspended in the air. You can't touch or hold a cloud, and it's always transitioning into its next shape. choice (D) can be eliminated most easily. A cloud can be peaceful but a cloud can also be menacing, such as a storm cloud.

9 Eliminate (C) as well. Although the writer does portray these particular revolutionaries negatively, the cloud-castles are not an allusion to their inexcusable actions. choice (E) might distract you, because the revolution- aries did have ideals that they were fighting for and that they wanted to have as the basis of the colonies. However, that's not what the cloud-castles represent. choice (A) might also distract you, because clouds can be used to por- tray something that's empty or insubstantial as they are merely particles of water, but the writer is not saying that revolutionaries' efforts were empty. Therefore, the correct answer is (B). The writer uses the metaphor cloud-cas- tles to describe the unrealistic notions the revolutionaries had about America. They imagined that the United States would be a perfect country, but no country can be perfect. 8. A The footnotes provide helpful information to answer this question. The writer also supersedes their names with the adjective ineffectual and puts them in the same category as revolutionaries who built cloud-castles of happi- ness unrealistic ideas of happiness that inevitably fell apart.

10 choice (B) can be eliminated most easily, because the footnotes explain that Endymion, Alastor, and Werther are not revolutionaries or even real people. choice (D). can be eliminated as well. The writer does touch on the problems of not living in reality, but she doesn't refer to this trio to emphasize to readers the differences between fiction and real life. Eliminate (C), because the writer isn't talking about herself here. She is being critical of a perspective. Be careful of (E). The writer does refer to the Visit for additional learning resources. 3 AP ENGLISH LANGUAGE AND COMPOSITION PRACTICE Test 1: Answers and Explanations idea of having unproductive or ineffectual notions, but that's not the precise effect of the reference to Endymion, Alastor, and Werther. Therefore, the correct answer is (A). The writer refers to all of these fictional individuals as a way of proving that individuals who are quixotic, or overly idealistic and impractical, are of little use. 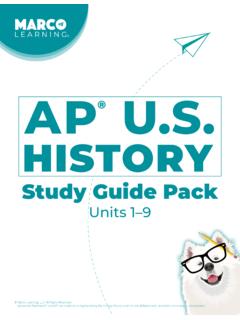 Christianity Cash crops Crops that could be gown in large quantities, harvested, and sold for a profit ... founding fathers developed a government with three branches—the executive, the legislative, and the judicial branches. Even after the disastrous experience 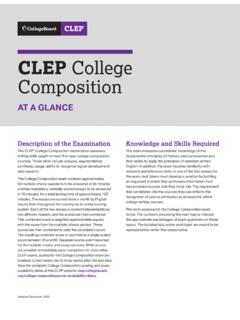 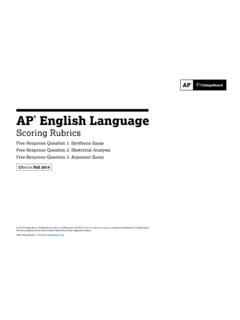 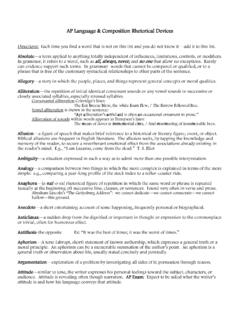 Diction—writer‘s or speaker‘s particular word choice used to make a point in the story. Diction deals with both denotation and connotation. AP Exam—related to style, diction refers to the writer‘s word choices, especially with regard to their correctness, clearness, or effectiveness. 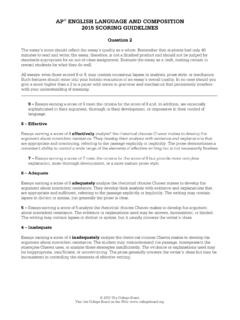 The writing may contain lapses in diction or syntax, but it usually conveys the writer’s ideas. 4 – Inadequate . Essays earning a score of 4 inadequately analyze the rhetorical choices Chavez makes to develop his argument about nonviolent resistance. The student may misunderstand the passage, misrepresent the 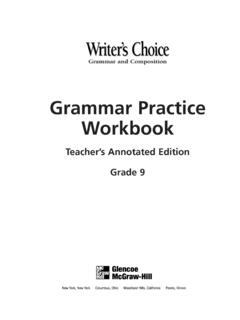 2 Writer ’s Choice: Grammar Practice Workbook,Grade 9, Unit 10 A. Identifying Pronouns Underline all interrogative and relative pronouns in the following sentences. Write whether each is interrogative (I) or relative (R). 1. Who was the woman thatI saw you with at the movies? 2. The singer for whomthe rock opera was written married the ...