Environmental impacts of cocoa production and …

2 In addition to exporting raw cocoa beans, the country also processes some of its beans into finished and semi-finished cocoa products for both the local and international markets. This paper is aimed at providing a compre- hensive picture of the Environmental impacts associated with cocoa production and processing in Ghana by applying the life cycle assessment (LCA) methodology. The analysis considered the entire system required to produce and process 1 kg of cocoa bean. It included the extraction of raw materials ( fossil fuels, minerals), the production of farming inputs ( fertilizers and pesticides) and all agricultural operations in the field ( tillage, fertilizer and pesticides application, harvest, etc.)

3 Transportation of beans to processing factory and industrial processing of the beans into cocoa butter, liquor, cake and powder were also included. The study was conducted in accordance with the international ISO. procedural framework for performing LCA in the ISO 14040e14043 series. The overall Environmental impacts resulting from cocoa production and processing activities and improvement options towards the sustain- ability of the system studied are presented and discussed. 2007 Elsevier Ltd. All rights reserved. Keywords: Ghanaian cocoa industry; Environmental impacts ; life cycle assessment ; Sustainability 1.

4 Introduction Improving the livelihood of farmers is a crucial aspect of government's plans for reducing poverty in Ghana. It has cocoa , which is used mainly in the production of chocolate, therefore been the intention of government, which is commit- is an important agricultural export commodity. Currently ted to reaping the maximum benefit from the cocoa sector, to Ghana, producing about 700,000 tons of cocoa beans annually, ensure that the country increases its cocoa production and also is ranked second in the world, after her western neighbour processes more of the beans into downstream products for Co te d'Ivoire.

5 In terms of quality however, Ghana is recog- both the local and export markets [3]. In pursuance of this nized as the world leader in premium quality cocoa beans pro- goal, the government in year 2001 initiated a nationwide Co- duction. cocoa serves as the major source of revenue for the coa Disease and Pest Control Project (CODAPEC), to help provision of socio-economic infrastructure in the country. In address the two major causes of decline in cocoa production : terms of employment, the industry employs about 60% of pests and diseases.

6 Under this programme, cocoa farms across the national agricultural labour force in the country [1]. For the country were sprayed with insecticides and fungicides at these farmers, cocoa contributes about 70e100% of their an- no cost to the farmers. This exercise has resulted in tremen- nual household incomes [2]. dous increases in cocoa production from 340,562 metric tons in the 2001/02 season to 496,846 metric tons in 2002/03 and * Corresponding author. 736,000 metric tons in the 2003/04 seasons, respectively [1,4]. E-mail addresses: (A.)

7 Ntiamoah), The percentage of locally processed beans has also jumped (G. Afrane). from 20% to 35% with further re-capitalization and expansion 0959-6526/$ - see front matter 2007 Elsevier Ltd. All rights reserved. 1736 A. Ntiamoah, G. Afrane / Journal of Cleaner production 16 (2008) 1735e1740. programs underway to reach a target of 50% in the near future. 1 kg of cocoa beans processed. All the inputs and outputs in The beans are normally processed into four semi-finished the life cycle inventory (LCI) and impact scores produced in products, namely, cocoa liquor, cocoa butter, cocoa powder the life cycle impact assessment (LCIA) phase of this LCA.

8 And cake; and a finished product, chocolate. study were expressed with reference to this functional unit. However, along with the positive effects of the CODAPEC. programme, some negative impacts on the environment have life cycle inventory (LCI) analysis also been caused. For instance the use of pesticides on the farms can lead to the destruction of part of the soil flora and The life cycle inventory (LCI) analysis segment is the sec- fauna through both physical and chemical deterioration [5]. ond phase of LCA. It is an inventory of input/output data with This study was aimed at providing a comprehensive picture regard to the system being studied.

9 The inventory analysis of the Environmental impacts associated with the current cocoa consists of two major steps: data collection and data analysis. production and processing techniques in Ghana, using the life cycle assessment (LCA) tool. LCA determines the potential Data collection Environmental impacts , throughout a product's life cycle , Data for cocoa production were collected from government from raw material acquisition through production , use, end- records on cocoa production in Ghana, and also by paying site of- life treatment, recycling and to final disposal ( cradle- visits to farms and institutions and interviewing cocoa farmers to-grave) [6].

10 And researchers at the cocoa Research Institute of Ghana (CRIG). Background data on production of fertilizers and pes- 2. Method ticides, transportation and electricity generation were included using the Swiss eco-invent database and the GaBi 4 LCA da- The study was conducted in accordance with the ISO pro- tabase. Emissions due to fertilizer and pesticide usage were cedural framework for performing LCAs in the ISO 14040e quantified using estimation methods [10,11]. Inventory data 14043 series [6e9]. According to the ISO standards, LCA for transportation was calculated based on average distance study has four main phases, namely, goal and scope definition, of 250 km traveled by diesel engine trucks in Ghana. 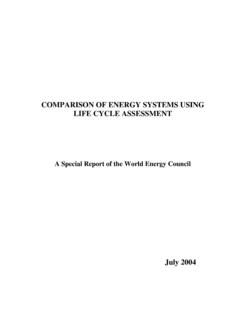 World Energy Council Comparison of Energy Systems Using Life Cycle Assessment 1 FOREWORD Issues are sometimes the subject of studies whose results may be different than expected or even contradictory. 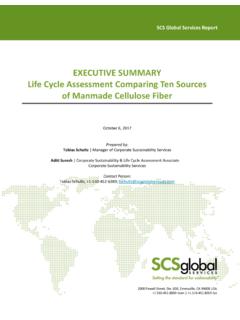 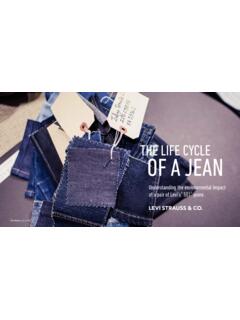 THE LIFE CYCLE OF A JEAN - Levi Strauss & Co

Since then, LS&Co. has made tremendous progress addressing areas within its control, leading to more than one billion liters of water saved to date through the Levi’s